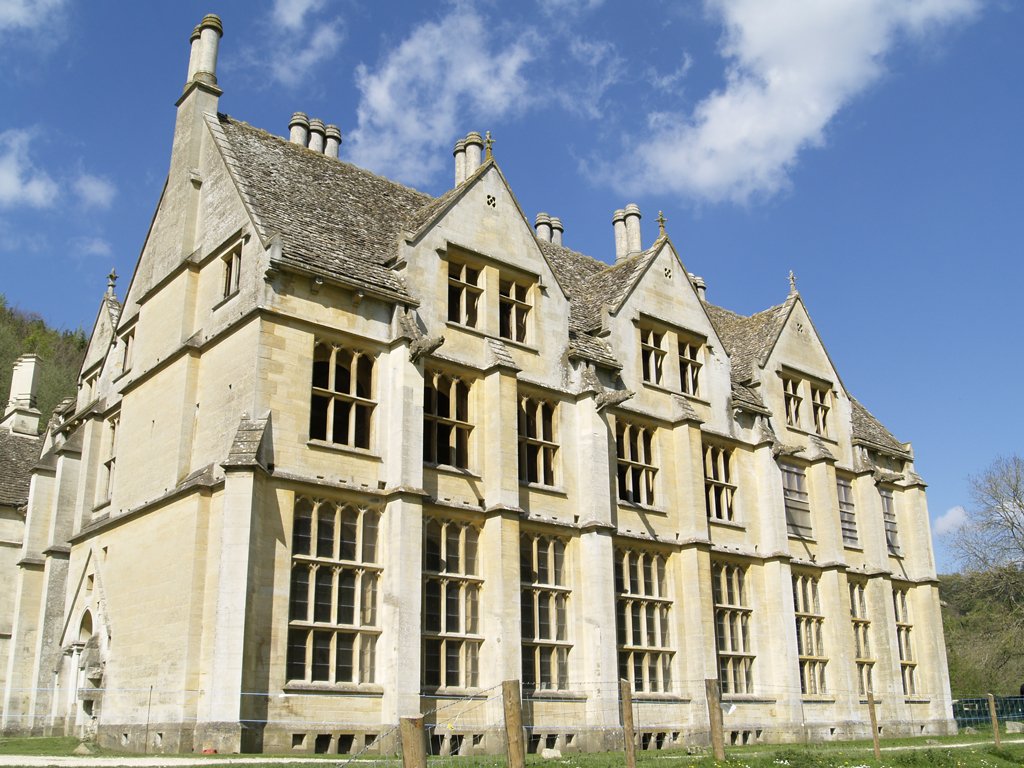 Woodchester Mansion can be found in Woodchester Park, near Nympsfield, Gloucestershire, England. It’s a desolate mansion, built on the spot where once another mansion stood. Although the house looks grand, it’s far from finished on the inside. Woodchester Mansion, in the middle of beautiful lakes and nature, is perhaps England’s most terrifying haunted house.

The history of Woodchester Mansion

George Huntly was the original owner of the estate which he bought in 1564. His plan was to create a deer park for hunting and he constructed a small mansion to stay in while he was on a hunting trip. The expense of creating the park nearly bankrupted the Huntleys and the mansion and its surroundings were sold to Sir Robert Ducie in 1603. The Ducie Family decided to create a grand country house along with a magnificent landscaped park using the original deer park. The park was first to be created. The country house was called Spring Park and the construction was finished in 1750. This is when the Prince of Wales, Frederick, stayed over. And in 1788 it was visited by King George III.

The Ducie Family didn’t use the mansion as their primary residence. They were looking for isolation in their holiday home. That might be why the location of the mansion is quite odd. The house itself is built halfway down the lengths of the valley which reduces the dramatic scenery. Had it been built on a higher spot, the view would have been amazing. The steep sides of the valley also prevent the house for having any sunlight in most parts of the year.

The estate was extensively re-landscaped prior to the visit of King George III. The Ducie’s wanted to create a more naturalistic park, so the new park removed the former formal aspect. The groups of small fishponds were turned into a series of lakes. But also, the house had a make-over a couple of times. Like in 1840, when the 2nd Earl of Ducie wanted further alterations to be done. These alterations cost a small fortune, and when the house needed some repairs, he simply couldn’t afford them. He had to sell the property and found a buyer by the name of William Leigh. Leigh demolished the original house completely and started the construction of Woodchester Mansion as we know it today.

Woodchester Mansion was constructed from 1858 to 1870, but all the work suddenly stopped when Leigh died. His surviving family didn’t like the design, which was a Gothic Revival Style. They asked another architect, James Wilson, for a new design. He created a new, flamboyant Italianate style, but the costs of rebuilding the house were too high for the family and the house was abandoned for most of the time. In 1894, prior to a visit by Cardinal Vaughan, the Roman Catholic Archbishop of Westminster, the drawing room was completely renovated. But once he left, the house was abandoned once again. In 1938, Wilson’s granddaughters Blanche and Beatrice, sold the house to a mental health charity named The Barnwood House Trust. They wanted to turn the mansion into a mental hospital, but this plan was shelved as well.

Woodchester Mansion during and after the War

During WWII, the estate was used as a camp for Canadian and American troops. They used it as a training location for the D-Day landing. During one exercise, a bridge over one of the lakes collapsed and several soldiers drowned. The bodies were brought back to the mansion. After the war, it was abandoned again, but locals made sure the house and the park didn’t fall in total disrepair. A small area of the surrounding land was eventually purchased by the Stroud District Council, which leased it to a building restoration trust, The Woodchester Mansion Trust, in 1992. The National Trust owns the surrounding parkland as well as several buildings like the gatehouse, a boathouse, several cottages and an icehouse (which is like an old-fashioned refrigerator).

The ghosts of Woodchester Mansion

The first ghost stories were told long before Woodchester Mansion was even built. People claim the land on which the mansion is built has been haunted for over 200 years. When the 2nd Earl of Ducie threw a dinner party to celebrate his succession to the Earldom in 1840, the ghost of his father suddenly appeared, crashing the party. He demanded sitting at the head of the table. The 2nd Earl had such a fright, that he left the property shortly after.

Woodchester Mansion is indeed a scary place. It looks finished from the outside, but it’s far from that on the inside. Ceilings and floors are missing, windows are glassless and walls are bare and unplastered. This, and the remoteness of the mansion, makes it the ideal for paranormal investigations. Several mediums have sensed the presence of people in military uniforms inside the mansion. Often, the sound of 1940’s music is heard, echoing throughout the corridors.

The most curious part of the house must be the chapel. William Leigh insisted on having one in the house because he had recently converted to the Roman Catholic faith. Some people report the smell of freshly extinguished candles in the room, even though there are none around. Others claim to have seen a short man standing in one of the chapel doorways. He does nothing, except for gazing up at the ornate windows with a concerned look on his face. Perhaps he was a stonemason while he was alive, concerned about the water penetration which caused a lot of damage during the years of abandonment. He might also be the one throwing small stones at people at the chapel. The ghost of a tall man has been seen here as well on several occasions.

The kitchen is also a paranormal hotspot with at least three ghosts in it. A phantom female voice has been heard singing an Irish lament in here by many. And the ghost of a young man is reported here often, too. He’s crouched in a corner, as if he’s hiding from somebody. He might be hiding from the tall man, who has also been seen in the kitchen many times. He stands in the kitchen doorway and he appears to be looking for someone. The two ghosts never manifest at the same time, which is a good thing because the young man’s hiding place isn’t at all that good.

The ghost of a young girl has been seen while playfully skipping up and down the grand staircase. She doesn’t react to the startled reactions of people who catch a glimpse of her. The ghost of a young woman has been seen and heard on the first floor. She appears to enjoy looking out from the window, gazing at visitors. Massive bangs from within the building are heard very often, there have been cases of poltergeist activity and apparitions have been seen. Mists have been seen throughout the building and shadows tend to follow you around. In 1902, a vicar saw a strange apparition at the mansion’s gate. A phantom horseman has also been seen on the mansions drive.

The dog of the caretaker

Todays caretaker’s dog seems to be very much aware of the ghosts in Woodchester Mansion. It sometimes wags its tale to an invisible person, and it would lick in the air, and the tongue would actually be touching something.

Visitors have collapsed and have been attacked by things they couldn’t see. The ghost of an old woman has the nasty habit of attacking female visitors by grabbing them in the dark. A floating head has been seen in one of the bathrooms. People claim there is an Elemental lurking in the cellar of the mansion. If you want to know what an Elemental is, you should read about it in Leap Castle’s story. The chapel might have been used for satanic rituals, and there’s even a rumor that someone was murdered in the mansion which might have chased the workman away.

The park is open to the public daily and entering the park is free. Public toilets are provided near the mansion. The mansion itself has an entrance fee and is open from April to November. Woodchester Mansion is home to two rare colonies of bats. The park is loved by birds and deer.

In 2012, a mutilated deer carcass was found in the gardens, which might have been the work of a big cat whicht hunts the grounds. The manor and the grounds have been used as a filming location for the second series of The Crown (Netflix). Be sure to visit the haunted Ancient Ram Inn and St. Briavels Castle as well while in Gloucestershire. You won’t be sorry!