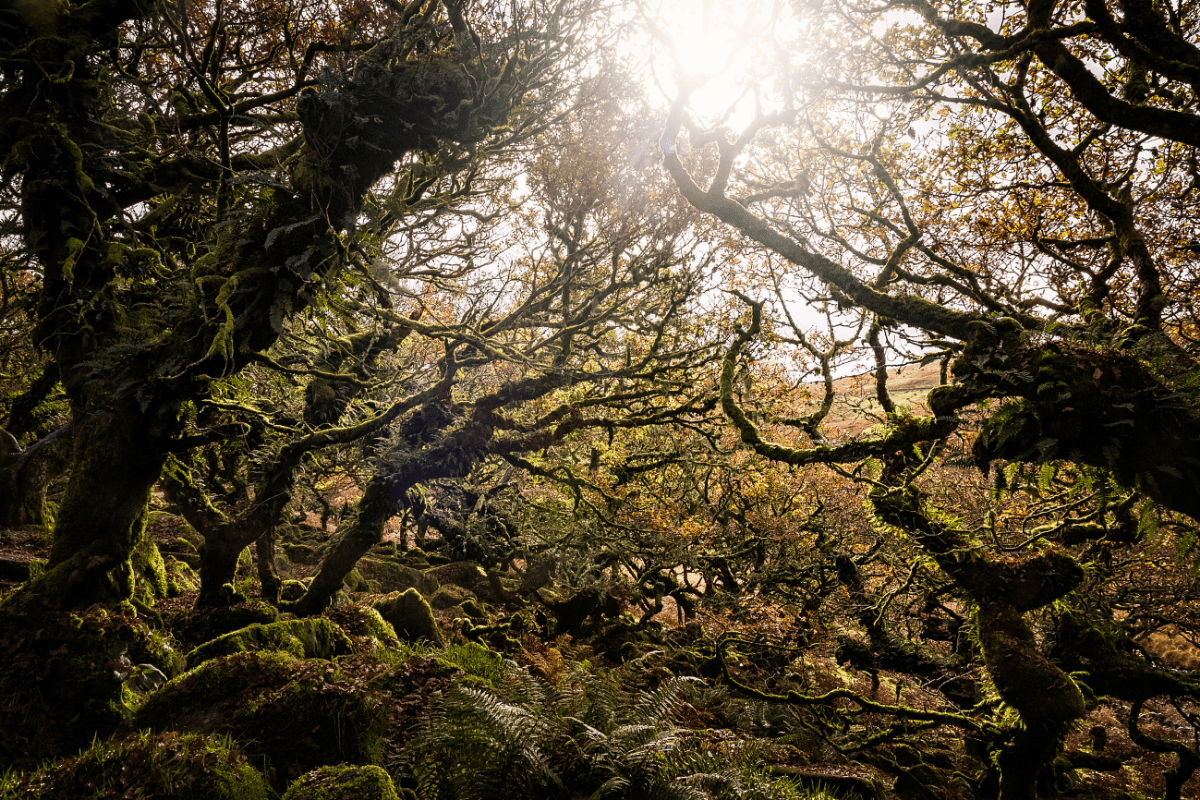 In Dartmoor, Devon, England, you can find an enchanting forest called Wistman’s Wood. This is one of the only three remote high-altitude oakwoods in this area. The woods consists mainly of dwarf oaks, who tend to grow in whimsical shapes. Add some moss-covered stones and liches to that and you’ll have the perfect place where fairies and dwarves will feel at home. But also of something dark.

The history of Wistman’s Wood

Wistman’s Wood is likely to date back at least to 7000 BC. Then this part belonged to an ancient forest that covered much of Dartmoor. The Mesolithic hunters and gatherers probably cleared most of the area around 5000 BC. Wistman’s Wood now covers 3,5 ha (9 acres). It is owned by the Duchy of Cornwall. There is no active management. Visitors, cattle and sheep are allowed in the woods. The trees have developed all kinds of shapes and the main branches tend to lie on or between the rocks. The oldest oaks are between 400 and 500 years old. The naturally developed holes are perfect for the large population of adders. The whimsical branches, the moss-covered stones and the other vegetation is otherworldly: like something straight out of a fantasy world.

The wood of the wise man

The name Wistman’s Wood may derive from the dialect word “wisht” which means wise, but also has a more sinister meaning. It also means eerie, uncanny and even haunted. But, that didn’t keep the poets, the artists and the photographers away. It is indeed a very romantic place. Until the night falls,that is. Locals refuse to enter the woods after dark. And that’s not just because of the venomous adders…

According to the legend, Wistman’s Wood is inhabited by Hellhounds: black vicious demonic dogs with red glowing eyes and a taste for blood. These dogs, also known as Wisht Hounds or Yeth, have everything to do with a phenomena called the Wild Hunt. The Wild Hunt comes from the days the Danish Kings ruled England. Legend says that when the Wild Hunt happens, a supernatural group of hunters will ride the wood in search of souls.

The leader of the Hunt is often a legendary figure such as Odin, a historic figure such as Theodoric The Great or the Danish King Valdemar Atterdag or even a biblical figure such as Cain, Gabriel or even the Devil himself. The Hellhounds guide the hunters. These hunters are either the souls of the dead of fairies or elves. If someone would witness the Wild Hunt, it would lead to catastrophes such as plague, war or even death.

Wistman’s Wood was also sacred to druids. This was the place where they gathered for their secret worshipping. A large stone still reminds people of these days. The Druid’s Stone, or Buller Stone, still remains. It is said to be a portal to the paranormal world.

Wistman’s Wood is said to be haunted by a little dog named Jumbo. The little terrier has been seen chasing after rabbits. His cries are often heard echoing down the valley at night. The poor dog is believed to be bitten by one of the venomous adders.

Close to the northern edge of the wood there is said to be an ancient lych way or “way of the Dead”. Corpses would be carried along these tracks for burial at Lydford. There have been reports of a ghostly procession of monks wearing white robes. They have been seen walking the oak wood in silence.

Wistman’s Wood is pretty much untouched, mainly because of the large stones. It’s an outstanding example of native upland oak woodland and is therefore an NCR (a Nature Conservation Review) site since 1964. Unfortunately, during the first Covid-19 pandemic lockdown, the number of visitors increased dramatically. Some damage has been done to the woods. So, if you visit Wistman’s Wood, be sure to handle it with care!

Do you want to read more stories about haunted woods? Click here!