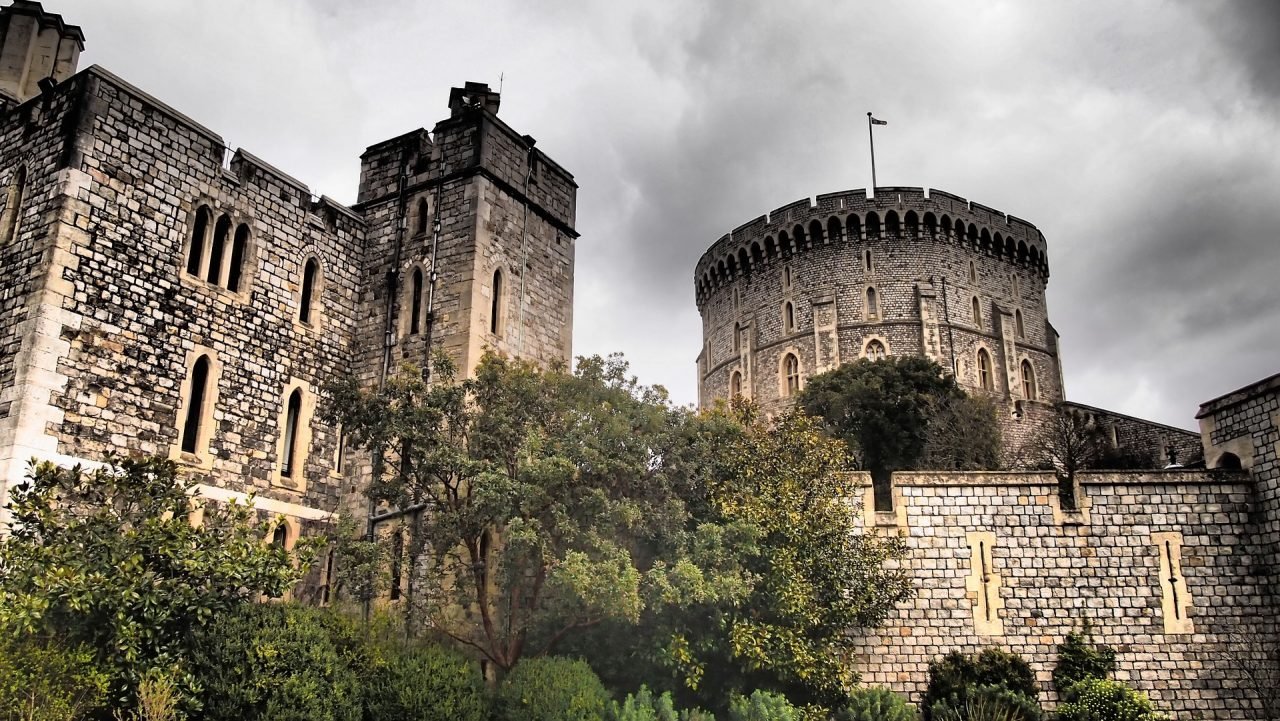 When I was 17 years old, I went to London with my mother. The final excursion day included Windsor Castle. We watched the parade and bought some souvenirs in the local shops. Unfortunately, there was no time to visit the Castle, which I regret until this day. Because this place has some stories to tell!

The history of Windsor Castle

Windsor Castle is a royal residence in Windsor, which is in the English county Berkshire, about an hour’s drive away from downtown London. It is considered the oldest and largest inhabited castle in Europe. It was built by William the Conqueror, just a decade after the Norman Conquest of 1066. Windsor Castle was part of a defensive ring of motte and bailey castles around London.

Each of these castles were a day’s march from the city and from the next castle. This allowed William to quickly have his troops ready when necessary. Windsor Castle was strategically a very important place. It was near the River Thames and an important medieval route to London. And, also important, it was near a royal hunting preserve which had always been used by Saxon kings.

Originally, Windsor Castle wasn’t a royal residence. It was Henry I, son of William the Conqueror, who was the first one to live there during his reign. It was the epicenter of the First Barons War (1215 – 1217). This was a civil war in which a group of landowners (the Barons) waged war against King John of England. Their leader, Robert Fitzwalter, is often referred to as the “real Robin Hood”. Anyway, this riot led to the signing of the Magna Carta.

Gradually, the wooden castle was converted into a stone castle and Henry III spent most of his money remodelling it. For example, he added a luxurious palace within the Castle’s walls. Edward III went even further. He designed St. George’s Chapel (1475 – 1511), a chapel in which several British monarchs were laid to rest. His core design lasted through the Tudor period. Henry VIII and Elizabeth I used Windsor Castle as a royal court and center for diplomatic entertainment.

During the English Civil War (1642 – 1651), the Royalists (the Cavaliers) had to defend themselves against the Parliamentarians (the Roundheads). The Parliamentarians drew the longest straw and King Charles I was imprisoned in 1648 at Windsor Castle. A month later he was beheaded in London and his corpse was returned to the Castle to be buried in St. George’s Chapel. He was buried alongside Henry VIII, Henry’s third wife Jane Seymour and several other monarchs.

Windsor Castle after the Restoration

Charles II, son of the beheaded Charles I, reclaimed the throne in 1660. He immediately moved into Windsor Castle and rebuilt it, creating a set of extravagant Baroque interiors. During the 18th century, Windsor Castle was neglected, but George III and George IV renovated it again, restoring most of Charles II’s work. During WWII, the royal family found refuge in the Castle and it survived a massive fire in 1992. Today, Windsor Castle is the weekend residence of Queen Elizabeth II. During the Covid-19 pandemic, the Queen made her permanent residence here. But she has to share Windsor Castle with at least 25 ghosts.

The ghosts of Windsor Castle

As said, Windsor Castle is haunted by at least 25 ghosts. These have been “identified”, even though not all of them are known by name. Former royals can’t seem to let go of the Castle. Let’s take a look at the hauntings.

Another frequent ghostly visitor of Windsor Castle is King George III. He has been seen in the room below the library. He was held there whenever he had one of his “episodes”. The King suffered from a mental disorder. People have seen him looking out of the window. George III spent much of his time at Windsor Castle. Every day, he would pass by the guards and he would answer their salute. When he died, he wasn’t buried immediately. While his body was still above ground, one of the guards passed the King’s window. He unmistakably saw the figure of the King. Instinctively the guard saluted the King. And the ghost of the King saluted back.

King Henry VIII also haunts Windsor Castle. The obese king suffered from painful (and smelly) ulsers on his leg. His ghost has been seen limping around the Castle, looking angry. Occasionally he’s seen shouting as if he’s still giving orders.

Henry VIII’s second wife Anne Boleyn is also said to haunt Windsor Castle. In 1536, Anne was beheaded by orders of the King for treason, witchcraft and adultery. Anne’s spirit has also been seen at Blickling Hall and Hever Castle. Here, at Windsor Castle, people have seen her weeping spirit behind a window of the Dean’s Cloister.

Some sources claim Queen Victoria still holds sway at Windsor Castle, even though her home residence was Buckingham Palace. Her grandson Edward VIII wanted to remove a family tree at his wife’s request. Well, the ghost of Queen Victoria has put a stop to that. When workmen were ready to take her tree out, her ghost suddenly appeared heavily moaning and waving her arms. The terrified workmen refused to finish the job and the tree still stands.

Something strange happened while Charles I was buried. As I said before, Charles I was buried in the St. George’s Chapel. As his black-draped coffin was being carried toward the chapel, a sudden blizzard swept across the grounds. It had been clear and cloudless up until that moment! The pall over the coffin turned completely white. Many took this as a divine sign proclaiming the King’s innocence. Several people have seen the apparition of King Charles I in the Canon’s House in the precincts of the Castle.

Even though he wasn’t a royal, I find the story of Herne’s ghost the most interesting one. Herne the Hunter was King Richard III’s (1452 – 1485) favourite huntsman. He once saved the King’s life from a cornered stag but got mortually injured himself. According to the legend, Herne was healed by witchcraft. But, this came with a price. A set of antlers grew out of his head. It is said that Herne hanged himself from an oak.

Each Winter, Herne’s ghost returned to the oak tree in Home Park. On August 31, 1836, Herne’s Oak fell. The logs were burned at the Castle to make sure the ghost of Herne was burned along. Seeing Herne’s ghost was looked upon as a token of misfortune. One log was not burned, though. Instead it was carved into a bust of Shakespeare. Herne is mentioned in his play “the Merry Wives of Windsor” (1597). Shakespeare’s bust can now be seen in the Windsor and Royal Borough Museum in the Guildhall.

The Duke of Buckingham

George Villiers, the Duke of Buckingham, is believed to haunt one of Windsor Castle’s bedrooms. He is rumoured to have been the lover of James VI and I. He doesn’t bother anyone, he’s just around.

In 1927, an 18-year-old Grenadier Guard had the night shift at the Castle’s Long Walk. At night, amazing views can be seen from here, but it’s an eerie place now. That night, the young man took his own life by shooting himself in the head. A week later, another guard worked night shift at the Long Walk. He was happy to hear the footsteps of his relief approaching, but when he turned to greet his collegue, he gazed in the eyes of his friend whi had committed suicide. Terrified, the guard returned to base where he shared his experience. It turned out he was not the first one to have encountered his dead colleague.

The Castle’s kitchen is a very active place. It is haunted by a man, a little girl, a lady in white and… a horse! The horse has been seen wandering through the wall. Back in the days, the kitchen used to be one of the Castle’s cavalry stables. So it makes sense that it’s haunted by a horse.

In 1873, a nighttime visitor of Windsor Castle had a strange encounter. When he reached St. George’s Chapel, he noticed that four new statues had been placed. All the statues were black, three figures were standing up and one was crouching down. One of the three standing statues held a sword in a way that it was ready to strike at the crouched figure. When the visitor passed a guard, he mentioned the statues to him. The guard answered that there were no new statues, let alone black statues. When the visitor went back to check, they were gone.

Other ghosts at Windsor Castle

The Norman Gate, near the Round Tower, is haunted by an unknown Royalist prisoner from the Civil War. Only children can see him, adults only feel him brush past them. A little boy can be heard shouting “I don’t want to go riding today!” in the Deanery. Phantom footsteps are heard at the Curfew Tower. Big temperature drops and bells that start swinging by themselves are “normal” there, too. And architect William of Wykeham still walks around the castle, checking if everything is still okay. Even though he died in 1404.

Today, Windsor Castle is a popular tourist attraction. It’s also a venue for hosting state visits. The Corona pandemic turned the castle into the main residence of Queen Elizabeth II. Before the pandemic, she lived in Buckingham Palace and visited Windsor Castle on the weekends. I really have to visit this place! Have you ever been here?

Do you want to read about other haunted places in Europe? Click here!