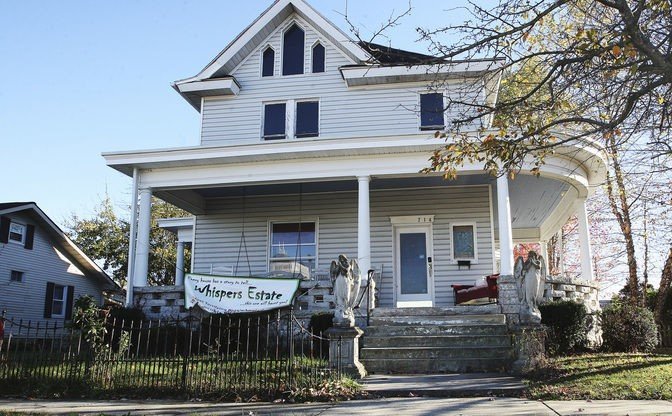 In the city of Mitchell, in the American state of Indiana, you can find a beautiful white Victorian House. From the outside, it looks like a normal peaceful house, but that changes when you are in. People have been physically attacked by an entity which resides here. But, who is this aggressive entity? There are a couple of possibilities, because the house is haunted by several spirits.

The history of Whispers Estate

Whispers Estate was built in 1894 and home to Dr. George and Sarah White for a short time before they sold it to Dr. John Gibbons and his wife Jessie in 1899. The couple sadly couldn’t have children of their own, so they adopted three orphaned children whom they loved dearly. But soon the tragedy started. Ten-year-old Rachael snuck out of bed on Christmas morning 1921, to peek at her Christmas presents. They were next to the fireplace.

Rachael accidently came too close to it and her clothes caught fire. Rachel got badly burned and died at the house two days later. John and Jessie were literally heartbroken. But tragedy didn’t stop there. Their infant daughter Elizabeth, who was only 10 months old, suddenly died in the master bedroom. Cot death was the conclusion, but the real cause was never found. Heartbroken again, Jessie got very ill with pneumonia and died only two weeks after her little girl. Whispers Estate was not a happy home to the Gibbons.

This house is haunted

In 2006, the house was bought by somebody who wanted to turn it into a bed and breakfast. The house had been vacant for a while and desperately needed renovating. When the house was being renovated, strange things started to happen. People started hearing disembodied whispers that came from all over the house. The house was then named Whispers Estate. But that’s not the only supernatural thing that happened.

The ghosts of Whispers Estate

The master bedroom sometimes strongly smells like baby powder, even though there are no babies around. Sometimes sounds of a baby crying can be heard as well. People who have stayed in this room feel as if they are suffocating, or as if somebody is sitting on their chest. Is this because Jessie Gibbons died of pneumonia in here? The closet in this room is also very haunted. The doorknob is known to jiggle for a while before the door opens by itself. Many people have experienced this phenomenon.

Disembodied footsteps have been heard as well. Small, light-footed steps are the most common. They probably belong to Rachael, but there is another ghost child at the house, as well. A little boy fell down the stairs and died. His spirit has been picked up by psychics on several occasions. When you hear heavy footsteps, be cautious. This sound is almost always associated with growls, pushing, scratching and even biting.

A large shadow, called the Big Black, has been seen in the doctor’s room. Dr. Gibbons had a general practice at the house on the 1st floor for about 26 years. Patients have died in the house. But the psychics claim that the Big Black isn’t of this world. This black mass also moves around in the house. It hasn’t been violent so far, but it’s terrifying. Speaking of the doctor’s practice: according to some psychics there are at least 4 graves in the backyard. As well as a pit-grave, where amputated limbs, internal organs and aborted fetuses were dumped. The doctor himself haunts the premises as well. He is known for whispering in young women’s ears and he likes to grab and touch people in inappropriate ways.

People claim that inside the house there is a portal which runs from the front parlor into the 3rd floor room/attic. The room in the attic is said to be the heart of the house. Guests brave enough to have spent the night here, claim to have had terrible nightmares and they also say that something tried to enter their room through the door at night.

Other ghosts and creepy things

Another ghost the psychics have picked up on is that of a gentleman in his 50’s or 60’s. He died in the upstairs bathroom, probably of natural causes. Guests report feeling earthquake like tremors in the doctor’s bathroom. Some beds tend to shake violently when guests sleep in it. Strange smells like cologne, aftershave, cigars, meat, cabbage and dirty medical bandages have been noticed by visitors as well. A group of women who felt compassionate towards Rachel, brought along a doll when they visited the house. They took it up to what used to be her room. A while later, the doll was found on the foot of the stairs. It smelled like smoke and it was slightly burned.

The house was up for sale for only $ 130.000 dollars, including all the furniture. Today, it’s still open to the public, but beware of the fact you might get scratched when you visit. Would you dare to visit this place? A special thanks to Rich Ballard, owner of the Whispers Estate for the pictures.

Do you want to read about more about haunted places in America? Click here!