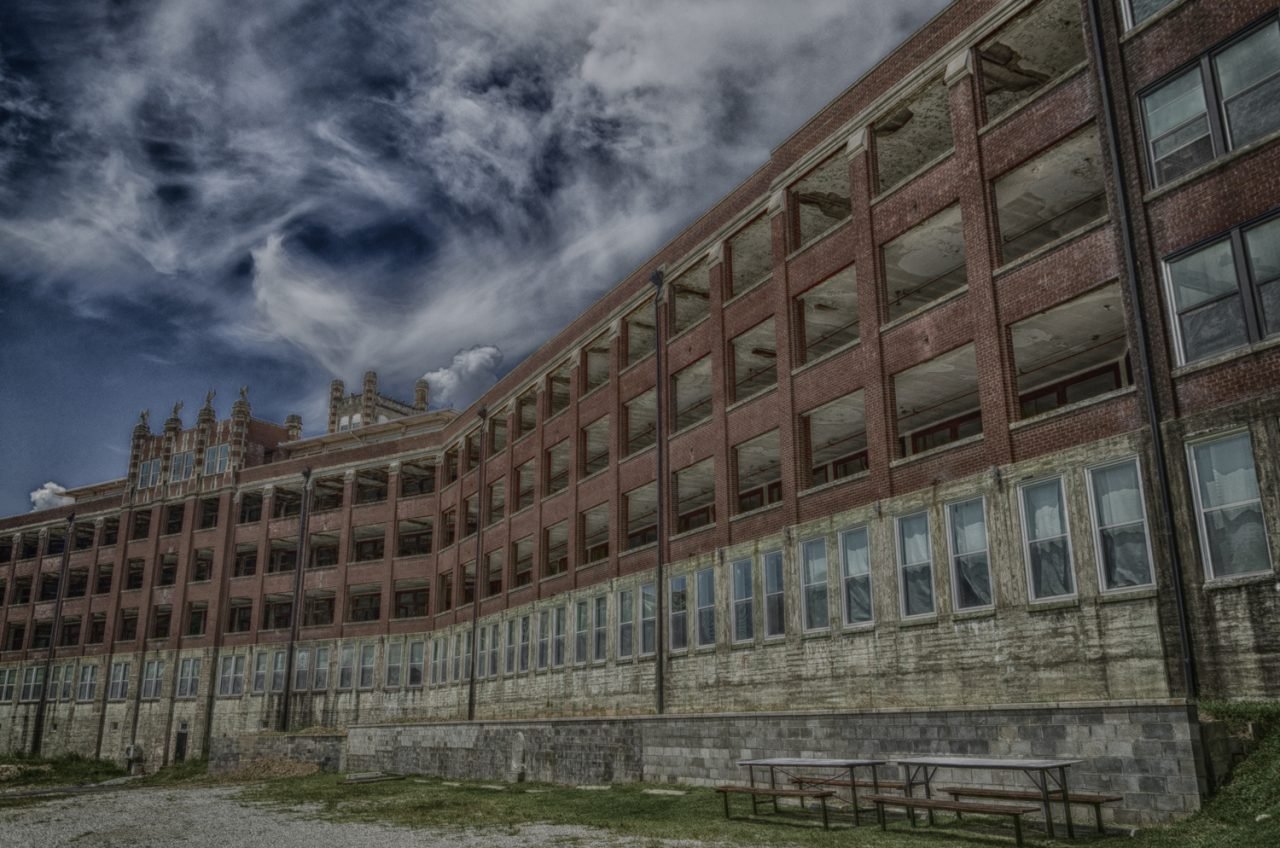 In the southwest of Louisville, Kentucky, lies the Waverly Hills Sanatorium. This sanatorium was founded in 1910 as a two-storey infirmary to house 40 to 50 patients who suffered from the lung illness tuberculosis. Even though Waverly Hills has been shut down since 1982, it’s still the talk of the day. There’s no place in the world where there is more paranormal activity then here.

In 1924 three more floors were built on top of the first two of the Waverly Hills Sanatorium because Jefferson County was facing a major tuberculosis outbreak. Tuberculosis is often referred to as the “White Plague”. After the renovation 400 more patients could be looked after. Because this illness was so extremely contagious, it was impossible to leave the sanatorium. Well, maybe between six shelves. So not only patients, but also doctors, nurses and other members of the staff, had to say goodbye to their families. Healthy children of the patients were housed in a separate wing of the sanatorium. Waverly Hills was self-sufficient. There were vegetable- and fruit gardens, a water treatment plant and there were animals that they kept for milk, eggs and meat. It even had its own zip-code and post office.

During the big outbreak there were no medicines against tuberculosis yet. The staff tried to do what was best for the patients. Sunlight, fresh air and a lot of bed rest were the best they could do. So the patients were put outside along with their beds to absorb as much fresh air and sunlight as they could. Even in the midst of Winter. There are pictures that show patients who are literally covered in snow while they are “recovering” in the yard.

But it gets worse! Because there was no medical treatment, they started experimental treatments. One of these treatments was to place little balloons inside the ill lungs to stretch them. Ribs and muscles were removed to give the lungs more space. Sometimes they deliberately caused a collapsed lung to give the lung some rest. The last straw was the lobectomy, where an entire lobe of the lung was removed. Just a few patients lived to tell about it.

The Tunnel of Death

A lot of people lost their lives at Waverly Hills. According to the legends a total of 63.000 people died here, but the more exact numbers say that 8.212 people lost their lives at the sanatorium. And that’s still a lot! Beneath Waverly Hills is a 500 ft (150 meter) long tunnel that the staff used for entering and exiting the building and to help bring up materials. When the illness, and thus the number of deaths, was at its peak, the staff used this tunnel to carry the bodies outside. They didn’t want to upset the other patients. The tunnel was then transformed as a body shute.

When finally antibiotics were invented, tuberculosis was suppressed and the number of patients gradually lessened. In 1961 the sanatorium was even shut down. This didn’t last long, because it was re-opened again in 1962 as the Woodhaven Geriatric Center. It became a place for demented elderly and severely disabled people. Woodhaven was closed already in 1982 because of neglect of the patients.

The sanatorium was almost demolished in 2001 because it was turned into a ruin. Ever since the place was vacant, it turned into a magnet for teenagers looking for a thrill and homeless people looking for shelter. Because of the history of Waverly Hills, people believed it was haunted. Many broke into the place in search of paranormal evidence. The result was a vandalized and trashed location. Fortunately, it fell in the hands of Charlie and Tina Mattingly. They saved the building from demolishment.

Since Charlie and Tina bought the sanatorium, it is being used for ghost-tours. In the Fall it does even be turned into a haunted house. And in spite of the fact the original energy has changed  because of this, a lot of paranormal activity occurs. There are many people that have seen, felt or heard something.

The most notorious room in the building is room 502. Nurse Mary Hillenburg committed suicide here in 1928. She hung herself with an light fixture. People think she did so because she carried the child of a doctor. They weren’t married and she feared the contamination of tuberculosis. She presumably took her own life because of this. In 1932 another nurse jumped to her death from the same room’s window. Years later, a homeless man was murdered in this room by a drug gang. Room 502 has a negative vibe to it. Often the words “Get Out!” are heard here when people want to step inside.

Other spirits of Waverly Hills

On the roof, where the children were given their sun-therapy, the creepy song “Ring around the Rosy” is heard. In the kitchen, a male figure with a white coat is seen. His appearance is often associated with cooking-smells like freshly baked bread. But it’s impossible to prepare food in this room because it’s a ruin now. On the third floor, the children’s wing, a girl without eyes is often seen and there is a boy there that’s playing with his ball. Near the sun-rooms, where patients were treated with ultraviolet light, a woman with bloody wrists is regularly seen. She has been seen running through the halls while she is screaming for help.

Lights are seen from the outside, which is impossible because the power has been shut down for years now. Many people also claim hearing footsteps, disembodied voices and other ghostly sounds. Doors slam shut by themselves and apparitions are seen in the doorways and corridors. Things have been thrown at people by invisible forces and some claim they have been touched by unseen hands. And last but not least; people have seen a phantom hearse that appeared on the back of the building. Probably to pick up the coffins.

You can book ghost tours and even spend the night here. But, you can only visit when you have made a reservation. Going there without a reservation means you’re trespassing and that’s against the law. Would you dare to visit this very haunted place?