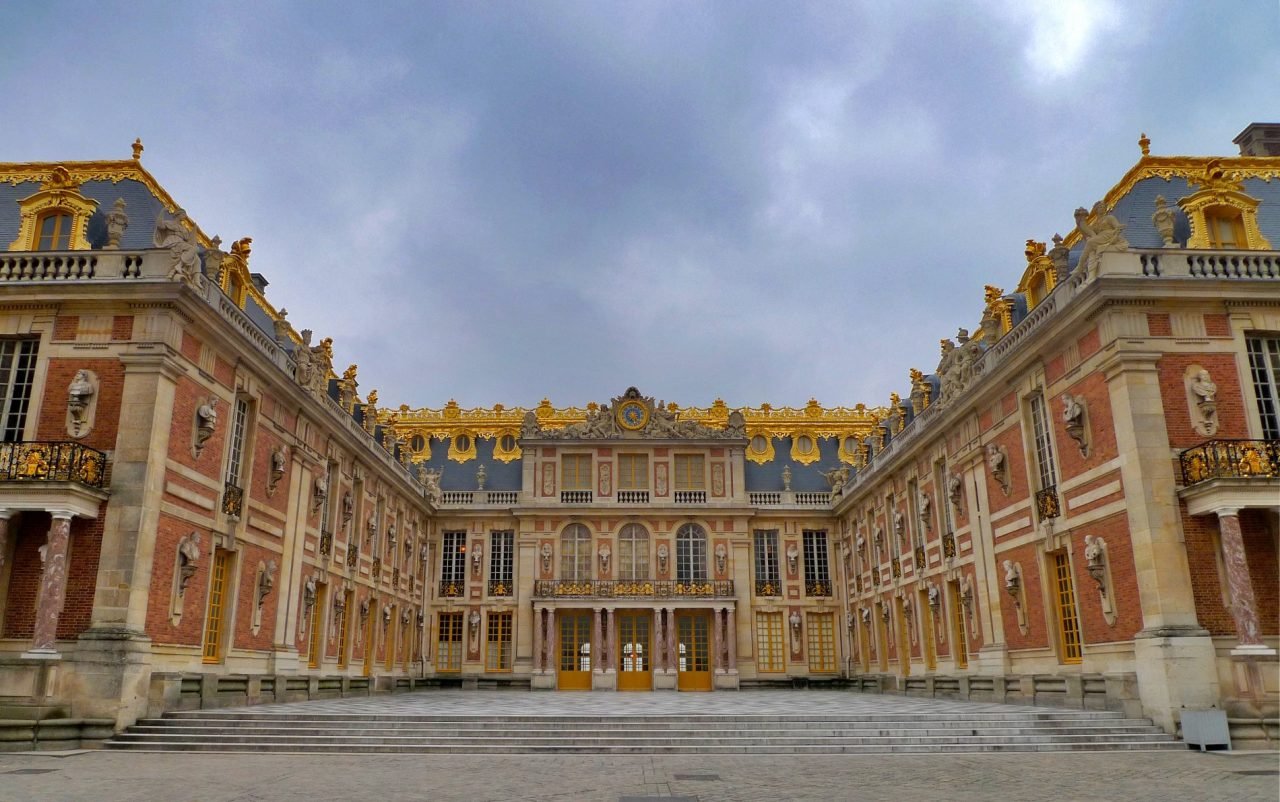 The Palace of Versailles: a building, just outside Paris, which started off as a modest hunting lodge for King Louis XIII, is now a massive building surrounded by an enormous garden. On its peak, more than 10.000 people lived and worked at this French palace. So much history on one location can only mean one thing: ghosts.

The history of Versailles

In August 1607, the young Dauphin (French Crown Prince) Louis XIII visited Versailles for his first hunting trip. He was then 5 years old and fell in love with the place immediately. His father, Henry IV of France, was proud of his son for finding this beautiful piece of land. The Dauphin, however, didn’t return to Versailles until 1617. Crowned King at the age of 8 in 1610, after his father was murdered by a man named Francois Ravaillac, he had other things on his mind.

But, when he returned, Versailles felt like home again. It wasn’t until 1623 that a small hunting lodge was built where later Versailles would arise. King Louis XIII started using this lodge in 1624. He decided to rebuild it in 1631. This would be the basis of the palace as we know it today. A very important, historic event took place at this palace: The Day of the Dupes.

The Day of the Dupes

The Day of the Dupes took place around 11 November 1630. The King’s mother, Marie de’ Medici, got into a political disagreement with Cardinal Richelieu. She wanted the Cardinal’s career to be over and was convinced of the fact her son, the King, would be on her side with this. She was wrong about that. King Louis XIII surprisingly took side of the Cardinal, Marie eventually exiled herself to Compiègne.

Kings Louis XIII’s successor, Louis XIV, simply loved Versailles. He changed the palace into his residence and even moved the French Court and Government into it in 1682. When Louis XIV died, it was far from finished, but the foundations of the grand palace were made during his reign. When Louis XIV had died, the Court abandoned Versailles, and a long period of neglect followed. In June 1722, young Louis XV returned to Versailles at his own request. He wanted to complete the work of his predecessor. Louis XV wasn’t very charmed by the large, public spaces inside the palace, so he created smaller, more private rooms.

He also completed the Royal Opera House, which Louis XIV had started. Even though he loved the place, he never lived there. In 1757, Louis XV was stabbed between the ribs by a man named Robert-Francois Damiens while leaving Versailles. King Louis had been wearing many layers of clothing because it was Winter, which saved his life.

Damiens was tortured, drawn and quartered, like Ravaillac years earlier. Damiens had served the French Army and was frequently around the French Parliament. The Parliament didn’t approve some of Louis XV’s actions. Damiens was easily influenceable, which led to the failed assassination. But the public started questioning the French monarchy and the first cracks appeared.

The most famous and impressive hall of Versailles, The Hall of Mirrors, has a dark story to it. In the 17th century, it was decided that all materials and constructionwork on the Palace should be made in France. Because the art of making mirrors was a Venetian one, that was a problem. So, to get what they wanted, a few Venetian artisans were convinced in creating this marvelous hall. In response, the Venetian Government ordered the artisans to be assissanated. This was to protect their mirrormaking techniques from the French.

This might have been the very first step towards the French Revolution. Louis XV’s successor, Louis XVI and his wife Marie Antoinette, might have been the drop. Marie Antoinette simply loved her wealth, jewels and life at Versailles. But outside the palace, people were poor and hungry. At one point, bread was nearly impossible to get in France. Marie simply stated the French should eat cake instead. She had no idea what went on outside the palace. This and her extravagant parties and heavy taxes angered the public. Things got worse by an incident called the Affair of the Diamond Necklace. Marie Antoinette was innocent in this matter, but it did cause the French public to hate her even more.

The Affair of the Diamond Necklace

Cardinal Rohan, Grand Armoner of France, led an extravagant life, which annoyed Marie Antoinette. So, he fell out of favor with her. And he wanted nothing more than to regain her favor. The self-proclaimed Countess of La Motte, Jeanne de Valois-Saint-Rémy, offered to help him. She convinced the cardinal she was a close friend of Marie Antoinette. But she wasn’t. She hadn’t even met the woman. The “Countess” was in fact in imposter and a thief. She smelled an opportunity and told the cardinal she would arrange a nocturnal meeting. Standing in the shadows, a Queen look-a-like (who was in fact a prostitute), told the cardinal he could make it up to her.

All she wanted in return was a diamond necklace. The exclusive diamond necklace she talked about was made by the Crown jewelers Böhman & Bassenge. The necklace was in fact beautiful but exorbitantly expensive with over 650 diamonds weighing 2800 carats. The cardinal made the jewelers a deal and he bought the necklace for the Queen. He gave it to the Countess who told him that she would give it to the Queen on his behalf. But that necklace never reached Marie Antoinette, and the diamonds were sold by the Countess’ husband, Nicholas.

Off with their heads!

Anyway, the jewelers never got their money and they wrote letters to the Queen asking what had happened. She knew nothing of this entire incident and the cardinal was arrested. He was set free, the Countess and her accomplices were arrested, so all went well in the end. You’d think. Louis XVI and Marie Antoinette wanted to prove their innocence of the matter in court, but the opposite happened.

The French public had enough. And the Revolution was a fact. The two Royals were arrested in Versailles and later both beheaded by the guillotine. At least the French King was spared the humiliation a bit. He was brought to the scaffold in a glass coach. Marie Antionette on the other hand, was brought to the scaffold in a dung cart. When she was decapitated, many soaked their sleeves in her blood.

The ghosts of Versailles

In a place that old, once home to so many, many stories can be told. Disembodied voices, footsteps and other strange phenomena have been witnessed by many. Full body apparitions of historically important people have been seen, as well as King Louis XVI and Marie Antoinette. They have been seen throughout the palace and the gardens, and this latter is also where the strangest story comes from.

Anne Moberly and Eleanor Jourdain visited the palace in August 1901. The two women took this trip to get to know each other better, for they would be working closely together at their new school, the St. Hugh’s Girl’s School, where they would become principal and vice-principal. They decided to visit Petit Trianon, the personal castle of Marie Antoinette.

But the place is so massive, the two ladies got lost in the palace garden. They crossed a bridge and found themselves surrounded by smaller buildings and people wearing old-fashioned clothing. A man with a scarred face, probably due to smallpox, stared at them before disappearing. They also saw a lady sketching in the garden. The two women felt extremely uneasy and uncomfortable. Along with a feeling of dread they could not explain.

A footman walked towards them, telling them they went the wrong way. He pointed them a direction, and the two women followed this. Suddenly, the uneasy, sad feeling was gone, and everything looked normal again. The two women didn’t speak of the strange event until months later, when it came up again. Both women claimed to have seen the same thing. After doing some research they were convinced they were inside the scene right before Marie Antoinette’s arrest.

In fact, they claimed the woman they saw sketching was indeed Marie Antoinette herself. They even wrote a book about it in 1911, named “An Adventure”. They used the pseudonyms Elizabeth Morison and Frances Lamont. This is now known as the Moberly-Jourdain incident. Though their paranormal encounter has been questioned by many, how do you explain their very accurate description of buildings and bridges that weren’t there in their time, but were in Marie Antoinette’s?

The Court left Versailles in 1789 and never returned. Even Napoleon didn’t want to settle in the palace because of its debatable reputation. Fact remains that it has been a museum since 1837 and still is today. The palace is open to the public daily except for Mondays. It’s massive and beautiful so it’s worth the visit. And who knows, perhaps you’ll experience a time slip yourself…