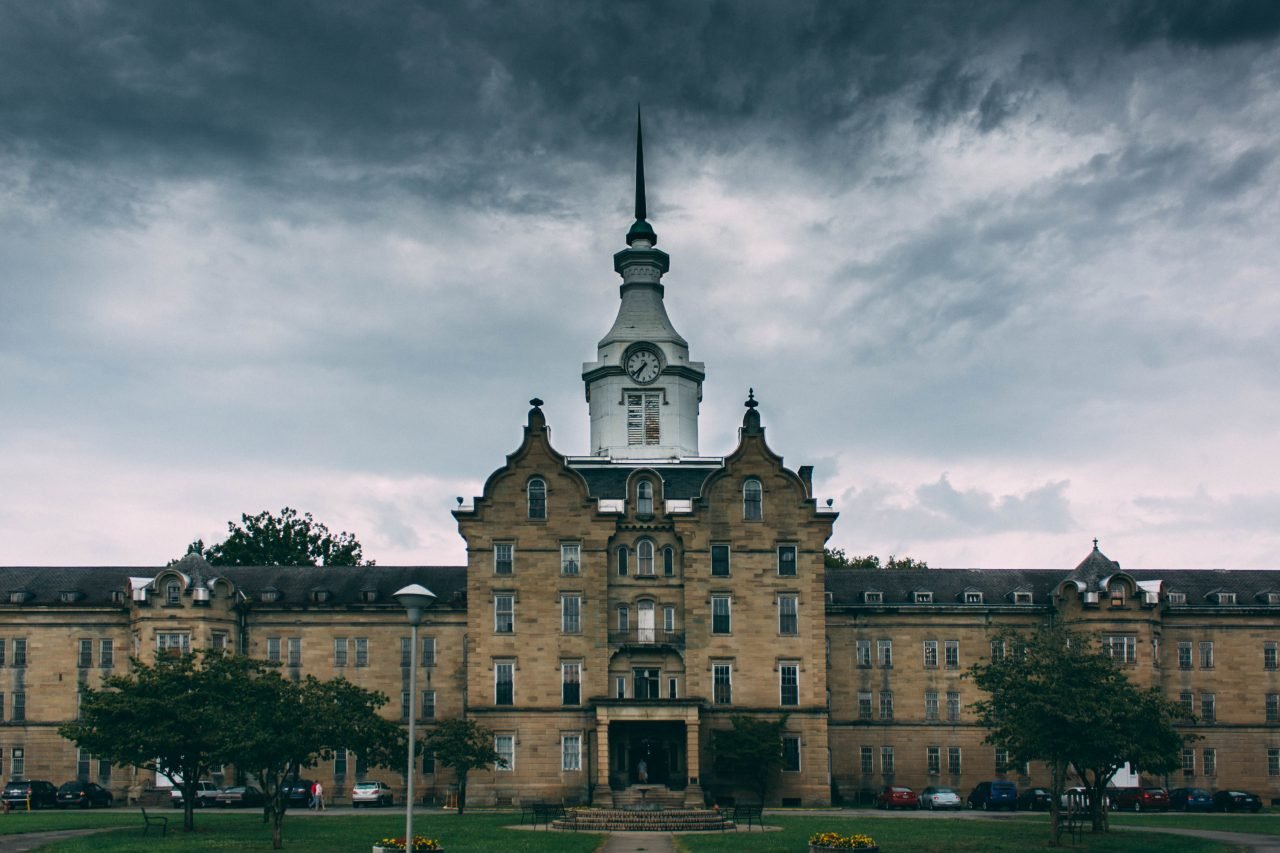 In Weston, West Virginia, you can find the Weston State Hospital. Many of you will know it better as the Trans-Allegheny Lunatic Asylum. The infamous Kirkbride Method was introduced here, as it was in many asylums back in the days. And even though the method looked really good on paper, it didn’t work out well for the patients…

The history of the Trans-Allegheny Lunatic Asylum

The Trans-Allegheny Lunatic Asylum‘s construction already started in 1858, but because of the American Civil War the opening was delayed until 1864. The first person to be admitted to the lunatic asylum was a female housekeeper because of domestic violence. The reasons to be admitted in an asylum were quite remarkable. If you’re interested you can find a list here. Men and women were housed in separate departments. In 1873, a wing for colored people was opened.

Architect Richard Andrews created a beautiful building with lots of windows. Light and fresh air were believed to be the best cure for mental illness. The Trans-Allegheny Lunatic Asylum is built on a huge piece of land including a forest for exercise and fresh air. This had everything to do with the Kirkbride Method. The lunatic asylum was self-sufficient: it had a water treatment plant, a working farm and even a private cemetery. In 1913, it was renamed “Weston State Hospital”.

Psychiatrist Dr. Thomas Story Kirkbride invented the Kirkbride Method. His method was used in many mental hospitals, like for instance in The Ridges. He wanted to create large open spaces with lots of sunlight and fresh air. Things concerning the “big city” were avoided as much as possible because this would have a negative effect on the patients. According to Kirkbride, mental illness was caused by the sinful things in the city. In a way he was right, because many patients at the Trans-Allegheny Lunatic Asylum had drug related problems.

Kirkbride’s ideas sounded really good, but in real life they weren’t. For years, family members were discouraged from contacting their mentally ill relatives. They were told never to open letters the patients had sent them. This resulted in total isolation of the patients. But that was not all. The asylum was originally built to house a maximum of 250 patients, but around 1950 the number of patients was 2,600!

All Kirkbride wanted was a safe home for the patients, but after a century of overcrowding, insufficient funding and poor supervision, the Trans-Allegheny Lunatic Asylum fell into decline. The sanitation was bad and the lighting and heating were even worse. One wing needed to be renovated in 1935 because a patient set it on fire. This wing was reasonably luxurious, but the rest of the building remained in a very poor state.

Back in the days, little was known about mental illness. For instance, children with Down syndrome were housed in asylums simply because they were different. But, people suffering from epilepsy and diabetes were also admitted. There even was a closed department for disabled veterans from the American Civil War, simply because no one knew what else to do with them. And of course people with problems involving drugs, drinking and other ‘annoying habits’ were locked away in asylums such as the Trans-Allegheny Lunatic Asylum.

It’s not hard to imagine that the frustration among the patients was huge. Some patients became violent to other patients. These aggressive patients were literally locked away. Some were even chained to the wall. In the 80’s, a new lunatic asylum was opened. Here, a new method was introduced. The violent patients however, remained at the Trans-Allegheny Lunatic Asylum. The asylum gradually transformed into a prison in 1986, rather than remaining a mental hospital. Eventually, the building fell into decline so severely, it was shut down in 1994.

Many plans were made for the building. Project developers wanted to turn the former asylum into a hotel and spa, a new hospital etcetera. But, nothing ever came of these plans. In 1999, the interior on all four floors was completely ruined when a police force came to paintball for the night. Three of them lost their jobs because of this.

In the year 2000, a museum about the American Civil War was opened inside the building, but it was closed shortly after because of a fire hazard. In 2007, the former asylum was bought by a businessman named Joe Jordan for 1,5 million dollars. He immediately started removing the building’s asbestosis: his area of expertise. Renovating the entire building will cost a fortune! That’s why his daughter Rebecca Jordan Gleason has thought of a plan to make money. She organises concerts, meetings, dinner shows, and historic tours. And ghost tours, because the building is extremely haunted.

The ghosts of the Trans-Allegheny Lunatic Asylum

Even though the number of paranormal reports at the Trans-Allegheny Lunatic Asylum are less than at Waverly Hills, it’s still very haunted. Joe Jordan’s daughter herself has had a scary encounter with the asylum’s ghosts. One night, 40 of the in total 906 doors slammed shut at once while she was the only person in the building. A little boy has been seen in the corner of a certain room by many. Strange noises are heard throughout the entire building and people often feel as if they are being watched or ‘not alone’. About 25,000 people attend a ghost tour each year,

Exactly how many people have died within the asylum’s walls is unclear. Only a few of the headstones in the cemetery have names on them. Most people only got a numbered brick. The Trans-Allegheny Lunatic Asylum has been a home to many people. One man even spent 60 years of his life in the facility. He was in tears when he found out the building had to be closed. The poor man didn’t want to leave his home. He died a couple of weeks after he was relocated.

Today, the former asylum is still owned by Joe Jordan and his daughter Rebecca is still the manager. Both historic and ghost tours are offered. The money made from these tours is used to restore the Trans-Allegheny Lunatic Asylum back to what it looked like.