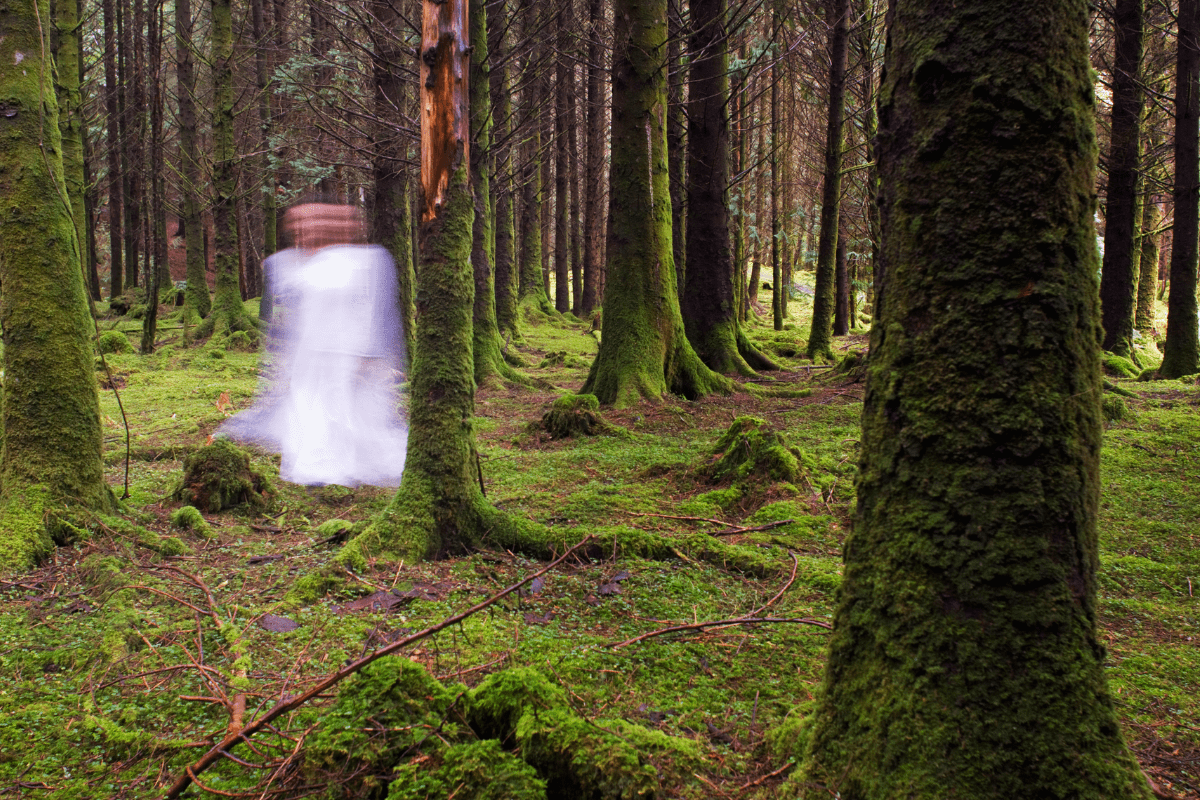 Top 9 women spirits in all kinds of colors

Spirits of women are often referred to in colors. The colors of their dresses, that is. There are Ladies in White, Women in Black and numerous Grey Ladies. But did you know there have been sightings of women in other colors as well? Let’s take a look at the variety of colors AND the places that these women haunt.

There are many reports of Grey Ladies and Women dressed in Grey. These sightings may have to do with the color of the dress the women wore or perhaps grey is a common color in the paranormal world. Anyway, we have a few Grey Ladies mentioned in our stories. Like the Lady in Grey of the Willard Library. She is believed to be the daughter of the founder of the library. Borgvattnet, the haunted vicarage in Sweden, also has its own Grey Lady and The Tower of London is haunted by a veiled Grey Lady. The chapel of Glamis Castle is haunted by a Grey Lady who is believed to be the ghost of poor Lady Janet Douglas. Janet Douglas was accused and found guilty of witchcraft. She was later burned at the stake. The family even has a chair reserved in the chapel for her.

Dock Street Theatre is also haunted by a White Lady. Not much is known about her, but she appears to be friendly. The mysterious Bolling Hall is also haunted by a Woman in White as well as the former prison Shepton Mallet. This Woman in White was sentenced to death for killing her fiancé. On the night before her execution, she wanted to sleep in her wedding dress. The next morning she was found dead. She probably died of a broken heart.

Number 3: The Woman in Black

Ever read “The Woman in Black” by Susan Hill? Now that’s a classic ghost story! I loved it! But, there are many more Women of Black-sightings in the world. A visitor of the Tower of London saw a woman in a black velvet dress once. When she visited The Tower again years later, she saw her again! Borgvattnet Vicarage is haunted by three old ladies: one in a grey dress, one in a purple dress and one in a black dress who appears to be mourning. Mantelgeisten, the cloaked female ghost that haunts Akershus Castle should also be named here. She is just one of the many ghosts of this Norwegian castle, but she is a scary one. She has no face.

Lady spirits have appeared in blue colors, as well! Port Arthur is haunted by many ghosts, but one of them is a lady dressed in a pale greyish or blueish dress. She is believed to be the spirit of a young woman who died during childbirth. The Story Inn in Nashville, Indiana, is haunted by a Blue Lady. She is believed to have been the wife of Dr. George Story, who founded the town. There are hundreds of documented encounters with the Blue Lady. But, she is not referred to this color for her dress, but for her hypnotic blue eyes. McPike Mansion is haunted by a lady in a blue dress. She has been seen coming down the stairs. She arrived in the middle of a tour so many people saw her!

France has her very own Green Lady. She is haunting Château de Brissac, and is believed to be the ghost of Charlotte de Brézé. Charlotte had an affair and was caught red handed by her husband who then murdered both her and her lover. Her lover’s ghost left the castle earlier, but Charlotte still remains. Her terrifying spirit loves scaring visitors, but the family who still lives in the castle has gotten used to her appearance. La Dame Verte has no face: just two empty eye sockets that stare directly at you.

Red is often seen as a dangerous color. Well, that certainly goes for the Red Lady that haunts Leap Castle. The Irish castle is haunted by many ghosts, but she is a scary one! She has been seen by several people. She haunts the entire castle but has been seen most frequently in the Blue Room, which used to be a nursery. She’s tall, lean, has long brown hair and always holds a dagger, ready to strike. It is believed she was an involuntairy guest of the O’Carroll clan. She most likely got pregnant and the O’Carroll’s either killed the child or she was killed while she tried to escape.

Pluckley, again, is also haunted by a Red Lady. She haunts the church cemetery. The Red Lady appears to be looking for her stillborn baby who was laid to rest in an unmarked grave. She can’t find her baby. And Dock Street Theatre is haunted by a lady in a red dress who was struck by lightning on one of the balconies.

Raynham Hall is haunted by a Brown Lady. She is believed to be the spirit of Lady Dorothy Walpole. Lady Dorothy was the second wife of Charles Townshend. Somehow he caught his wife cheating with Lord Wharton, a man with a reputation. Townshend was furious with his wife and locked her up in her chambers. Lady Dorothy stayed here many years until her death in 1726. Later, it became clear the poor woman was set up! Perhaps that’s why her spirit still haunts Raynham Hall. She has been photographed and is now known as the Brown Lady.

The Rio Grande Depot is a historic train depot in Utah which dates back to 1910. There have been many claims of sightings of a Purple ghost who is now known as the Purple Lady. She is believed to be a woman who was killed on the tracks. The story goes that she and her fiancé were having an argument and at some point her engagement ring was thrown down onto the tracks. The woman, clearly in tears and distraught, climbed onto the rails to get her ring back. She was hit by a train and instantly killed. The Purple Lady has been seen around the station: on the tracks, the platform, the café and the restrooms. People have also heard her singing and some claim to have heard her footsteps.

Number 9: The Woman in Beige of the Virginian Hotel

The Virginian Hotel was opened in 1911 and constructed by a man named August Grimm. Thehotel was much too big and too luxurious: it was kind of out of place. Today, it’s a famous historic landmark, but it’s also haunted. The Virginian Hotel is haunted by a female ghost. This Woman in Beige is still waiting for her husband to return. He was supposed to arrive by train, but he never returned. The story goes that the Woman in Beige threw herself out of a third-floor window and fell to her death. She has been seen many times.

Do you want to read more stories about haunted places in the world? Click here!