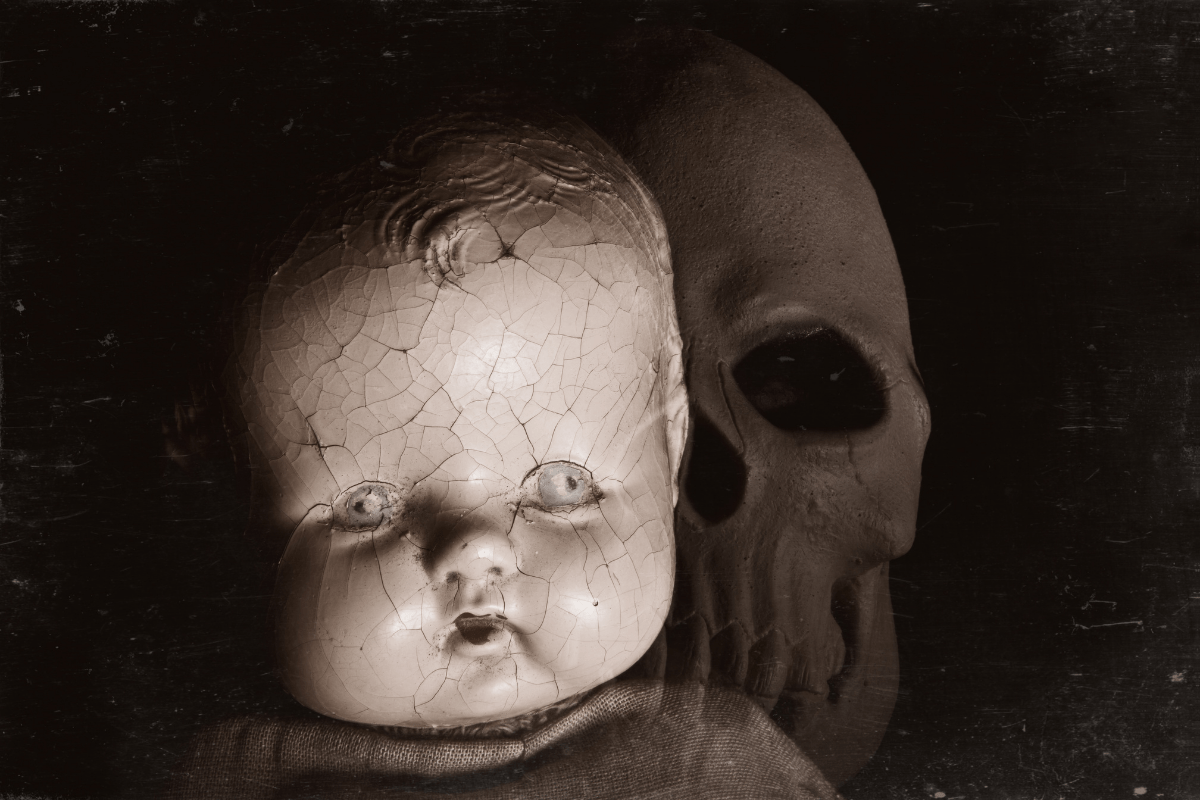 Not only houses and old castles can be haunted. Objects can be haunted, too. Like dolls. I never really liked dolls, not even when I was a little girl. I would never buy an antique porcelain doll, but there’s a serious market for them out there. Lots of haunted dolls are sold on sites such as Ebay. Some of which are named in this blog. Would you buy a haunted doll?

Doll Annabelle is perhaps the most famous haunted doll in the world. She is a so-called Raggedy Ann doll. These dolls were very popular in the 70’s. The Annabelle doll seen in the Conjuring movies is very different from the real Annabelle, but that doesn’t mean she’s less creepy. This doll is inhabited by a demon who wants to possess Annabelle’s owners. Do you want to read Annabelle’s story? You’ll find it here!

Another famous haunted doll is Robert, an antique doll dressed in a sailor suit with a teddy bear. Robert’s supernatural abilities were most likely triggered by Gene Otto, the boy who owned him. He would constantly blame the doll for all his mischief. Robert is known to move, his facial expressions tend to change and he’s been connected to several accidents, both small as big. Read Robert’s story here.

Letta, the bringer of good luck

Kerry Walton returned to Australia in 1972 to bury his deceased mother. Under the floorboards of her veranda he discovered a 200-year-old marionette doll! He completely fell in love with the doll. Later, he found out the doll had been made by a Gypsy who lost his son by drowning. Gypsy’s believe the soul of a loved one will inhabit a doll which was made for them. This is what happened to this marionette. The doll has real hair and under its skull you’ll find something which perfectly resembles a human brain.

Kerry named the doll Letta, or Ledda, because of the fact he sometimes screams “Letta me out!” Letta is a very friendly doll and he’s the bringer of good fortune. Dogs tend to dislike the doll, they freak out when he’s near. Some people claim to feel sadness and a sudden feeling of fear when they are around him. Letta can move by himself and he’s got a pulse.

Harold, the evil one

Baby doll Harold seems like a harmless doll, but he’s pure evil. Harold has had many owners in the past and is found on Ebay pretty regularly. Someone even follows the doll’s every ‘move’ and created Harold’s very own website and he’s got his own Facebook page. Everyone who adopts Harold will experience strange things. He moves by himself, he talks and his facial expressions change daily. He causes extreme headaches, migraines and back pains. Owners sometimes get hurt without an identifiable cause. Harold has been connected to two mysterious deaths. Would you like to be Harold’s new mum or dad?

Doll Joliet has been in a family for four generations and passes on from daughter to daughter. But, so far, it is a curse to inheret her. Joliet now belongs to a woman named Anna. Anna’s great-grandmother received the doll from a vengeful ex when she was pregnant. When the child, a boy, was born, all seemed well. But, three days later the boy died. The cause of death was never determined. The baby girl who was born later did survive.

She inherited the doll and had a daughter and a son. And again, the son died three days after being born without a reason. And this is the way it goes for generations. At night, creepy sounds like crying and laughter are heard in the room where Joliet is. The crying seems to come from different babies. According to the family, the crying is caused by the dead baby boys.

Doll Mandy drove her family so nuts they decided to donate her to the Quesnel Museum in British Columbia. She has been here since 1991 and it’s over a hundred years old. Mandy cried for nights on end and even opened windows by herself. The terror has ended for the family who owned her, but she’s now a hand-full for the museum staff. Lunches disappear and reappear in different locations of the museum. The same goes for pencils, papers and other office supplies. She terrifies people with her tiny footsteps which are crealy heard after the museum closes. She likes to go for walks. The museum has had difficulties putting Mandy on display. She can’t be placed with other dolls because she simply destroys them. Visitors claim she winks at them and if you want to take her picture you are bound to have a ruined camera. 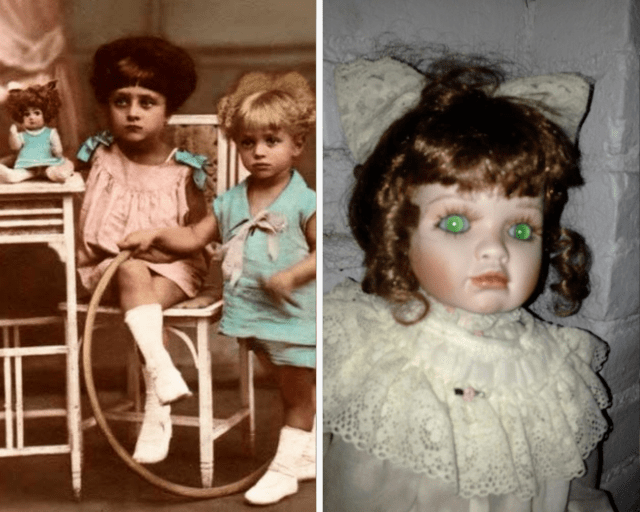 Pupa, meaning “doll” in Latin, is a custom made doll for an Italian girl. Back in the Victorian Era it was normal to have a doll which resembled its owner. The girl even had her hair cut so it could be attached to Pupa. Pupa’s little mother even claimed the doll talked to her, but this was in the child’s imagination. Or wasn’t it? When Pupa’s owner died of old age in 2005, her next of kin placed Pupa inside a glass container. She frequently shifts into another position and her facial expressions change. Small objects that are in the container with her are often re-located and sometimes she even tabs the glass because she wants out of her glass coffin.

Amelia, the doll with the glowing eyes

Amelia is a porcelain doll which was also listed for sale on Ebay. She quickly became the most viewed item on the sales site because of the warning her selling owner had written along with it. She wrote: “Be warned, this doll is not for the faint hearted and certainly does not belong in a nursery”. Her eyes were originally bright blue, but turned fluoriscent green overnight. Why? Nobody knows. Ever since her eyes changed color, strange things started happening around the doll. She moves around for example. Sometimes she’s in the middle of the hallway, she giggles like a girl and sometimes she waves at her new owner.

Isla is an antique baby doll which appeared on Ebay after her previous owner had passed away. She was probably manufactured somewhere in the 19th century. This doll looks innocent, but she has a will of her own. She tends to be extremely dependant on her owner. The previous woman who owned her even ended up in social isolation. Every night she would wake up hearing a thud coming from the room the doll was in.

She would then find Isla on the floor. The woman felt sorry for the baby doll and started talking to her. She even took the doll out for walks in the stroller. When the woman died in her sleep years later, Isla was put in a storage facility. She cried and cried for days in a row. So yes, she ended up on Ebay and she was sold to her current owner. And this woman also admitted she started having motherly feelings towards this doll.

This strange looking doll doesn’t have a name. It’s simply known as the Voodoo Zombie Doll. This doll originally comes from New Orleans (which doesn’t really surprise me). It was sold on Ebay (again) and ended up with a woman. She received a note along with the doll telling her to leave the doll inside its box. Always. But, the woman took it out anyway. She still regrets her decision. Right after he removed the doll from its box it started to appear in her dreams.

It attacked her several times as well. She tried to get rid of it by selling it on Ebay again. Many were interested, but the new owners only seemed to receive an empty box. The Voodoo doll would appear right back on the woman’s doorstep. The Voodoo Zombie Doll is currently owned by a self-proclaimed ghost-hunter. He thinks he can put a stop to the evil Voodoo Doll by destroying it. Do you think he can do it?

Interested in buying a haunted doll yourself? Check out Ebay! We are looking forward to hearing your experiences!