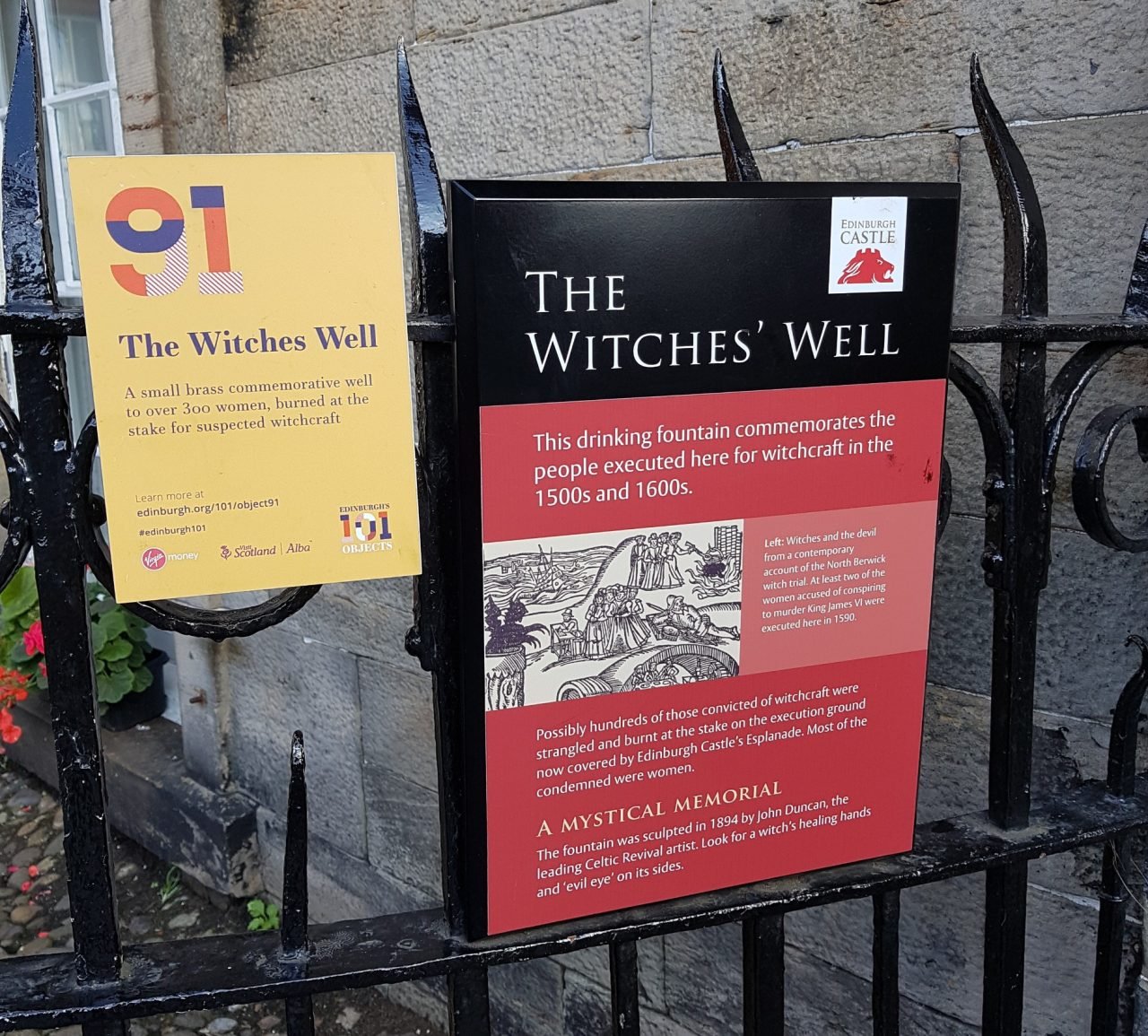 In Edinburgh, just outside Edinburgh Castle, you’ll find a small drinking fountain. It is attached to a wall at the lower end of the Castle Esplanade. This fountain, named the Witche’s Well, is a monument to honor the accused witches who were burned at the stake in the city, not far from the monument. You’ll have to know where to look, but it’s worth it.

The history of the Witch Hunt in Scotland

The hunt for witches in Scotland already started around 1479, but increased enormously when James VI of Scotland became obsessed with the occult. The son of Mary, Queen of Scots and Lord Darnley, married Anne of Denmark and Norway in 1590. The Danish court was extremely concerned with witchcraft and black magic. During his time there, James was fascinated by the trials and executions and became convinced Scotland needed such a system, as well. When James and Anne made the journey from Scandinavia to Scotland, their ship alomost sunk due to heavy storms. James thought this might have been the work of witches.

Back in Scandinavia, six women were imprisoned and accused of tempering with storms. The women were tortured and eventually confessed to the crime. They claimed they wanted to keep Anne in Scandinavia and they were burned at the stake. Following this event, James installed a tribunal in Scotland and the with hunt was a fact. Many men and women lost their lives because of this.

The Monument is not far from where the accused were burned and killed. It’s easy to miss the monument because it’s a bit small and tucked away. Most people are focused on Edinburgh Castle, so you really must know where to look. The Witches’ Well was commissioned by Sir Patrick Geddes in 1894 and designed by his friend and srtist John Duncan. The bronze relief features a so-called foxglove plant. Also, the heads of Hygeia, Goddess of good health and her father Aesculpius, God of medicine are shown. Hygeia has a snake curled around her. The Roman numerals 1479 and 1722 are also featured on the plaque. In that period most witches were persecuted and executed.

The inscription of the plaque

In 1912, a bronze plague was placed above the fountain. It says:

This fountain, erected by John Duncan, R.S.A., is near the site on which many witches were burned at the stake. The wicked head and serene head signify that some used their exceptional knowledge for evil purposes while others were misunderstood and wished their kind nothing but good. The serpent has the dual significance of evil and wisdom. The foxglove spray further emphasizes the dual purpose of many common objects.

There are plans for a newer monument to honor the witches. That is a good thing, but I do hope the old one can also remain. If you ever visit Edinburgh, don’t forget to pay your respects.