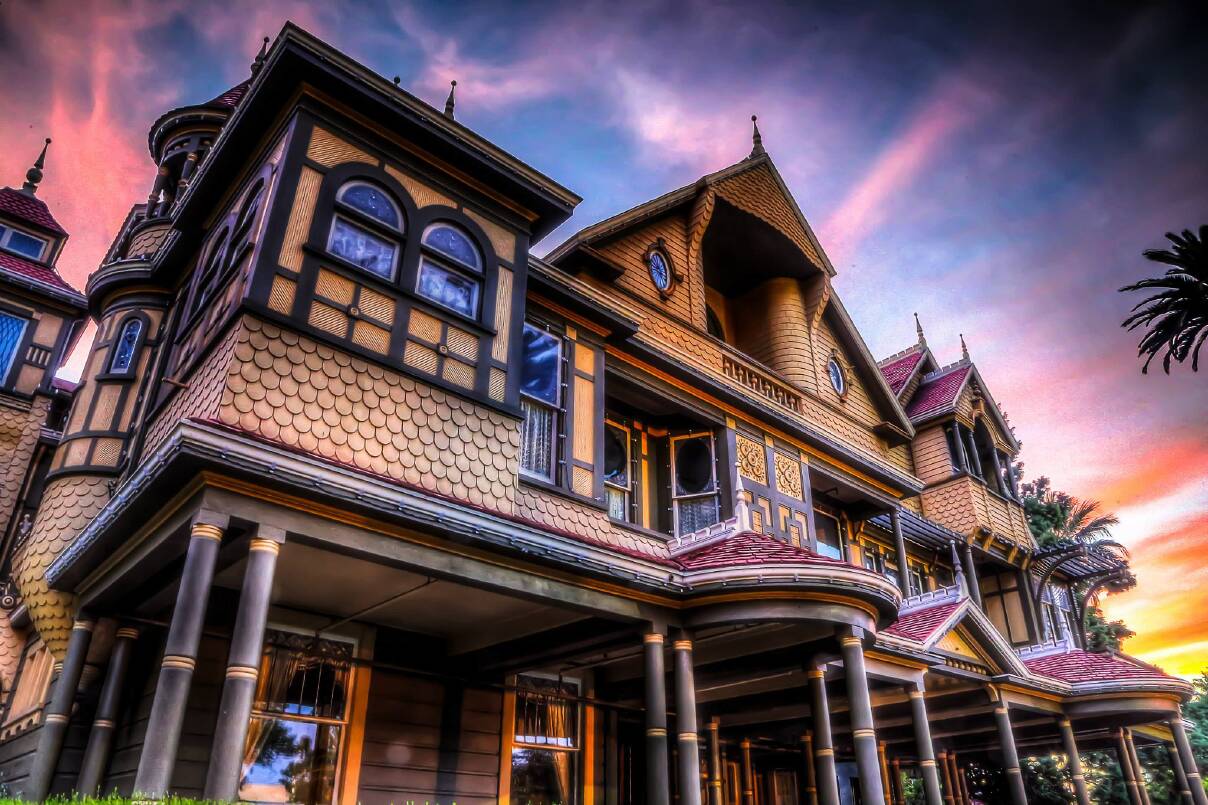 In the Californian city San José you’ll find an enormous Villa which once belonged to Sarah Winchester. Sarah was the widow of the weapon magnate William Wirt Winchester. This 160 room villa has permanently been under construction for 38 years, not because it wasn’t finished, but to mislead the ghosts that were after The Winchesters.

The history of the Winchester Mystery House

When William Winchester died in 1881, he left his wife Sarah a huge heritage. Sarah not only inherited the $ 20,5 million dollars of her husband, she also inherited 50% of his company, the Winchester Repeating Arms Company. That actually earned her $ 2,000 dollars a day, but she didn’t keep that money to herself. That money was for the ghosts. Sarah was convinced that she was haunted by all the victims her husbands rifles had made.

A medium told her that she had to move West and built a home for the spirits there. The construction was to be never ending and it was never to be finished. Otherwise the ghosts would never leave Sarah alone. Sarah decided to follow this advice and she bought an old, dilapidated farm in the Santa Clara Valley where she started building her home.

The Winchester Mystery House itself

Funny fact: there was never an architect involved during the construction of the house. There also is hardly any structure in the 160 room late-Victorian house. Even though the construction of the house started in 1884, it is fully equipped. There is indoor plumbing, something which was rare in that period. There was running water and even central heating. Three elevators are also built inside the house, because Sarah had trouble walking when she got older. Some stairs are extra short because she was only able to lift her feet a couple of inches.

From the 160 rooms, 40 are bedrooms, there are two ballrooms (one of which is unfinished), 47 fireplaces, 17 chimneys, two basements and 10.000 windows of which many have stained Tiffany glass. The floors are made of wood, inlaid by hands and all rooms have golden and silver chandeliers. One funny element of the house is a cupboard, which provides access to at least 30 rooms.

The house was never to be finished

Once, the building was 7 stories high, but an earthquake in 1906 caused part of it to collapse. Because the ghosts had told the medium the house was never to be finished, the upper stairs were boarded up and never repaired. Because the construction “floats”, the damage to the other floors was limited. Such a modern piece of construction work!

That Sarah was a bit nuts, is clearly seen in the construction of the house. Some stairs lead to nowhere, there are doors that open to a blind wall, and there’s even a door on the second floor that leads to the outside. So be careful when you open one! Some windows simply look out at other windows. The house is one big labyrinth. No-one knows exactly how many rooms the house has, because everybody keeps losing track. It’s impossible to map the place. Sarah believed the house fooled the ghosts as well. To confuse them even more, she slept in different bedrooms every night. After the earthquake she was locked inside her bedroom for hours, simply because her staff couldn’t find her.

Sarah wasn’t always this crazy. She was an upper class and well-respected woman. When she married William in 1862, he inherited his parents’ company. The Winchester Rifles could continue loading and were used by the Union (the Northern) soldiers. With these rifles, they defeated the Confederate (the Southern) soldiers during the American Civil War. They had to work with rifles that were less fast. Business went well and the Winchesters got rich. From 1866, things were going downhill.

Annie, their daughter, died very young and William himself died 15 years later. Sarah, who couldn’t cope with her daughter’s loss, got really depressed after losing William, too. So, she met with the medium who told her about the vengeful ghosts. Sarah was very afraid of the ghosts and did everything she could to keep them happy. She held a seance every night in which the ghosts would tell her what had to be constructed the next day.

Sarah died in her sleep September 5th, 1922. When she died, construction stopped immediately. Her possessions were divided under her cousin and personal secretary. The house itself was never mentioned in her will. The house was seen as worthless because it was unfinished, damaged by the earthquake and extremely weird. A local investor bought it for $ 135.000 dollars. Eventually it was sold to John and Mayme Brown who opened the house to the public. Today, it belongs to the Winchester Investment LCC, a heritage of John and Mayme Brown. The house is still open to the public on a daily basis and several tours are available. Every Friday the 13th and at Halloween there are nightly “flashlight tours”. These are not for the faint hearted. Would you visit it when the pandamic is over?

Do you want to read about other haunted places in America? Click here!