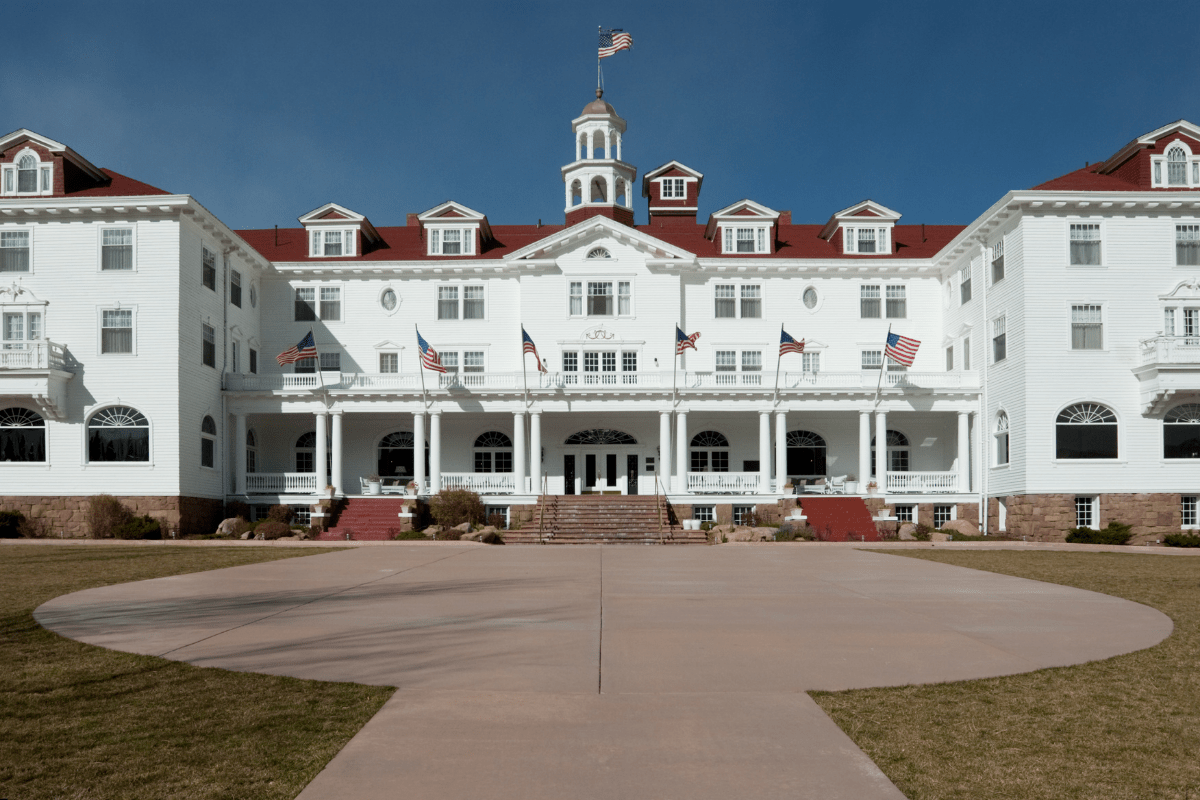 The Stanley Hotel is a 140-room hotel in Estes Park, Colorado. It gives you a breathtaking view on Rocky Mountain National Park so it’s much loved with tourists who visit the area. But this is not the only thing that makes this hotel so special. Stephen King had a frightening paranormal experience at the hotel which inspired him to write not one, but two books about the place!

The history of the Stanley Hotel

Freelan Oscar Stanley was sent to this area by his doctor after he was diagnosed with tuberculosis. He only had six more months to live and the Colorado climate was to relieve him from a lot of agony. So, in 1903, he and his wife Flora went to a holiday house in Estes Park. The Colorado sun actually did far more for Freelan than just that: his health improved dramatically and eventually he was even cured! And both Freelan and Flora fell in love with the area. So, they bought a piece of land and they decided to build their lives there.

The piece of land originally belonged to Lord Dunraven. He was a politician and a count and he owned a hunters cabin as well as a couple of holiday houses there. People had found out that Dunraven was a fraud and he fled the area. Right on that spot, Freelan and his wife built a neoclassical hotel. The construction was finished in 1909. Wood and stone from the Rocky Mountains were used to build the hotel.

A popular place to be in the Summer

The Stanley Hotel was built with running water and electricity, but without heating. That’s why the hotel became a luxurious Summer hotel which was very popular among the rich and famous. Theodore Roosevelt, the emperor and empress of Japan, John Philip Sousa and Titanic-survivor Margaret Brown stayed over in this hotel. Stephen King stayed at the hotel in 1974 for some time while the book he was working on, didn’t really progress. He was intrigued by the mysterious hotel.

One night he had a horrible nightmare about his son who was being chased down the hotel corridors by the hose of a fire distinguisher. This nightmare was actually the inspiration for his book The Shining. In the book he called the hotel “The Overlook”. His book became such a success that it was even filmed. The Stanley Hotel was the actual filming location! The hotel made it to the newspapers because it wanted to expand. To do so, the nearby pet cemetery was supposed to be cleared. Stephen King based another book on this event, named “Pet Cemetery” (1983).

The Stanley Hotel is not only loved because of its location, nor because it’s registered in the National Register of Historical Places, but because it’s insanely haunted! In every room there’s some sort of paranormal energy. Scientists blame this on the geographical location: The Rocky’s are said to strengthen earth rays and other energies. But, through the years, the hotel has had incidents that attract ghosts as well.

Head Housekeeping Elizabeth Wilson lighted a lantern in room 217 during a storm on June 25th 1911. She nearly died by doing this it. A gas leak caused the flame to explode and significant damage was done to the hotel. Elizabeth “only” had two broken ankles, but ever since her death in the 50’s, she still takes care of the guests in room 217. Lights are turned on and off, doors are opened and closed, and even entire suitcases are emptied and the clothes neatly folded in the closet. Elizabeth does have the habit to become a bit jealous. Especially when the room is used for Honeymooners. She makes sure she sleeps between the newlyweds. Stephen King also stayed in this room.

Freelan and Flora must have loved the hotel as if it was their child. They are still there, even though they have died quite a long time ago. Freelan loves to hang around in his favorite area’s: the billiard room and the bar, while Flora loves to entertain the hotel guests with her piano play. Sometimes she’s seen as a complete apparition, sometimes only the piano keys move. The music always stops when someone comes near the piano.

Lord Dunraven never wanted to leave in the first place. Even though he never spent a night in the hotel, he does haunt here. Room 407 is his domain. He also likes playing with the lights and the doors, but if you ask him politely, he won’t bother you during your stay. His face is often seen in front of the window even though nobody’s in the room. He also tends to stand in the corner of the room, just staring at the terrified guests. But all you must do is ask him to leave. Then all is ok.

The fourth floor of the hotel is dominated by ghost children. It’s extremely haunted there. Sometimes, the hotel management gets complaints from guests, saying that there are so many kids running around and giggling down the corridors late at night. But most of the time there aren’t any kids staying at the hotel at all. Room 418 is loaded with child ghosts and according the hotel personnel that room is the most haunted in the entire Stanley Hotel. This is probably also the floor where the nannies used to sleep. Guests are frequently tucked in at night.

The ballroom and the second floor

The kitchen staff is no longer surprised when party sounds are heard in the ballroom, even though nobody’s there. Stephen King also named the ballroom in his book The Shining. Fortunately, there are no evil spirits at The Stanley Hotel. All spirits are happy and nice. Sometimes a trick is being played on somebody, but it’s all very innocent. Personnel clothes are being tucked and the elevators tend to make sounds when they are out of order. On the second floor, a boy can be seen asking for his nanny. Stephen King also saw the little boy, so he had enough inspiration when he went home.

It may not seem attractive to spend a night here, but you have nothing to fear of the hotel ghosts. Please take horror movies like “The Shining” and “Resident Evil” (which was also recorded here) not too seriously. Because, be honest, who could resist that beautiful view!