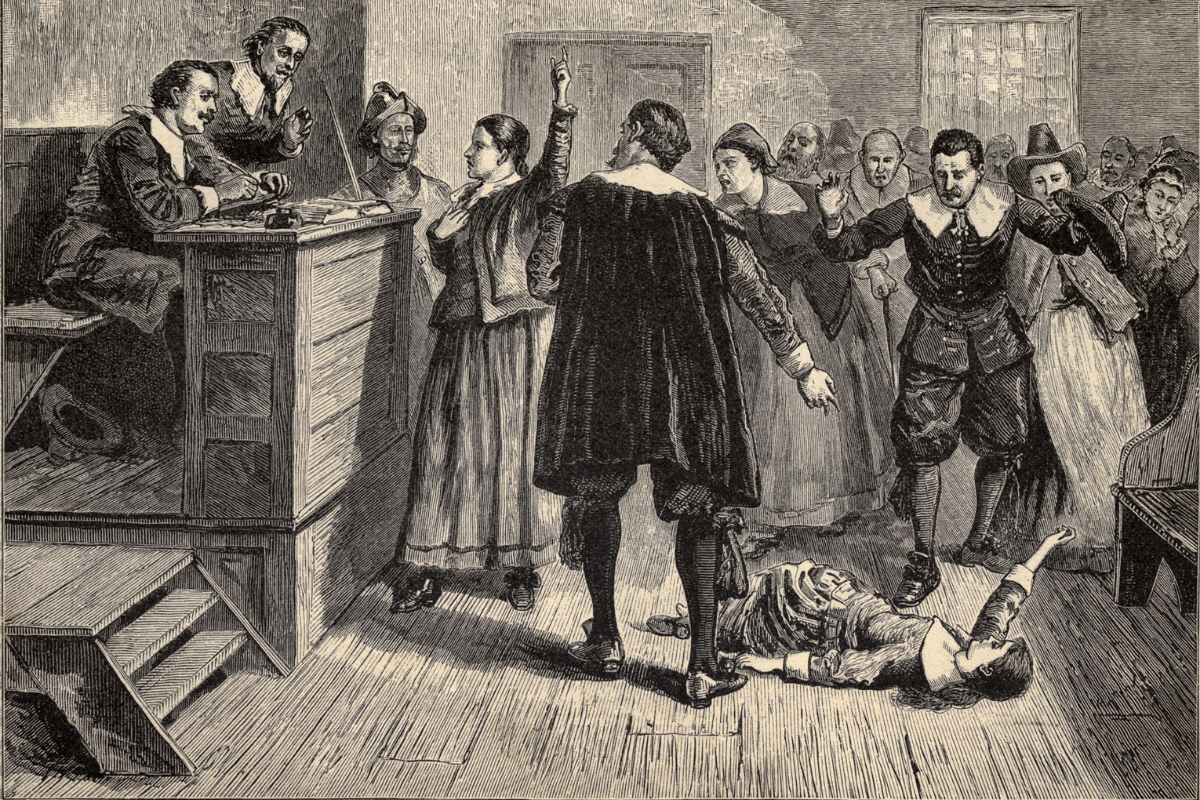 Salem, Massachusetts, is a town with two faces. The harbor-city, where 41.000 people live, has a rich history due to a flourishing trade with the Far East. On the other hand, the city has a dark past. This is where the infamous Salem Witch Trials took place in 1692. Today, it’s not the thriving but the dark past which makes this town so popular.

The history of the Witch Trials

Near the blooming town of Salem, there was the Old Salem Village. This settlement arose because of the European pioneers who settled at the edge of the wilderness. In contrast to the big town, poverty ruled here. There were fights about land and superstition and the fear of the Devil on a daily basis. The strict Puritan faith took away all pleasure for its residents. Life in Salem Village was no fun in 1692, especially not for children.

That’s why the nieces Elizabeth Parrish (aged 9) and Abigail Williams (aged 11) liked to spend time with the Caribbean slave of the local vicar, Tituba Boyer. Tituba loved telling the girls stories about life in Barbados and introduced them into the world of sorcery. Tituba loved the fact the girls were so intrigued and she started giving small demonstrations. Something which cost her her life.

Elizabeth and Abigail knew that what Tituba showed them was completely forbidden when it came to their faith. So they started feeling guilty towards it. The girls also started showing strange behavior. They would sometimes scream for no reason and point into the sky. Elizabeth and Abigail also got sick with fever, compulsions and they started crawling underneath furniture where they remained lying in strange positions. The town’s doctor had no clue what to do with the girls’ strange behavior and symptoms, so he made his own diagnosis.

The girls were clearly the victims of witchcraft. This diagnosis spread through the town like a virus. The girls, on their part, pointed at Tituba to be guilty of their condition. Tituba was soon to be called the Black Witch of Salem. Along with her, two of her neighbors were accused of being a witch: Sarah Good, a pregnant beggar and Sarah Osbourne, a demented old woman. These three women were the first to be accused of witchcraft in Salem, and because they were social outcasts, nobody stood up for them.

After the first “witches” got arrested, the real witch hunt broke loose. In a short time, all prisons of Salem, Boston and all surrounding cities were packed with “witches”. Both women and men were arrested. At the end of May, a special court was erected by governor Sir William Phips, because the trials should take place as soon as possible. He appointed the Theologian William Stoughton as Head of Justice, while this man had no knowledge of Law at all. Meanwhile, Sarah Osbourne and the newborn baby of Sarah Good had already passed away in prison and many were ill.

The trials were held and almost everybody who was jailed was found guilty of witchcraft and sentenced to death. The executions took place between June 10th and September 22nd 1692. Nineteen witches, among them six men, were hanged. Giles Corey, an 80 year old farmer, refused to plead guilty. Torture was an honest way of getting people to tell the truth back in those days, so a plank was placed on his body. This plank was aggravated with heavier and heavier rocks so he was slowly squeezed to death. He died, two days later, still without a confession.

The victims of the witch trials weren’t even given rest after their death. They were excommunicated by the church, so they didn’t have a right of a ceremonial burial. If a corpse was brought down from the gallows, it was simply thrown into a shallow grave. All the victims’ belongings were confiscated by the government.

The end of the witch hunt

In January 1693 the witch hunt came to an end when the “bewitched” girls Elizabeth and Abigail started accusing noble people. Even though the hunt ended, it took until May that year before all prisoners were released. New laws came into effect. In these laws the sentence “all convictions pronounced under the old system have expired and should be forgotten” was included.

Of course, the relatives of the executed and accused, opposed this. Hence petitions were signed in which compensation was demanded. On December 17th 1711 an amount of 578 pounds and 12 shilling was made available to distribute among the then still living relatives. Not until 1954 a law was accepted that plead all of the accused not guilty.

Fungus in the grain

Some “bewitched” victims got ill by eating the bread that was made with contaminated rye flour. When baked, a mycotoxin would be released which caused hallucinations, muscle spasms, fever, dizziness and paralysis. These are exactly the symptoms Elizabeth and Abigail were having. What happened to the girls later is unknown. They were probably not prosecuted for their actions, but these young children had blood on their hands. Much blood.

Right, before I forget: Salem is haunted. There are many pictures in which unexplained smoke and orbs are seen. But Sarah Good and Giles Corey also spoke a curse in their final moments. Sarah Good cursed pastor Noyes right before her execution with the words “God will give you blood to drink”. Years later, Noyes died of a ruptured aorta which filled his lungs and throat with blood. He literally drowned in his own blood.

Giles, who refused to plead guilty, also used his final words wisely. Not only did he curse the sheriff, but also the entire town of Salem. The sheriff died four years later by a cardiac arrest and each time the spirit of the angry Giles Corey is seen, something terrible happens. Like in 1914, when a bog fire nearly destroyed the whole town!