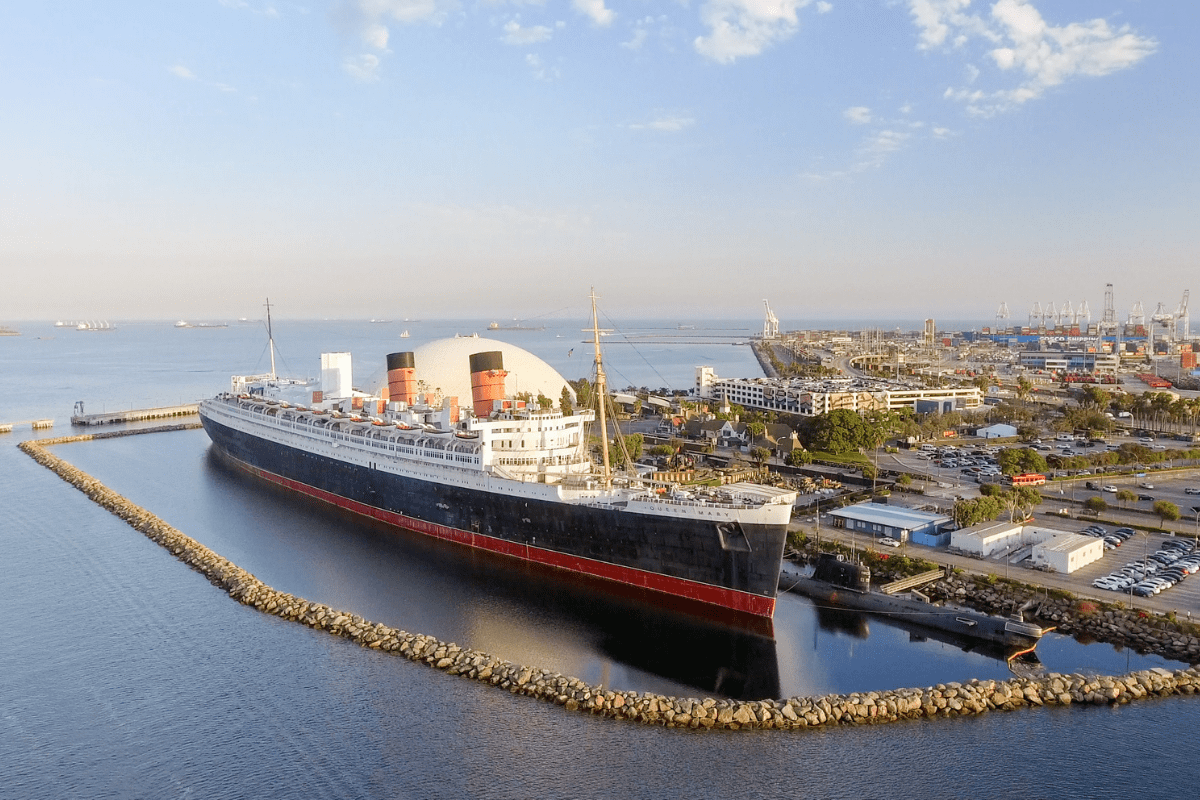 The Royal Mail Ship (RMS) The Queen Mary is a former Trans-Atlantic passenger ship that is currently permanently anchored in Long Beach, California. Today it serves as a museum and a hotel, although it got in financial trouble in 2021 and is currently closed. People who have stayed here overnight might have had a spooky encounter with one of the ship’s ghostly residents.

The history of the RMS Queen Mary

The RMS Queen Mary was ordered on April 3rd 1929 by the Cunard Line Shipping Company. It was launched in 1931 and it had her maiden voyage on May 27th 1936. The Cunard Line Shipping Company also owned the RMS Titanic that was built 20 years prior to this ship. The Queen Mary was built by the Scottish shipbuilding company John Brown & Co and was baptized by Mary Teck, consort of the British King George V. The ship was very fast despite its measurements and won the “Blue Pennant” in 1936 for being the fastest ship of the world.

For a short time, The Queen Mary lost her title to The Normandy, but won it back in 1938. She kept her title until 1952. During the Second World War, The Queen Mary, along with her younger, bigger sister The Queen Elizabeth, was used as a warship. She was painted marine grey and got nicknamed “The Grey Ghost”. All the carpet, furniture, china and crystal was removed from the luxurious ship and replaced for heavy armor. Both ships were so fast they were able to beat the fastest submarines.

On October 2nd 1942 The Queen Mary accidentally sank the HMS Curacao by collision just outside the Irish coast. This much smaller ship was assigned to lead The Queen Mary through hostile territory. The ship broke in two, and 239 of the 338 crew members died. The Queen Mary was ordered not to stop and help in case of a submarine attack. Later, the 99 survivors of the Curacao were taken on board of this ship. In December of that same year, The Queen Mary almost capsized caused by a sudden tidal wave near the Scottish coastline.

A 92 foot (28 m) high wave turned the ship 52 degrees within a blink of an eye. Another 3 degrees and it would have sunk. At that time, the ship had its most men in history on board, namely 16.082 people. How many casualties there were during this incident is unknown.

Because of the many men on board, the temperature could rise unbearably. There wasn’t any air-conditioning back then. Every 7 minutes a soldier would have died on that ship because of the heat. And that for hours on end! The Queen Mary also took prisoners of war on board to have them extradited. The German and Italian prisoners rather committed suicide on board than to be prosecuted. Exactly how many people died on board the RMS Queen Mary is unknown.

From September 1946 to July 1947 the ship was turned into a passenger ship again. It became even more luxurious and more beautiful than it was before the war. But from 1958 it was also possible to cross the Trans-Atlantic by air. Suddenly people didn’t have to travel for days any more but just a couple of hours! Sometimes there was more crew on board than travelers. Besides, the ship was so big it didn’t fit through the Panama Canal. And because there were no outside swimming pools, it could no longer pass as a cruise ship.

In 1965, the shipping company started noticing financial losses and the Queen Mary was taken out of service in 1967. The Queen Elizabeth a year later. The RMS Queen Mary had one last memorable trip on October 31 1967 from Southampton, around Cape Horn, to Long Beach where it permanently anchored on December 9th 1967. The ship had crossed the Trans-Atlantic a thousand times by then and had carried 2.112.000 passengers over 3.792.227 miles (6.102.998 km).

You won’t believe it, but the RMS Queen Mary is haunted. And how! The hotel is in the top 10 most haunted places on earth. At least 130 ghosts are said to haunt the ship. Most have been identified by paranormal investigators. But, besides the real apparitions, there are numerous shadow figures, scents, sounds and other sightings that are harder to identify. So, it might as well be haunted by 600 entities! People who have spent the night on board have had nightmares, have been feeling uneasy and even nauseous.

It’s not uncommon that some unseen force tugs your clothes. Cabin B340 is notorious. It’s so active that it hasn’t been used since 1976. According to the legend, someone was murdered here. What exactly happened here is unknown, but guests have heard knocking sounds while nobody was inside. The bathroom lights spontaneously went on and off at night and the crew once found a full bathtub even though nobody had been in there for over a week.

The Winston Churchill Suite is also very haunted. Muttering voices and sounds of throats being cleared are heard frequently. Also knocking sounds from the next door suite are heard when it’s empty. Also the sharp smell of cigars is smelled here, although smoking is forbidden on the whole ship. Door number 13, one of the doors that can seal off an entire compartment in case of an emergency is pretty active. Two men have been crushed to death by this door. In both cases it wasn’t an accident.

The ship’s most loved ghost is that of Jackie (Jacqueline Torin). She drowned in the second class indoor swimming pool at the age of four or five. When you ask her questions she will answer them as if she was standing next to you. A paranormal investigator once was allowed to talk to her for 17 whole minutes! She knew he had candy in his pockets and she wanted to have it. The investigator told her it was okay for her to call him “uncle”, but she refused to scream “no!” from the top of her lungs. She often cries out for her mother and sometimes she screams as loud as she can.

She is also heard and seen in the presence of Sarah. Sarah is a 7 year old child that also drowned in this pool. She protects Jackie aggressively. She slapped an investigator in the face once when she thought he had asked enough questions. The two girls like singing together. Also, a small boy named Jeremy is seen and heard playing with Jackie a lot. Not much is known about his identity. The swimming pool is no longer used for swimming but as a theatre.

A lot less pleasant ghosts are those of Grumpy and the Yellow Man with the Hat. Grumpy loves growling into someone’s ear. His breath even feels warm! He doesn’t do any harm and he thinks he’s much scarier than he actually is. He can also be found in the pool area where the ghostly children are. Before appearing a strong scent of cigarettes is smelled. People say Grumpy drowned Jackie and Sarah, but there’s no evidence in that.

The Yellow Man with the Hat

The Yellow Man with the Hat is a very unpleasant figure that roams the hallways. He does not do any harm, but he’s creepy as hell. He’s very tall and has a yellowish color. He wears a mobster hat, you know, such a hat with a slit on it. His eyes are yellow and his teeth are rotten. He likes to scare the living daylights out of people with his grin. He tends to walk by you, turn around, and give you a smile. Yikes!

A neatly clothed gentleman is often seen at the bar. He’s trying to get the crew’s attention by clearing his throat. When he’s noted, he disappears. In the ballroom, a “white lady” is often seen. She loves to dance and wears a white evening dress. The white lady must have been very young and pretty when she died. She usually stays close to the piano, but is seen in the hallways as well. The white lady confidently walks up to you and when she’s in the stairway area she trips and disappears. She probably died falling down the stairs.

A neatly clothed gentleman is often seen at the bar. He’s trying to get the crew’s attention by clearing his throat. When he’s noted, he disappears. In the ballroom, a “white lady” is often seen. She loves to dance and wears a white evening dress. The white lady must have been very young and pretty when she died. She usually stays close to the piano, but is seen in the hallways as well. The white lady confidently walks up to you and when she’s in the stairway area she trips and disappears. She probably died falling down the stairs. At least 49 passengers and crew members died when The Queen Mary sailed as a passenger ship. Many of them never left.

WWII left its traces behind on the ship. A young sailor who accidentally died in the engine room still haunts the place. The marketing department is haunted by a dark shadow figure. He often appears in the corner of people’s eyes. When they turn their heads to take a better look, he vanishes. The spirits of the dead crew members of the HMS Curaçao haunt the ship that collided with theirs. Some people claim to feel as if the ship just had a  collision. After the thud they hear screams and wild splashing of water. Two ghostly soldiers haunt the swimming pool area. They have been seen talking to each other and they are known to straighten guests’ clothes if they think they look sloppy.

The RMS Queen Mary has been converted into a hotel and you could have visited the ship before the Corona crisis. It closed in March 2020 due to the Covid-19 pandemic, and to make things even worse, the Eagle Hospitality Trust filed a motion in federal bankruptcy court on 9 March 2021 to auction off its lease. Let’s hope it’ll get settled soon so people can visit the place again!