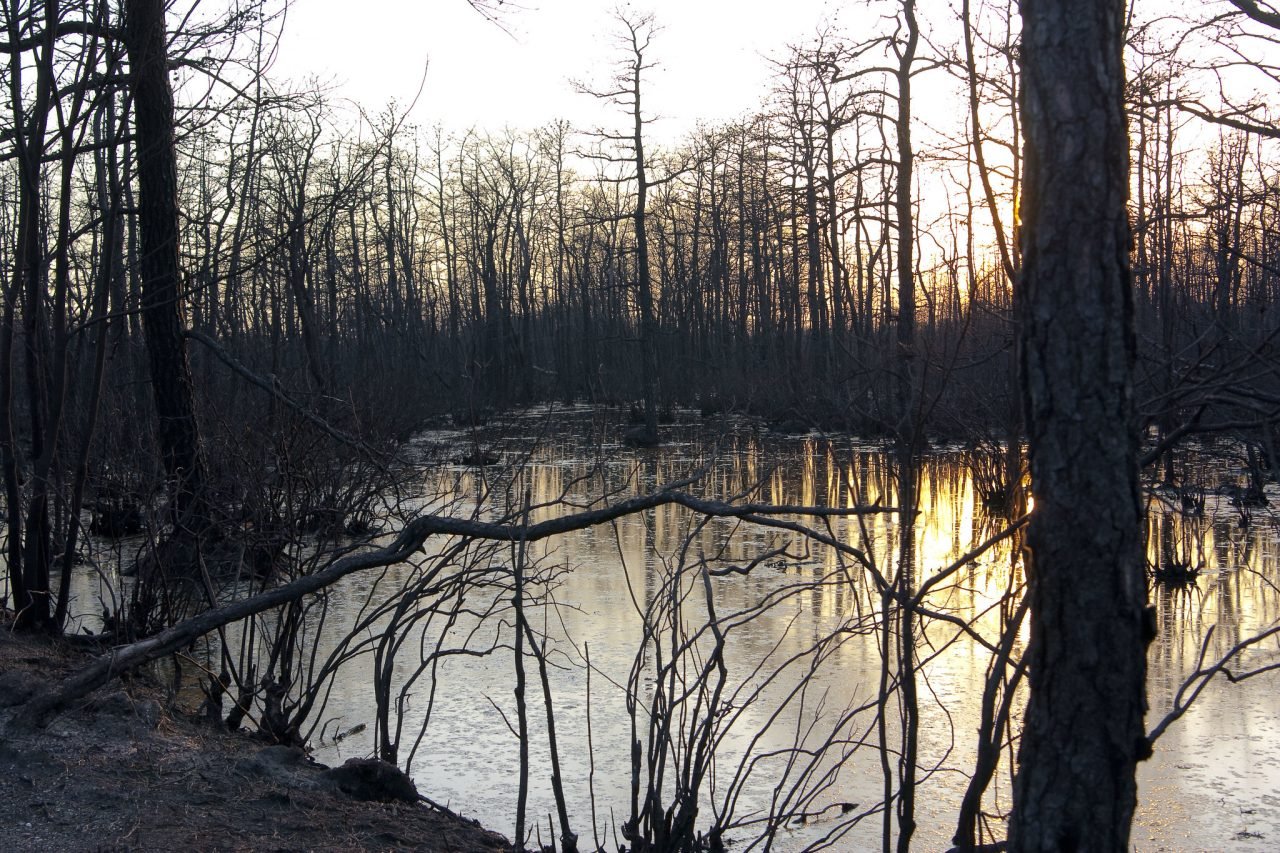 Pine Barrens is a huge woodland which covers a large part of New Jersey. It is situated between the two large cities New York and Philadelphia. The sandy, acidic, nutrient-poor soil has created an unique ecosystem. This is why Pine Barrens is so important and well-known. But, this is not the only thing it’s famous for: the legendary Jersey Devil calls it home.

The history of Pine Barrens

Pine Barrens, or The Pinelands or simply The Pines, covers 1,1 million acres (4,500 km2) of woodland. This is 22% of New Jersey’s land area. The Pine Barrens were formed in the Tertiary Era, over 2,6 million years ago. It’s notable for the population of rare pygmy pitch pines and other plant species that depend on the frequent forest fires that renew large parts of the area each year. The fires are a common occurence here, even long before humans lived here.

Before the first European settlers (mainly Swedish and Dutch) settled here in the 17th century, the land belonged to the Lenni Lenape Indians (since 1200 AD). Pine Barrens wasn’t very attractive to settle in the beginning for the soil is poor so aggiculture was out of the question, but soon charcoal (1740) was discovered and the first iron furnace was built in 1765. The sand was perfect for making glass, cranberry farming and lumber.

Pine Barrens was the location of various industries during the colonial era. The Dutch and Swedish settlers developed whaling and fishing settlements along the Delaware River, but most industries were developed after the Dutch abandoned their claim to the English in 1664. The English used the trees in the area (cedar, oak and pitch trees) for their shipbuilding operations in 1688. Iron coming from the Pine Barrens was supplied to the American Military. Weapons and camp tools were developed during the American Revolution, the War of 1812 and the Second Barbary War. This last war was a war between the US and Algeria in 1815. When coal was discovered in Pennsylvania, many residents headed west, leaving their home behind. But, not everyone left.

After many left the Pine Barrens, those who stayed behind were rural, backwoods families. For years, these people have been called “Piney’s” by outsiders, which was considered to be a derogatory term. Today, many Pineland residents are proud of both the name and the land.

Preservation of the Pine Barrens

Despite being surrounded by big cities, the Pine Barrens remained largely untouched because of its sandy soil. At some point, plans were made to construct a jetport in the area. The land was cheap and there is a limited amount of fog there. But, Congress put a stop to those plans. They appointed the area the New Jersey Pinelands National Reserve in 1978. This enables the area to remain the way it is and makes it attractive for recreation. But is it that attractive?

An area so big and mysterious is bound to have a legend or two. And it has. The best-known legend of the Pine Barrens is that of the Jersey Devil. This monster has a horse-like head, hooves, wings, fierce claws and a forked tail. The creature was blamed for livestock killings between the 1840’s and 1920’s. The Jersey Devil is said to have been the 13th child of a local woman named Mrs. Leeds in 1735. It was born in an area known as “Leeds Point”. The child is said to be cursed because of the unlucky number.

Reports of Jersey Devil sightings go back to 1820, when Napoleon’s brother, Joseph Bonaparte, claimed to have seen the creature on his Bordentown estate. But, the most claims were made in 1909. Hundreds of sightings and attacks were reported in Haddon Heights and Camdon. The panic, also caused by newspaper reports, led to widespread hysteria. Schools were even closed for a period. A $ 10,000,-  bounty was put on the creature’s head. It was never found, though.

By 1869, the iron industry had disappeared completely from the Pine Barrens. Entire towns were abandoned and fell into decay. Railroads were reclaimed by nature, giving the area an even more spooky vibe. Towns such as Astion, Batsto Village, the Harrisville and Martha furnaces, the Friendship cranberry farm and the Pasadena or Brooksbrae brick making factory. All these towns and factories have their own stories to tell, but we’ll zoom in to a couple of them, because some of them are haunted.

This diner is said to have the Jersey Devil lurking outside on many occasions. They even sell merch saying “I ate with the Jersey Devil” on it. The Cedar Bridge Tavern is the location of the last battle of the Revolutionary war. This is where John Bacon, a Tory guerrilla was captured by the Continental Army. John Bacon does not haunt the tavern, but John Wildermuth does. He is a former owner of the tavern and he likes to open and close doors.

The White Horse Inn has served many purposes before being abandoned. It was vandalised pretty severely, but eventually it was restored back into its former glory. A police officer patrolling the building by himself before it was restored never sets foot in it again. He claimed to have heard footsteps inside without anybody being there. A small child has been heard laughing in here as well, even though there are no children around.

Emilio Carranza was a Mexican aviator who flew around the world for peace. Carranza was about to begin a tour from New York City to Mexico City. During his flights he planned to stop at several American cities. His flight, however, was delayed because of a fierce storm. A commanding Air Force officer messaged him to fly anyway, otherwise Emilio’s manhood was in question. Emilio decided to take the risk, but he crashed in the Pine Barrens and was killed. He only had a flashlight to guide him during the storm. It is said that when you flash your car lights at the memorial, you will hear the plane and see Carranza’s final flashlight signal before he crashed.

Batsto Mansion is the biggest building in Batsto Village and is now listed on New Jersey’s registered list of historic places. It has 32 rooms and is a great example of the village’s flourishing iron industry. It was renovated by a businessman named Joseph Wharton in the 19th century and it’s open to the public today. The house itself was built somewhere around 1785. Some people claim to have seen a figure standing in the highest window even though the mansion was closed.

The favorite place to hang out for the Jersey Devil is a lake called The Blue Hole. It looks like the perfect place for an afternoon swim and picnic, but looks can be deceiving. The sandy shores of the water consist of very fine sugar sand, which could easily change into quicksand. The lake itself is said to be bottomless and occasionally drags unsuspecting swimmers into its depths. This might be caused by an underwater current, but locals say it’s the Jersey Devil. Over the years, people have drowned here.

The ghosts of Pine Barrens

The Jersey Devil is not the only thing haunting the Pine Barrens. There’s the ghost of a blonde woman, a black dog and a little boy that haunts the Atco area. The latter is said to be the victim of a hit-and-run. The boy now haunts Burnt Mill Road, searching for his killer. But, there are other ghosts, too.

The ghost of the White Stag

The White Stag warns travellers when there’s danger up ahead. According to the legend, a group of Quakers who, on a stormy night in 1809, nearly fell into the Batsto River simply because they couldn see it. The White Stag appeared and the Quakers turned around, later discovering they were saved from drowning.

The ghost of James Still

James Still was the brother of William Still, the man who wrote the book “The Underground Railroad”. He was lynched for practicing medicine as a black man, something which was out of the question back in the days. James still helps people who are lost or injured. He’s a very friendly ghost.

The ghost of Captain Kidd

Captain Kidd’s spirit is also a legendary ghost that haunts the Pine Barrens. Even though the pirate was executed in London at Execution Dock by hanging, his headless spirit has been seen at the Barrens. Yes, the man was hanged twice because his neck wouldn’t snap the first time, but he was buried with his neck still attached to his body. The story that he haunts the Pine Barrens is not so far-fetched as it looks like.

A book published in 2016, titled Captain Kidd and the Jersey Devil, was based on historic facts. In this book, the 14-year-old Captain Kidd returns to the Pine Barrens for a dangerous journey to avenge the death of his father. He meets the dangerous and protective local Piney’s who live along the Batsto River. His best friend “Black Dog” (the ghost dog?), a poodle, is kidnapped by the same beast that took and killed his father. Can Captain Kidd defeat the Jersey Devil and save his dog?

The Pine Barrens is perfect for a hike and a boat trip. You can visit several of the ghost towns, the ruined factories and of course the Batsto Mansion. But, beware of the Jersey Devil!

In the Californian city San José you’ll find an enormous Villa which once belonged to Sarah Winchester. Sarah was the widow of the weapon magnate William Wirt Winchester. This 160 room villa has permanently been under construction for 38 years, not because it wasn’t finished, but to mislead the ghosts that were after The Winchesters.   The history of the Winchester […]
Near the Italian town Moncalieri in Turin, you’ll find a small castle with a lot of history. The name of the castle is Castello Della Rotto (or Maniero Della Rotta). Another name for the castle is “The Castle of Fear” (in Italian: Il Castello Della Paura), and it’s rumored to be the most haunted castle […]
In Cleveland, in the American State Ohio, you can find the Hannes Tiedemann House. This imposing mansion is better known as Franklin Castle, because it’s located on Franklin Boulevard. But it’s also known as the most haunted house in Ohio. Why? Because things have happened here that should have never come to light… The history […]
In Scotland, near Milton in West Dunbartonshire, you will find Overtoun House. The house was built between 1859 and 1863 and has served many purposes. But the house is not really what I wanted to talk to you about. It’s the bridge leading towards the house that has been keeping people very busy these past […]