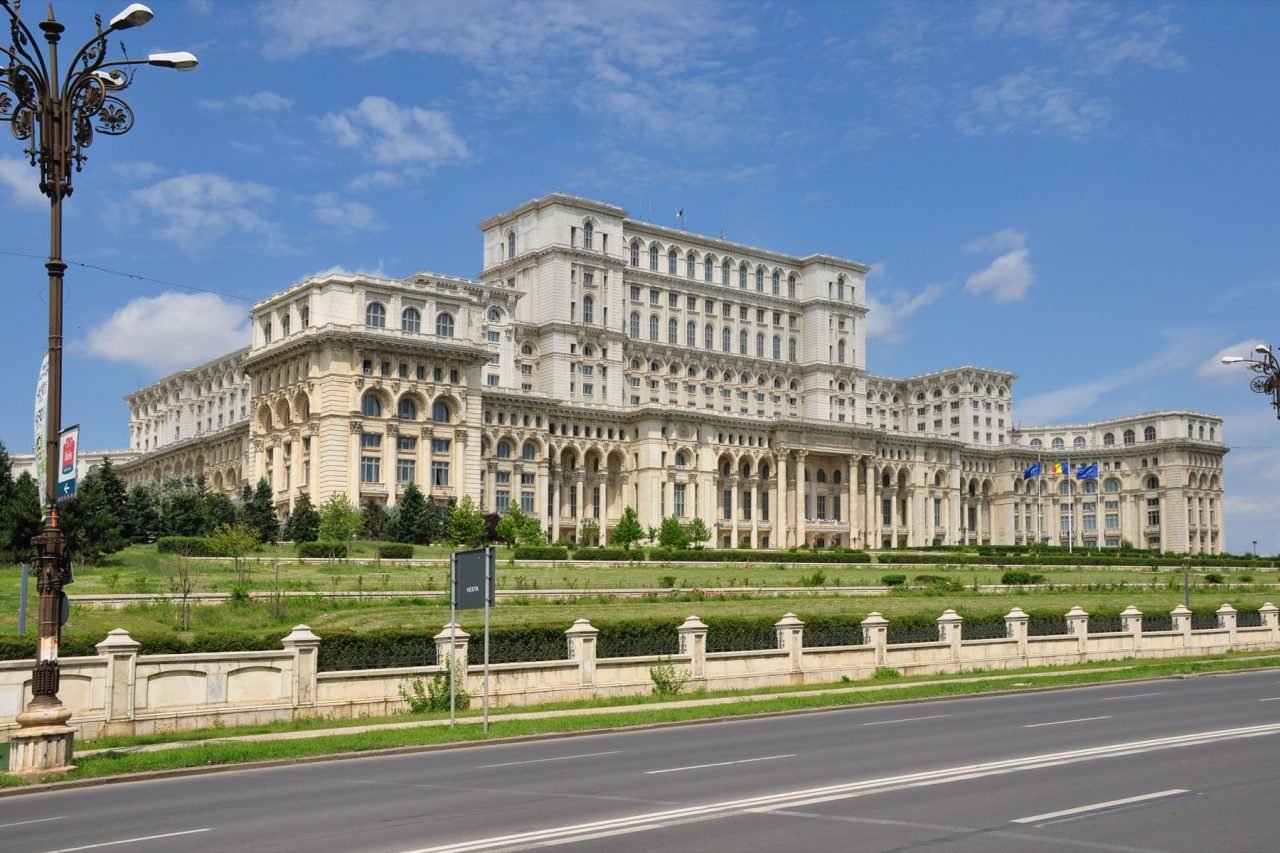 The Palace of Parliament

The Palace of Parliament (Romanian: Palatul Parlamentului) is located atop Dealul Spirii (Spirea’s Hill) in Bucharest. It is the second largest administrative building in the world (only the Pentagon is bigger). The construction of the building was ordered by dictator Nicolae Ceauşescu. But he never got the chance to use it. Not while he lived, that is…

The history of the Palace of Parliament

Also known as the People’s Palace, the Palace of Parliament was built in 1984. Construction of the building lasted for 13 years. Ceauşescu wanted to show the world he was the best leader of the Socialist Block with this impressive building, but his palace might have had a share in his downfall. Romania was in terrible financial trouble during the 80’s. Economic mismanagement led to heavy rationing of food, water, oil, heat, medicines and other necessities for the Romanian people. The Palace of Parliament was built with public funds and cost billions. This must have caused some resentment amongst the Romanians.

Nicolae Ceauşescu (1918 – 1989), was the Communist leader of Romania. His wife, Elena, was also into politics. They constructed the Palace of Parliament with the intention of living there later. As anti-government protesters demonstrated against the situation in Timișoara in December 1989, Ceauşescu perceived this as a political threat and he ordered military forces to open fire at the demonstrators. Many were killed and injured.

The revelation that Ceauşescu was responsible for the bloodbath in Timișoara, resulted in riots and civil unrest. These demonstrations are known as the Romanian Revolution. Ceauşescu and his wife fled the Romanian capital by helicopter but were captured by the military after the armed forces defected. They were both tried and convicted of economic sabotage and genocide and were immediately executed by firing squad on 25 December 1989.

The Palace of Parliament

The Palace wasn’t finished when Ceauşescu was executed, but the government decided to complete the construction. The building, first referred to as a symbol of Socialism, Totalitarianism and Communism, today stands as a symbol of Democracy. It’s the heaviest building in the world (it is said to sink into the ground by 6 millimeters (0,25 inches) each year) and measures a floor area of 365,000 square meters (3,930,000 square ft). Almost all materials used for the palace were made in Romania, including the huge amount of marble.

The only items from abroad were Swedish pumps for ventilation underground. It has 9 levels above ground but also 9 levels underground. In order to build it, one-sixth of the old city of Bucharest was bulldozed. Over 9000 buildings, including historical buildings, churches and houses were demolished to make room for the “People’s Palace”. No less than 20.000 to 100.000 workers were hired to build the palace and over 3000 lives were lost during construction. No wonder it’s haunted.

Secrets and facts about the Palace

Nicolae Ceauşescu must have been aware of the fact he was playing a dangerous game. He feared a nuclear attack, so he ordered for a fallout bunker to be constructed underneath his office. Due to a construction error, the bunker was placed on a different location, so he made sure another one was built. He could reach the bunker using a secret elevator and an underground passageway. The bunker’s walls are 1,5 meters (5 ft) thick equipped with an anti-explosion plate which cannot be penetrated by radiation. The bunker has nine comfortable apartments, an office, headquarters and a secured phone line. In addition two bunkers and eight escape tunnels were also designed.

He even wanted to build a metro line between the People’s Palace and the airport, so he could quickly be evacuated. On top of all that, he wanted the opportunity that the Union Hall ceiling could be opened for his presidential helicopter to pick him up in case of a war. He is said to have buried a cylinder containing secret information under the main staircase of the 13 September entrance. When he did this, he said the words “I leave you to this house”. Now that would be interesting to dig up!

The ghosts of the Palace of Parliament

According to people working graveyard shifts at the palace, the palace is a creepy place at night. Strange whistling sounds are heard in several parts of the building, sealed up areas are mysteriously unsealed, and security systems are triggered while no-one is around. The palace is also haunted by a young woman who’s begging people to help her.

The Palace of Parliament today

Today the palace houses institutions like The Chamber of Deputies, the Senate, the Constitutional Court and the Legislative Council. It’s also an important tourist attraction. Guided tours are offered daily. If you want to take a tour (you cannot enter on your own), you’ll need your passport (and you’ll have to hand it in) and walk through an airport-like security system. You’ll need a permit to take pictures. If you don’t pay that fee and you’re caught taking pictures, your camera will be confiscated. So, it’s strict, but certainly worth the visit.