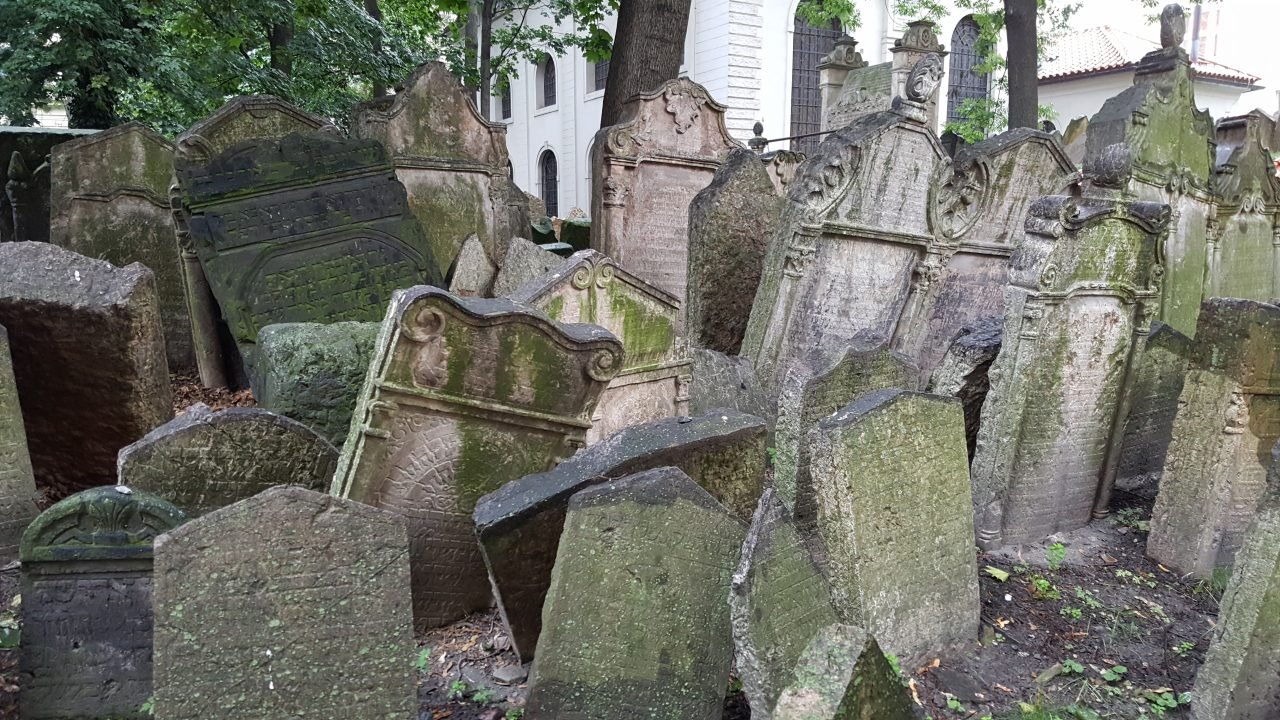 In the centre of Prague, in the Czech Republic, you will find an amazing cemetery. The Old Jewish Cemetery is exactly located on the spot between the old and the new center of the city. This Jewish district is known as Josefov. The first burial took place somewhere in the 15th century. The oldest, still readable stone dates back to 1439. The last person to be buried at the Old Jewish Cemetery was laid to rest here in 1787.

Normally, a Jewish cemetery would never end up in the center of a city. This was considered unclean. Originally, the Old Jewish Cemetery wasn’t anywhere near the center, but when the city grew, it literally grew around it. It is unknown how many graves the cemetery counts. There are about 12,000 visible headstones. But, it’s likely that there are over a 100,000 people buried here on this small piece of land.

Solution to the problem

By faith, Jewish graves may never be destroyed. When the cemetery was completely full, people started looking to expand it. When it became clear there was no more ground available, they needed another plan. The solution was found soon. The headstones of the older graves were removed and a new layer of soil was deposited on the existing graves. The new coffin would be buried in the fresh soil and the old headstone was placed behind the new one. That is why there are a number of headstones standing right behind each other in the cemetery. It’s an incredible sight!

Of course, the new layer of soil became full as well. So the process was repeated. Twelve times to be precise! This way the Jewish could bury their people in sacred ground and the faith was not to put to shame.

The Old Jewish Cemetery itself is not a creepy place. I’ve been here myself in 2017 and I thought it was beautiful and impressive. But there is a creepy legend about this place. This legend involves a mythical creature called a Golem. A Golem is a figure which resembles a human but made out of clay. This Golem is brought to life by a rabbi. There is also a Golem that roams the Old Jewish Cemetery. It was brought to life by rabbi Löw. Löw was worried about the poor population of Prague. They worked long hours, even the children. The rabbi created the Golem to help them with their duties. He also demanded him to protect the people of Prague.

Golems aren’t intelligent creatures. They cannot think for themselves. Löw wanted his Golem to be able to talk, so he put a note in its mouth each night. He would also remove it after the Golem had finished its job, but one night he forgot to remove the piece of paper and the Golem turned against him. According to the legend, the Golem still wanders the Old Jewish Cemetery at night.

The Old Jewish Cemetery is part of the Jewish Museum in Prague. To enter the cemetery, you’d have to buy a ticket to the museum. We went there early on a rainy day and we almost had the place to ourselves. Afterwards it’s well worth visiting the adjacend synagogue. The museum itself is quite impressive because it contains all the names of the fallen Jews during WWII. No wonder why this is one of the most visited museums in Prague!