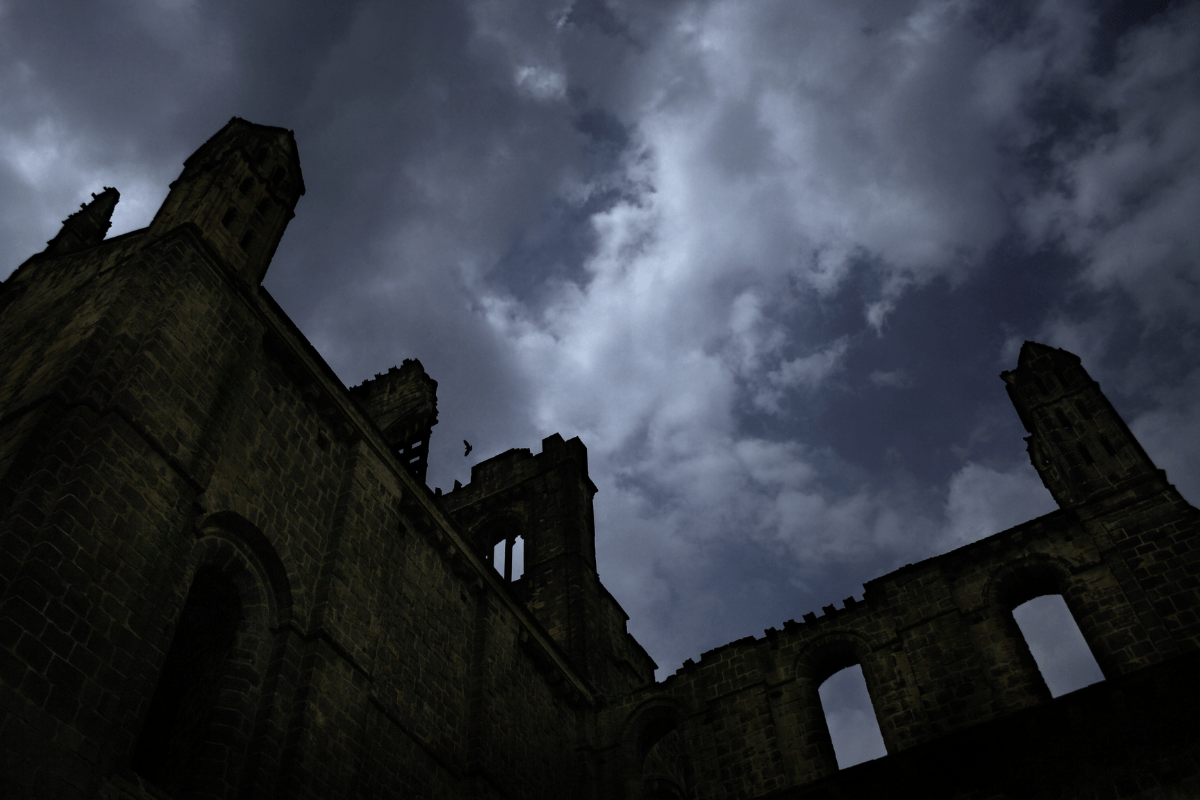 The most haunted castles in the world

When I was a little girl, I was immensely fascinated by castles. My vivid imagination was going wild if we visited one. That fascination has never left me. On the contrary: it is even stronger today. I love the stories, the history and learning about the lives of the people that once lived in them. And I now know that those lives weren’t as glamorous as I once thought.

Ten most haunted castles in the world

Old buildings have long histories. And stories. Some are funny, some gruesome and some tragic. The energy of those who once lived at castles is absorbed in wood and stone. Here you’ll find ten of the most haunted castles in the world. I will tell you a short story about each of these castles. The full story will be just a click away. I deliberately left the English, Irish and Scottish castles out of this summary. They deserve a story of their own.

Predjama Castle is one of the best-preserved cave castles in the world. It is located in Slovenia and was probably built in the 12th century. The castle was once home to Erasmus Leugg: a knight and robber baron. He was able to live a rather peaceful life until he killed Frederik III’s (the Holy Roman Emperor) kinsman. By doing this, he angered both the Roman Emperor and the House of Habsburg. He fled to his castle. Predjama was besieged for a year. Leugg’s enemy even poisoned the water well. So, how was he able to survive? You should read the story of Predjama Castle for that. Leugg was murdered while in the bathroom and he still haunts the castle. But, he’s not the only ghost that haunts this impressive fortress.

Today, this beautiful white Danish castle is a luxury hotel. It’s a popular tourist attraction and wedding venue, but do the people who stay there know it’s haunted? Over 100 (!) ghosts haunt Dragsholm Castle. The castle was built in 1215 by the Bishop of Roskilde. It was attacked a couple of times through the centuries. From 1536 until 1664, the castle was used as a prison for noble and ecclesiastical prisoners. Even the then ruling Bishop of Roskilde was imprisoned here. He is one of the ghosts that haunt Dragsholm Castle. But did you know that the 4th Earl of Bothwell, James Hepburn, died an agonizing death here, too? Read all about the castle and its ghosts in this story.

This castle is a haunted castle in the Czech Republic which is surrounded by mystery. The castle was built in the 13th century, but there are some strange things about it. For instance: the location. It is built right on top of a cliff, surrounded by forests, swamps and other cliffs. It was very hard to reach, even today. No trade routes are near either. Houska Castle has no external fortifications and many of the outside windows are fake. There’s no water source within the castle, so why was this castle even built? The answer to that is rather creepy. Houska Castle was built on top of a bottomless hole. To cover it, that is. This hole is believed to be a gateway to Hell. Fascinated by this story? Read more about it!

The next castle on the list is rumoured to be one of the most haunted castles in Italy. This 11th century castle was owned by both the Romans and the Knights Templar. At some point, Castello Della Rotta was abandoned and was left in ruins. When the place was eventually renovated, workers stumbled upon many skeletal remains. One of the skeletons is believed to be a Templar Knight. Many legends and ghost stories surround this castle. A blond woman, a reading cardinal, a vengeful knight, a monk, a naughty child and his nanny are just some of the ghosts that haunt this place. Click on the link to read more about Castello Della Rotta.

Egeskov Castle is the second Danish castle on this list of haunted castles in the world. It was built by a nobleman named Frands Brockenhuus in 1554. Being a noble, especially during the Reformation and the Count’s Feud, was a dangerous thing. This is why this manor is fortified and has several escape routes. The castle is haunted by white lady, who is believed to be Rigborg Brockenhuus. She fell in love with a commoner and got pregnant. The poor girl was locked away in a castle tower. Even though Rigborg didn’t die at Egeskov Castle, she still haunts it. There’s also a creepy doll legend about the place. Do you want to know what this legend is? Read the full story.

The medieval German castle Burg Eltz is haunted by a very brave young lady. Agnes Eltz was supposed to marry the Knight of Braunsberg, but she didn’t like him at all. When he tried to kiss Agnes during a ball she smacked him in the face. The humiliated knight left the castle but not without swearing revenge first. The first few weeks, the men (her father and brothers) stayed close to the castle in case the knight would return.

But the weeks turned into months, and the family assumed the Knight of Braunsberg accepted his defeat. But, when the Eltz’ men went on a hunting trip the knight returned with his soldiers. They killed everyone on their path. Agnes was trained for combat by her brothers. She took her brother’s armour and went to battle. The Knight of Braunsberg thought he was dealing with a man when he thrust his sword into her chest. She died instantly, but still haunts the family castle. Read all about brave Agnes here.

The Norwegian stronghold Akershus Castle was of great importance in Scandinavian history. Whoever owned the castle, ruled Norway. During the centuries, both the Swedish and the Norwegian armies fought to siege the castle. So much blood has run through these streets and courtyards that Akershus Castle is considered to be the most haunted place in Norway. The castle is not just haunted by human spirits.

The spirit of a horse and the spirit of a vicious dog both haunt the main entrance. The dog is called the Malcanisen. The main entrance was the weak spot of the castle and one of the guards came up with a solution to this problem. He took one of his most beloved and fierce guard dogs and buried it alive near the entrance. Legend says the dog returned as a ghost, more vicious than he was when he was alive. You can read the whole story of Akershus Castle here.

The Castle of Good Hope is a fortress in Cape Town, South Africa. It is the oldest building in the country. The castle was built between 1666 and 1679 by slaves, soldiers and sailors to supply the ships sailing from The Netherlands to Indonesia (East India). Later, when the Dutch had annoyed the English fleet, it became a safe haven. During the Second Boer War (1899-1902) Castle of Good Hope became a prison.

The windowless dungeon where the prisoners were held often flooded in Winter. Many prisoners drowned during these floods. The Castle of Good Hope is a very haunted place. One of the castle’s ghosts is governor Pieter Gijsbert van Noodt. In 1728, seven men were hanged on the courtyard. Van Noodt refused to grant the prisoners’ last wishes. One man cursed Van Noodt right before he was hanged. Van Noodt died the same day and still haunts the castle. Read the full story here.

Originally, Château de Brissac was built in the 11th century. But, the French castle was rebuilt in 1455, and hasn’t had  many big changes since. Today, the castle is still owned by the Brissac family. They have opened the castle to the public. You can even spend the night here, but there’s something you should know before you book your room. Château de Brissac is haunted. Haunted by a Lady in Green (La Dame Verte).

She is believed to be the spirit of Charlotte de Brézé, a woman who was caught having an affair within the castle walls. Her husband, Jacques de Brézé, killed her and her lover in a fit of anger. Later, Jacques fled the castle in terror because the ghosts didn’t leave him alone. Charlotte’s lover eventually left the castle, but she is still there. And even though the family has gotten used to her presence, she’s still pretty scary. Her face is that of a skeleton. Read all about this beautiful French castle here.

Hunyad Castle, or Corvin Castle, is often associated with Vlad the Impaler. The castle, built by John Hunyadi, the ruler of Transylvania, was originally located in Hungary. But, due to border changes, it is now located in Romania. Vlad the Impaler is said to have been imprisoned here. He kept himself alive by eating rats. This is also the place where his fascination for impalement started. If he’s ever been here, that is. There’s no evidence for that. But Corvin Castle is indeed cursed and haunted. A few years ago, some tourists decided it was fun to be locked in after hours. When they were found the next morning, they were terrified and black and blue. One of the castle’s ghostly residents happens to be a torturous poltergeist. Read about him and the other spirits here.