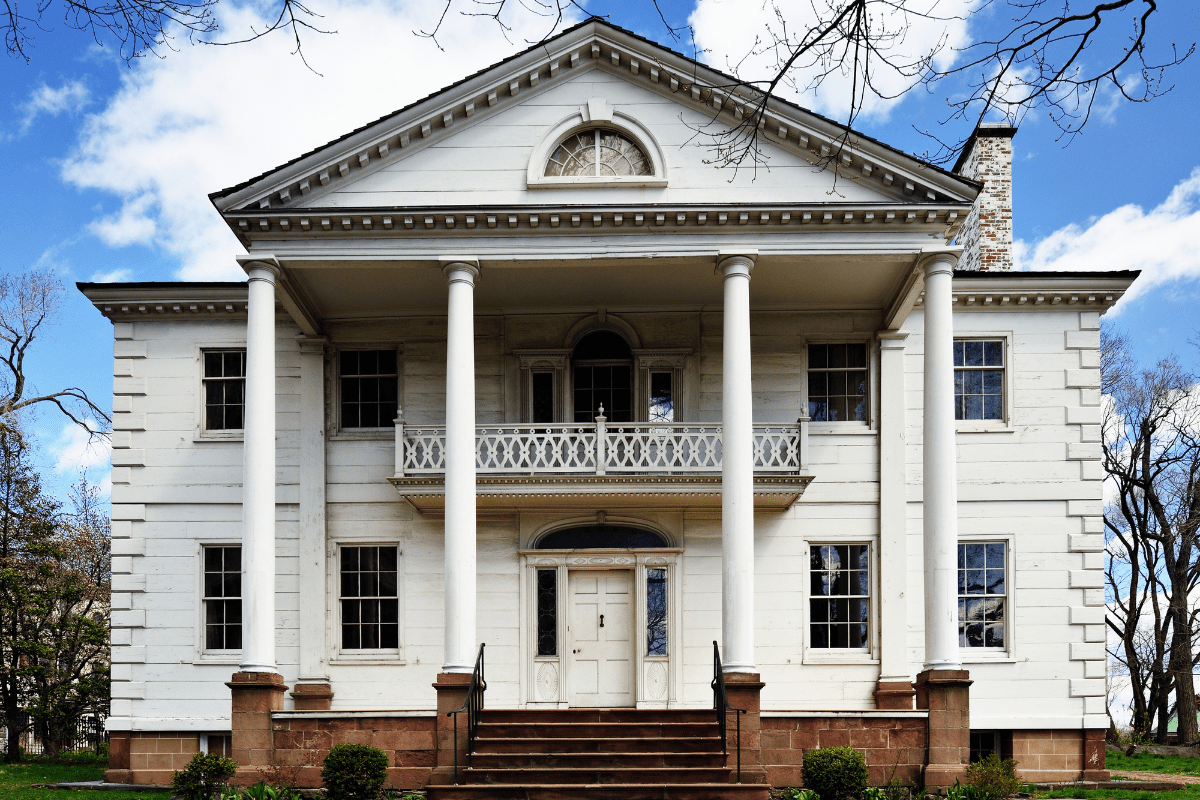 The Morris-Jumel Mansion was constructed in 1765, which makes it the oldest house in Manhattan, New York. It was originally named “Mount Morris” because it was located on one of the highest points of Manhattan, offering a good view on the Harlem River. Today, the mansion is a museum, and some people claim strange things are happening here…

The history of the Morris-Jumel Mansion

The Morris-Jumel Mansion was the summer house of the British Colonel Roger Morris and his American wife Mary Philipse. The mansion was built on 135 acres (54 ha) of land, stretching from the Harlem River to the Hudson River (between 155th street and 165th street). Mount Morris, as the mansion was originally named, was also a working farm with fruit trees, cattle and a variety of crops. The Morris Family had to leave their mansion during the outbreak of the Revolutionary War in 1776, a war between America and Great Britain. At the end of the war the Morris Family, being Loyalists, left America to live in England.

During the Revolutionary War (1775 – 1783), the Morris-Jumel Mansion was occupied by General George Washington. It was made their headquarters from September 14 to October 21, 1776. The view from Mount Morris was perfect for observing troop movements. This advantage was used to plan his army’s first successful victory on September 16, during the Battle of Harlem Heights. But despite this, he was forced to leave the mansion in October. Mount Morris was used by both the British and the Hessian army for the rest of the war.

After the war, it was confiscated by the State of New York and sold to cover war debts. It was briefly used as a tavern. By then, General Washington was President Washington and he had a symbolic dinner there with his cabinet secretaries and their wives on July 10, 1790. Shortly after that, the tavern closed, and the mansion was abandoned once again.

Mount Morris was bought in 1810, by a wealthy French merchant and his wife Eliza. Stephen Jumel met his wife Eliza Bowen at the theatre some years before. Stephen was married at the time, but he was very charmed by Eliza, who soon became his mistress. Eliza grew up in a poor Rhode Island family. Her mother was a servant who earned some money on the side with prostitution. Eliza was convinced she was the illegitimate daughter of George Washington and she was eager for a better life.

When she found out Stephen was a rich man, she tricked him into marriage by faking a fatal illness. Her dying wish was to marry him, and so they married. There were rumors that Stephen and Eliza spent as much time apart as possible. Stephen stayed in France most of the time, returning just a few times. Eliza became a shrewd businesswoman when Stephan was away, long before women worked outside the home.

When Stephen’s business was floundering, Eliza started trading real estate, making her the wealthiest woman in New York. Stephen died in 1832. There are some theories about his death. Some claim he died of pneumonia, others say he got seriously injured in a carriage accident and there are people who claim Eliza had something to do with his death. In this version, Stephen fell off a hay cart onto a pitchfork. Eliza was said to have removed his bandages, so he bled to death. Perhaps this story was made up out of jealousy, who can tell? Shortly after Stephen’s death, Eliza re-married the controversial ex-vice President Aaron Burr, but she quickly found out he used her money to pay off his debts. She filed for a divorce in 1834 which was granted in 1836. Burr died shortly after.

When Eliza died in 1865, she left most of her money and belongings to a local church and other charities, which infuriated her relatives. They spent two decades fighting over her will. When they finally succeeded, they sold the land and the mansion to a syndicate of land developers. The mansion stood empty for years after that, until it was turned into a museum. The Morris-Jumel Mansion is a New York Landmark since 1967 and an Interior Landmark since 1975. Most of the original furniture of the former owners is still at the house, and they may be trigger objects to the former residents.

The ghosts of the Morris-Jumel Mansion

When Eliza was still living in the mansion, she used to complain about the fact it was haunted. She heard and saw things she could not explain. People waved her complaints away because the poor woman was going a bit mad towards the end of her life, but now a lot more people are convinced of the fact the historic landmark is indeed haunted.

The ghosts of the Hessian and American soldiers

A Hessian soldier lost his life on the stairs in the mansion and has been seen wandering around ever since. He sometimes appears on the stairs. The ghost of an American soldier scared the living daylights out of two school teachers on separate occasions by walking out of a painting in broad daylight. One of these teachers fainted.

In the 1960’s, a group of school children visited the Morris-Jumel Mansion. When they were waiting in the front lawn to enter the mansion, a red-haired woman came out on the narrow second-story balcony telling the children to keep quiet because her husband was very sick. The children didn’t pay much attention to the lady. They assumed she was an actress belonging to the museum. The curator of the museum collected the children up and when they arrived at Eliza’s bedchamber, they all pointed at the mannequin yelling it was her they had seen. The curator was sure there was no-one else inside the mansion at the time.

When a séance which was also live broadcasted on radio was held inside her room, it was cut off because of all the foul language. Nowadays, Eliza has settled down a bit. She seems like a pleasant housemate who prefers female company.

The Morris Family as well as the Jumel Family had servants. One of the female servants was caught having an affair with someone in the family. She committed suicide by jumping from one of the windows. Her ghost is seen on the third floor where the servant’s quarters used to be. The voices of two women laughing have been heard from the basement. The kitchen used to be here. Perhaps it’s two servants having fun doing their job.

The ghost of Stephen Jumel is said to haunt the mansion as well. He has been heard moaning in agony, probably re-living his final moments. Eliza’s second husband, Aaron Burr also haunts the mansion. He never wanted to divorce Eliza in the first place. A handful of people even claim to have seen the apparition of George Washington at the mansion.

Other paranormal activity at the Morris-Jumel Mansion are the sound of heavy footsteps, disembodied voices, doors opening and closing by themselves, lights being turned on and off and furniture tends to move on its own accord. But you can find out by yourself because you can learn how to ghost hunt at the Morris Jumel Mansion! Well, when Covid-19 is under control, that is.

The Morris-Jumel Mansion is a museum today, but it offers paranormal tours as well. These tours start with a ghost hunting crash course followed by an investigation in the house. There’s a good chance you’ll catch something!