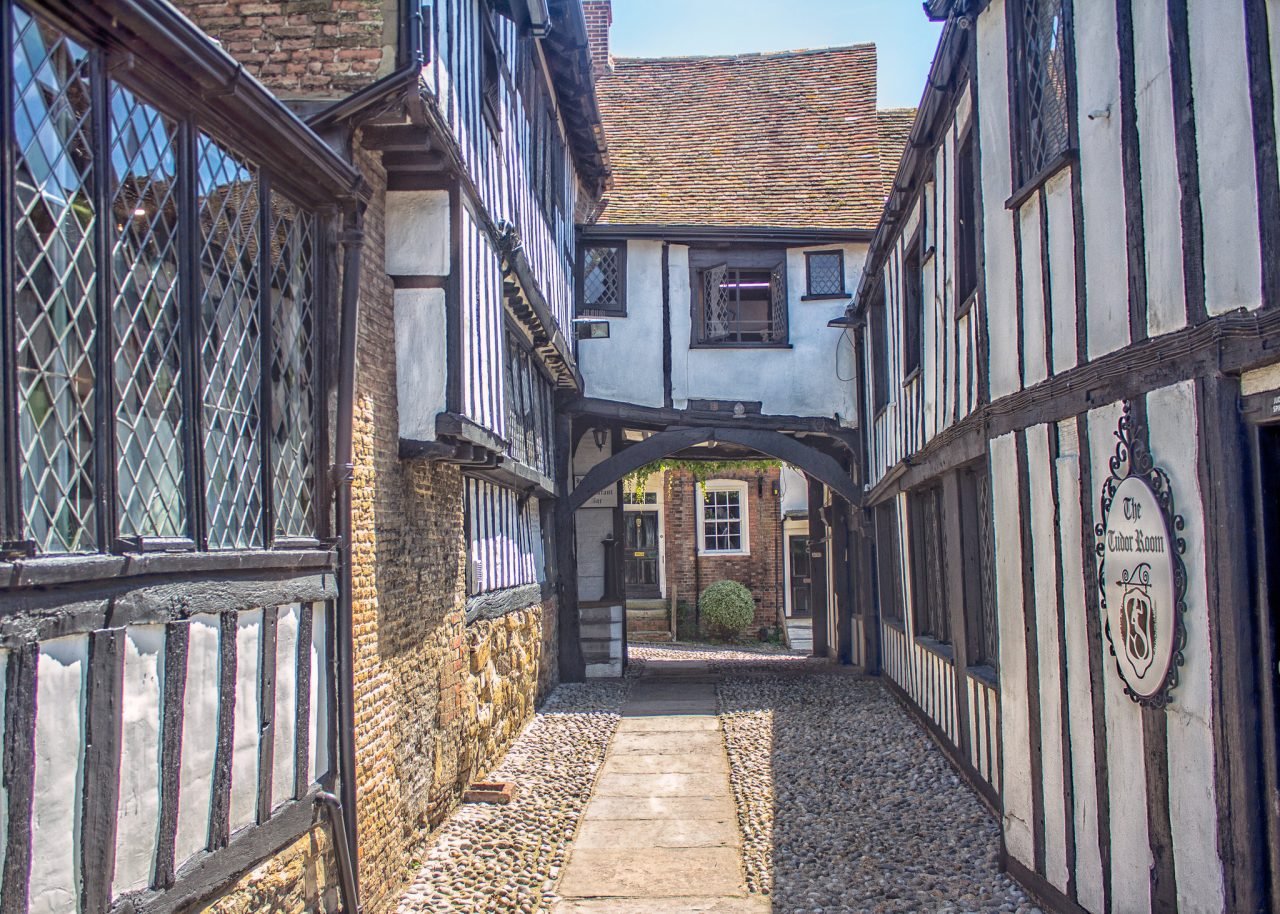 In the ancient town of Rye, East Essex, you can find the Grade II historical Inn the Mermaid Inn. It has a long, interesting and turbulent history. Today, the inn serves both British and French dishes and has received several prizes, along with the AA Rosette prize. But, you won’t be having your dinner alone…

The history of the Mermaid Inn

The building of the Mermaid Inn, as we know it today, was built in 1420. The original cellars are much older: they date from 1156. In the 16th century, additions in the Tudor style were added. Mermaid Street, on which the Mermaid Inn is located, was once the town’s main road. The inn became popular with sailors, for it is close to the Rye Port. This port also provided ships for the Cinque Ports Fleet. This fleet supplied to the crown until 1558.

During medieval times, the Mermaid Inn was a popular alehouse. It brewed its own ale and lodging was cheap. Catholic priests who had fled from the continent escaping the Reformation during 1530, found shelter at the Mermaid Inn. Queen Elizabeth I was also a guest at the inn somewhere between 1550 and 1570. But, during the 1730’s it had another purpose: then it was a smugglers’ headquarters.

During the 1730’s and 1740’s, a large group of smugglers called the Hawkhurst Gang, controlled the territory from Kent to Dorset. Other establishments such as the London Trader Inn, the Flushing Inn and the Olde Bell Inn had a close connection to this gang as well. The main location for the Hawkhurst Gang was the Oak and Ivy Inn in Hawkhurst, but the Mermaid Inn was their secundary location.

The secret tunnels underneath the old cellar of the inn played an important part during that time. If they were in need of a quick getaway, they used the tunnels that led to the Olde Bell Inn (which was built in 1390). In 1747, the Hawkhurst Gang was defeated in the Battle of Goudhurst. Two of their leaders, Arthur Gray and Thomas Kingsmill, were executed in 1748 and 1749.

After 1770, the Mermaid Inn ceased functioning as an inn for quite some time. A man named Charles Piole bought it in 1847 and he turned it into his home. Little is known about this man, but what I did find is that he was a merchant. In 1913, the Mermaid Inn became a club under the ownership of May Aldington. She was the mother of novelist Richard Aldington. The club was a much-loved place for artists. During WWII, the Mermaid Inn functioned as a garrison for Canadian officers. One of these stationed officers, a man named M.L. Wilson purchased the inn after the war.

The Mermaid inn had the honour of hosting a luncheon for Her Majesty the Queen Mother when she was named as the Lord Warden of the Cinque Ports during her visit to Rye in 1982. Other famous people who stayed at the Mermaid Inn are Lord Alfred Douglas (Oscar’s Bosey), Charlie Chaplin, Prince Edward, Pierce Brosman and Johnny Depp. I wonder if they stayed in one of the haunted rooms?

The ghosts of the Mermaid Inn

It is believed that at least 5 spirits reside at the inn. Some are smugglers, some their mistresses and some are other characters. Several rooms are haunted and both guests and staff have experienced paranormal activity. Some rooms are more haunted than others. Let’s have a closer look at the most haunted rooms.

This room is haunted by a White of Grey Lady who sits in a chair near the fireplace. Some guests staying at this room have reported finding their clothes quite wet on this particular chair the next day. There are no pipes or windows near it.

Once, a young couple stayed in this room and something strange happened to the man when his wife briefly left the room. He had the sensation of being kicked in the back by an unseen force and at the same time, a feeling of well-being washed over him. When his wife returned to the room, everything went back to normal again.

A lady in white has been seen this room. She walks across the room and even right through the door. She stops at the foot of the bed for a moment on her ghostly walk.

This room is haunted by a man who has terrified a number of guests already. He is known to walk from the bathroom across the main room. He walks right through the wall!

A couple of years ago, a film crew’s equipment picked up some orbs flying across this room. These were not visible to the naked eye. A year later, a séance took place in this room. This séance was performed by a medium and 5 members of the staff. Once the medium started the séance, her face and voice started to change and the room was entered by a figure and a dog. One of the people at the séance put their hand out, and could clearly feel a dog’s fur while the hand disappeared into a dark shadow.

Room 16 certainly is an interesting room! A ghostly duel has been witnessed here by several guests. Two men are fighting each other wearing 16th century clothing. After a while, one of the men is killed. The other man drags the murdered man into an adjacent room, throwing the body through a trapdoor into the cellar. This room is a paranormal hotspot as it has many unexplained anomalies that have been experienced in the middle of the night.

This room was named after Thomas Kingsmill, one of the Hawkhurst leaders. He also inhabited the Mermaid Inn. This room is haunted by the ghost of a woman who is believed to have been the wife of Hawkhurst Gang leader Arthur Gray. The rocking chair in the room would be the center of her haunting. When it would rock on its own, the room would instantly turn icy cold. The chair was eventually removed from the inn because it caused so much disturbance.

Room 19 is haunted by a man in old-fashioned clothes. An American guest who stayed in the room fled to the room where her sons were sleeping when she saw the man sitting at the end of her bed. She refused to return to her room and she remained awake all night with a duvet pulled around her head.

Other areas of the Mermaid Inn

One employee has even quit his job because of a paranormal encounter. He was tending to the fireplace when all the bottles on the bottom shelf fell off at once. The inn is also haunted by a maid. She most likely was the girlfriend of one of the smugglers of the Hawkhurst Gang. She was probably murdered by his fellow smugglers because they feared she knew too much and would expose them.

In October 1951, the Mermaid Inn was listed at Grade II by English Heritage. You can stay in one of the 31 rooms at this historical location, if you dare! Today, the inn is owned by Judith Blincow and Robert Pinwill, who bought the Mermaid Inn in 1993. Judith worked here before she bought it. She hasn’t experienced any paranormal activity herself, but all the stories of her staff and guests have convinced her that the inn is indeed very haunted. You can take a look (online) inside the Mermaid Inn with the Mermaid Inn Tour.

Ah Paris! City of romance and… ghosts! The Paris Catacombs aren’t the most ideal place to take your date, unless she’s interested in the paranormal and in creepy places. Underneath the city of Paris there is an underground corridor system which is 290 km (180 miles) long. These corridors originated in the Roman times, and […]
If you take a close look at Sweden, you’ll see that it consists of many small islands. Especially around the capital of Stockholm. One of these islands, Lovön, is the site of a magnificent palace: Drottningholm Palace. Even today, this is the private residence of the Swedish royal family. But they don’t live there alone… […]