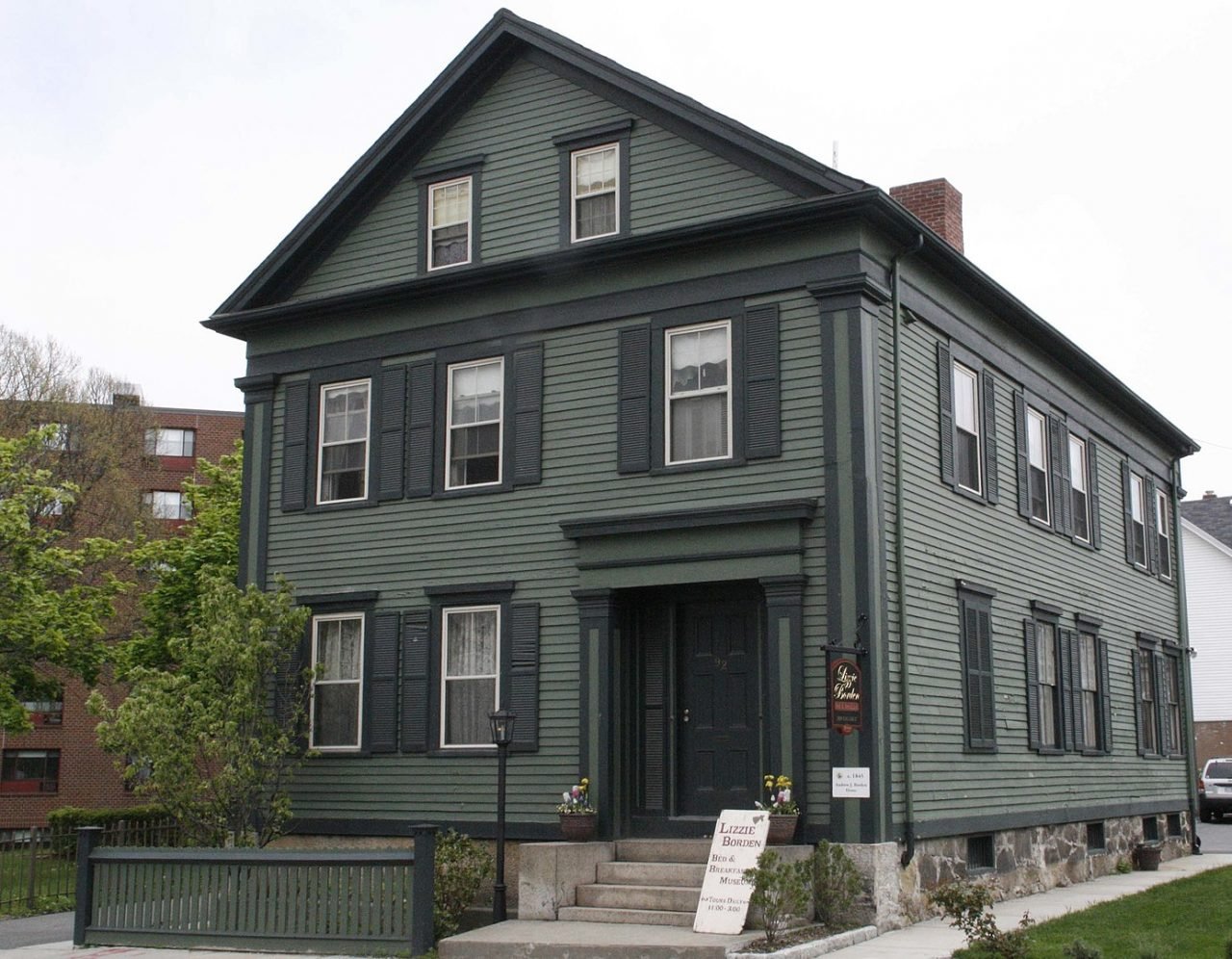 In the town of Fall Rivers, in American Massachusetts, there is a twenty-room Victorian house that serves as a Bed and Breakfast. In terms of decor, the house is still completely in the same condition as it was in 1892, the year the last residents lived in this house. Why was it never inhabited after 1892? Well, because a gruesome double murder was committed here!

The history of The Lizzie Borden House

In this large, but simple, house lived Andrew Jackson Borden, his second wife Abby Durfee Gray Borden and Andrew’s two children from a previous marriage: Emma and Lizzie. Their mother had died years earlier. The daughters were unmarried and therefore still lived at Andrew’s home. Father Andrew, through the sale of furniture and later real estate, had risen from a poor slob to a very wealthy man. But, even with all those dollars in his pocket, he remained a terrible miser who had many, many enemies.

Fall Rivers was a simple community, much simpler than “The Hill” farther down the road. But Andrew wanted to stay close to his business, so he settled for a modest house without sewage or running water. Lizzie and her older sister Emma, lived under one roof with their parents, but according to the maid, Irish immigrant Bridget Sullivan, they never ate together. Lizzie in particular had a complex relationship with her strict father and new stepmother.

Family tensions had been simmering for years, but worsened in the year 1892. Andrew Borden resented the fact that children were coming into his yard because of the chicken coop that 32-year-old Lizzie had built herself that year. So he took his small axe and beheaded all of Lizzie’s beloved chickens. Lizzie was deeply distressed and even left the house for some time to live with relatives elsewhere. Tensions got worse when Andrew amended his will. All his money and possessions were to be bequeathed to stepmother Abby. Andrew also gave away real estate to Abby’s relatives. This was against the wishes of Lizzie and Emma, who saw their inheritance disappear.

In 1891, the Borden home had already been targeted by intruders, who stole a lot of money and jewelry from Andrew’s bedroom. Andrew became paranoid in response, and immediately put locks on windows and doors everywhere. He insisted that everything would be locked, even when people were in the house. One week before the murders, all family members became ill. The cause was probably spoiled milk, because a refrigerator was too much of a luxury. But Andrew was convinced that people were trying to poison him and his family.

The murder of Abby Borden

On August 3, 1892, a day before doom, the brother of Lizzie and Emma’s late mother unexpectedly came to stay. He, John Morse, was in the area on business and immediately wanted to catch up with Andrew. He was sleeping in the guesthouse on the second floor. Sister Emma was out of town to visit friends. After breakfast, which was served by Bridget, John and Andrew chatted a bit in the sitting room. After John left around 8:45 A.M., Andrew left for a long walk. Abby, in the meantime, tidied up the guesthouse.

There, however, she was attacked with a small axe. The first blow, just above the left ear, caused her to slam her face against the floor. The attacker, according to the pathologist anatomist, then allegedly sat on her back and struck the back of her head with the axe no less than 19 (!) times. Bridget was still not feeling well after the alleged poisoning, and was in bed at the time. She did not notice anything about Abby’s murder.

The murder of Andrew Borden

When Andrew returned after his walk, around 10:30 A.M. that morning, the door kept jamming, causing him to call Bridget. She tried to get the door open from the inside, but even that failed. As Bridget ran along the stairs to get tools, she heard Lizzie laughing from above. She paid no further attention and opened the door for Andrew. Since Andrew was already 70, he lay down for a while on his favorite bench.

Lizzie was busy in the garden at the time. It was around 11 A.M. that Bridget heard Lizzie calling for help. Lizzie told Bridget to go get the doctor. Andrew’s face had been shattered with the same small axe that had been used to kill Abby. Although he had received “only” 11 blows, his injuries looked terrible. For example, his left eyeball had been finely split in two.

The doctor, of course, had no choice but to pronounce Andrew dead. Abby’s body, however, had not yet been found. She was later discovered by an already terribly distraught Bridget. Autopsies were performed in the living room of the house. The police questioned Lizzie and Bridget. In the process, Lizzie told contradictory things: first she had been working in the barn, then in the garden, then in the basement. She told the officers about her father’s poisoning theory, but no traces of it were found at Andrew and Abby’s house.

Lizzie herself had tried to buy poison at the local drugstore several days before the murder. She explained that she needed it to clean a seal skin scarf, but the drugstore did not give it to her. Lizzie also stated that someone must have been in the house, but all the doors were, as always, locked. The evidence piled up against Lizzie, and when Bridget saw Lizzie burn a blue corduroy dress in the kitchen a few days later, it was almost as plain as day.

Bridget also told the officers about the fact that she had heard Lizzie laughing upstairs around 10:30 A.M., even though Abby had been killed by then. Also found in the basement was a small axe with a broken handle. Because DNA testing could not be done at that time, and the axe looked “clean,” it was not used as evidence. But with all the other evidence and oddities, Lizzie was arrested the day after the funeral.

Lizzie Borden was strangely charged with three murders; the one of her father, her stepmother AND the murder of both of them. She did not speak during the trial, leaving everything to the family’s lawyers. During the hearings, she listened attentively to everything that was said, as if it were about someone else. She also remained calm and emotionless the entire time, as she did during the police interrogations.

However, when Andrew and Abby’s skulls were shown in court, Lizzie fainted dramatically. These had, in fact, been removed during the autopsy. After deliberating for over 1.5 hours, the jury decided that Lizzie was NOT guilty. Oddly enough, no one else was under suspicion for the murder of Andrew and Abby Borden. Perhaps Andrew also had higher-level enemies and everyone was glad he was dead….

Lizzie decided, even after all the accusations, to continue living in Fall Rivers. In a different house, that is. She did change her name to Lizbeth Borden. Lizbeth was well regarded by the entire community until her death in 1927. She died of pneumonia. Her sister Emma, happened to die nine days after Lizzie. Although Emma had always stood by her sister, however, the sisters had not spoken to each other for many years. Perhaps one of the sisters wanted to confess because, after all, they both had a motive for the murders. Also, of course, it suited them very well that Abby had lost her life first. So with that, the inheritance went to them and not Abby’s family….

You can stay overnight in the Lizzie Borden House, if you dare. The couch on which Andrew bled to death still stands in the sitting room. Because the murders of Andrew and Abby were so brutal, their spirits are still present in the house. Both are seen regularly. The ghosts are polite to guests. Andrew even seems to appreciate all the activity in the house. For example, he neatly answers all questions through the EVP (a device used to display ghost voices). Abby has been lingering in the guesthouse. Thus, a woman with a gray bun is often seen there.

Bridget left the house after the funeral, but apparently returned after her death. Thus, cold spots are felt in her room and a woman is seen in maid’s clothing. Also, an EPV caught the words, “Ma’am, come quick!”, probably shouted by Bridget when she found Abby. Also, the ghost of a cat haunts the third floor. Some guests have felt it rub its head against their legs. In addition, shadow people are frequently seen and lights go on and off by themselves. Pleasant dreams!

Do you want to read more ghost stories in the USA? Please click here.

If you take a close look at Sweden, you’ll see that it consists of many small islands. Especially around the capital of Stockholm. One of these islands, Lovön, is the site of a magnificent palace: Drottningholm Palace. Even today, this is the private residence of the Swedish royal family. But they don’t live there alone… […]
In the ancient town of Rye, East Essex, you can find the Grade II historical Inn the Mermaid Inn. It has a long, interesting and turbulent history. Today, the inn serves both British and French dishes and has received several prizes, along with the AA Rosette prize. But, you won’t be having your dinner alone…  […]
The ruins of Berry Pomeroy Castle can be found in South Devon, near the village of Berry Pomeroy, Totnes. Inside the earlier castle ruins, you’ll find the remains of a 16th century Tudor Mansion. The ruins are in the middle of nowhere and are best to reach by car. The castle is now owned by […]
The Golden Fleece is an inn and pub located in York, England. The seemingly narrow building has many stories to tell. Perhaps a normal passerby won’t see the difference between the Golden Fleece and any other pub in York, but the locals know it’s haunted. Haunted by at least 15 ghostly residents.  The history of […]