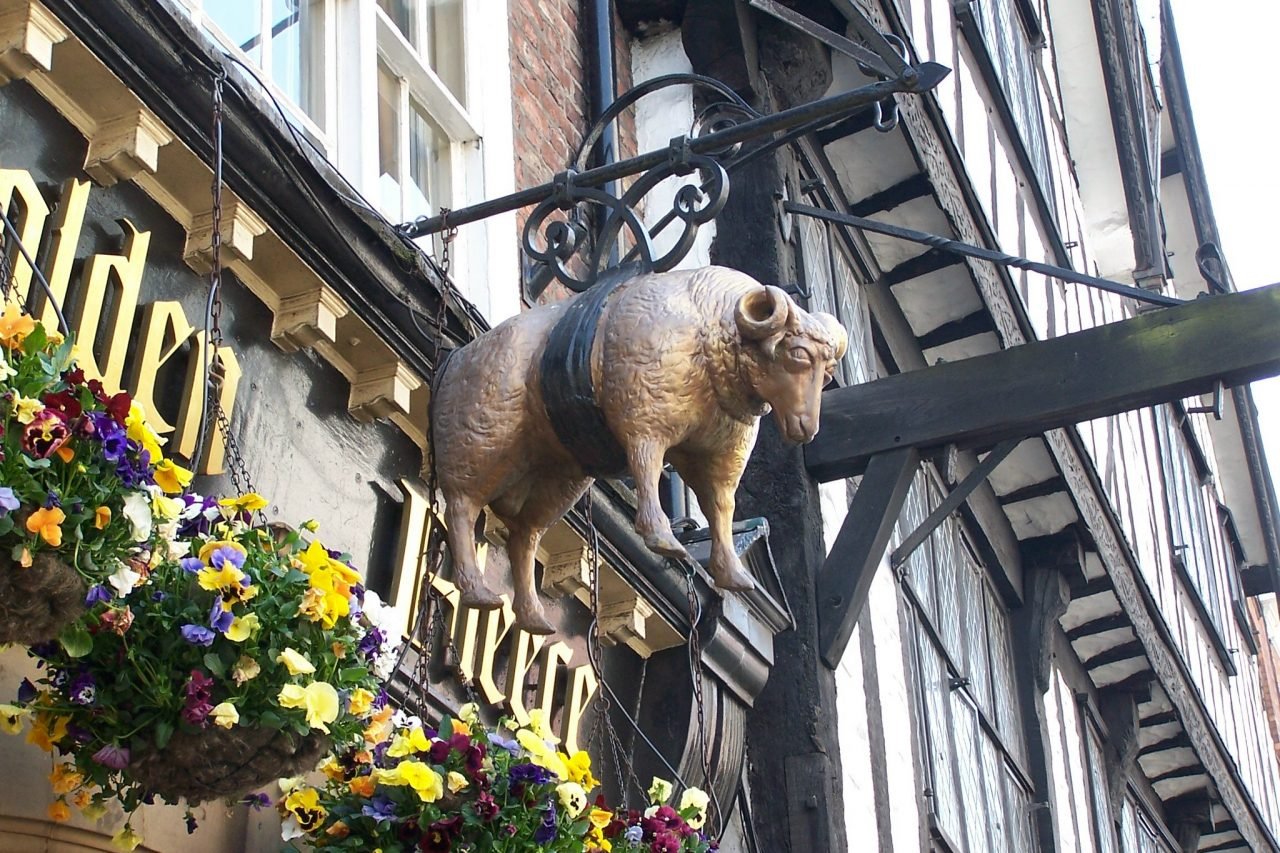 The Golden Fleece is an inn and pub located in York, England. The seemingly narrow building has many stories to tell. Perhaps a normal passerby won’t see the difference between the Golden Fleece and any other pub in York, but the locals know it’s haunted. Haunted by at least 15 ghostly residents.

The history of the Golden Fleece

The Golden Fleece was already mentioned in the York City Archives as far back as 1503. It is believed that it was once owned by members of the Merchant Adventurer’s Guild, who traded in fleeces and wool. Hence the golden fleece hanging above the entrance door. It has been an inn since 1656, though officially licensed in 1668. In the early 18th century, the Golden Fleece was owned by John and Alice Peckett. John Peckett was the Lord Mayor of York around 1702. The backyard of the inn is named “Lady Pecketts Yard”.

You can find the Golden Fleece on “Pavement” which is in the centre of York. It overlooks the medieval shops of The Shambles and it has a clear view on the York Minster. It is situated next to the medieval timber-framed Herbert House (Grade I listed). The Golden Fleece seems like a narrow building, but once inside you’ll be surprised how deep it is. The inn was restored and rebuilt in the 19th century and in 1983, it was designated as a grade II listed building by English Heritage. The pub is on the ground floor and there are four guest rooms above. But, staying over is not for the faint hearted!

The ghosts of the Golden Fleece

York is a very haunted city. And the Golden Fleece is no exception. It is said that at least 15 different ghosts haunt this building. A few of which have been seen more often and have been given (nick)names. Let’s take a look at the spectres of the Golden Fleece.

Many guests reported seeing and hearing a woman going up and down the stairs in the middle of the night. This ghost is believed to be the spirit of Lady Alice Peckett. She’s also known for moving furniture around because she doesn’t agree with how it was placed.

Another ghost that is often seen and heard is the ghost of the Canadian Airman. His name was Geoff Monroe. He fell to his death from one of the upper windows of the hotel during WWII. The airman sometimes appears to guests on the third floor in the middle of the night wearing his full military uniform. He doesn’t speak, he just stands there in the dark gazing down at them.

One Eyed Jack and the Grumpy Man

Two rather unpleasant ghosts of the Golden Fleece are a ghost named One Eyed Jack and a man who is often seen in his company referred to as the Grumpy Man. One Eyed Jack wears a 16th or 17th century red frock coat and he carries an old-fashioned pistol. He is often seen in the bottom bar of the pub. The Grumpy Man seems to like it there, too. This ghost sits at the bar just like a living person, and he angrily glares at people. If he’s approached, he is said to mutter some curse words before vanishing. He leaves behind a feeling of dread.

A very kind and harmless ghost is the ghost of a very young Victorian boy. It is believed that he was trampled to death by a horse while he was playing in front of the pub. He rarely interacts with the living, but he is known to pull innocent pranks on people. When that happens, soft giggling can be heard. The Victorian Boy is often seen in the bar.

Roman soldiers in the cellar

Many centuries ago, Roman soldiers once walked the grounds of York. Also where the Golden Fleece is located today. Many people have seen Roman soldiers in full armor marching through the inn’s cellar until disappearing through the walls. They don’t acknowledge the living. They are more likely a physical imprint of long ago.

This does bring us to the cellar and what it was once used for. Those sentenced to death by hanging were hung at Baile Hall. The dead criminals were taken to the Golden Fleece where they were left in the cellar. They would remain there until their bodies were claimed by their relatives. This probably has left its mark on the building as well!

At the beginning of this year, the Golden Fleece made it in the newspapers because the skull of Elizabeth Johnson was stolen from the pub. Elizabeth Johnson had been sentenced to death by hanging on August 23, 1800. She was found guilty for intending to fraud the Bank of England with a forged £ 1,- bank note. Luckily, the person who took the skull returned it a few weeks later. Elizabeth is back in her wooden box again. Another (fake) skeleton named Saul also took up residence in The Golden Fleece. You see, you never know who you run into there but it’s a great place to stay!