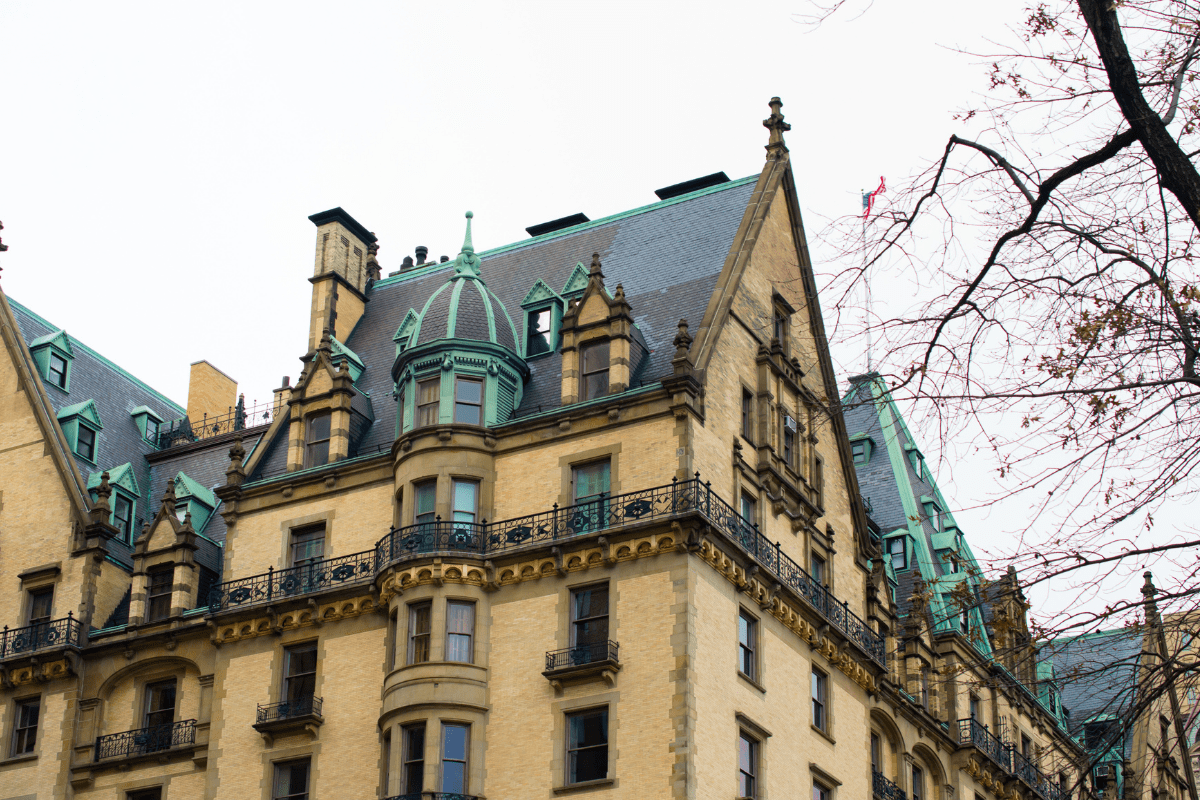 The Dakota Apartments, or The Dakota for short, is a striking New York apartment building. It’s located on the northwest corner of 72nd Street in the Upper West Side of Manhattan. The Dakota was the first apartment complex built for the upper class of New York and many famous residents have lived here. But, did you also know it is haunted?

The History of The Dakota

The Upper West Side of New York was largely undeveloped when Edward Cabot Clark decided to build his apartment building here. Clark was the head of the Singer Manufacturing Company and he hired architect Henry Janeway Hardenbergh for his plans. Hardenbergh was also responsible for the famous Plaza Hotel and the Waldorf Astoria. Because of its remoteness the building was named The Dakota, after the remote and sparsely populated region that partly covered Nebraska, Minnesota and Idaho. The name “Dakota” was derived from the Dakota Indians, a branch of the Sioux tribe.

The construction of the building started October 1880, but wasn’t finished until October 1884. Poor Edward Cabot Clark died before The Dakota was even completed. All apartments were let even before the building was finished, but it was a long-term drain on the fortune of Clark and his heirs. No expense was spared: The Dakota had to be perfect.

Hardenbergh’s design of the Dakota does not really resemble a certain architectural style. People mostly refer to it as German Renaissance, but it also contains French features. The building itself is square and built around a large courtyard. It has a large arched entrance which was big enough for horse-drawn carriages to enter. Its pointy roofs and high gables are richly decorated. Inside, there originally were 16 apartments, some had 4 rooms, others had 20 rooms. No apartment was alike. The ceilings were up to 14 ft (4,3 m)!

The floors were inlaid with mahogany, oak and cherry. On the upper floors (the 10th floor) there was a gymnasium and a playroom, but these were later converted into apartments. The building also contained a central dining room where large dinner parties could be held. The central kitchen sent food to the apartments by using dumbwaiters. The apartments are accessible by the staircase and elevator. The Dakota also has a private garden, a tennis court and a croquet field.

The Dakota has always drawn creative and famous people. Through the years, it has had several notable residents. It’s not easy to get a spot in The Dakota. The board judges each application. Some requests have been declined, like the ones from Billy Joel, Antonio Banderas and Melanie Griffith. The board was even accused of only allowing people with money into the building. Notable residents who were lucky to get a place in The Dakota were Boris Karloff, Harlan Coben, Judy Garland, John Madden and of course John Lennon and Yoko Ono and their son Sean.

Mark David Chapman murdered John Lennon at the main entrance of The Dakota on December 8, 1980. Chapman was a music lover, but he was also mentally disturbed. He shot Lennon four times in the back and shoulder. Lennon died right there on the stairs.

The ghosts of The Dakota

Where people live, people die. And yes, The Dakota is haunted. Through the years there have been many reports of ghosts, and some of these spirits have been seen by multiple people. For instance, the spirit of Judy Holiday. When the actress died, her apartment was renovated. The men working at her apartment felt as if they were watched closely. I guess Judy wanted to keep an eye on things to make sure they were doing her former house right.

The ghost of John Lennon

When John Lennon was still alive, he saw a ghost at The Dakota. He referred to her as the “crying lady ghost”. He was killed shortly after he saw her. John Lennon haunts The Dakota as well. He was seen at the entrance of the building, where he was shot. A woman and a man saw him at the same time. They recognised Lennon immediately and there was a strange glow around him. They wanted to approach him, but didn’t because of a certain expression on his face. Yoko Ono also saw her late husband. She saw him sitting behind the piano in their apartment. He looked at her and said: “don’t be afraid, I am still with you”.

The ghost of the little girl

A little girl’s spirit also haunts the building. She is a regular visitor and many have seen her. She was seen at the lower floor windows, but on other floors as well. The girl wears period clothing, has blonde hair  and sometimes she’s bouncing a red ball. Most of the time she smiles and waves at people but she also speaks. Once she told a resident that it was her birthday.

The Dakota also houses a creepy ghost. This ghost was seen by workers and residents. It’s a male spirit with an adult body and the head of a young boy. He doesn’t speak, he just watches before he disappears.

The basement is haunted by a poltergeist. He moves items around, even heavy furniture. Some claim he is the spirit of Edward Cabot Clark because he wears a wig, has a short beard, a long nose and wire glasses. Clark never lived in The Dakota. Perhaps that’s why he haunts it: it was his dream in the first place.

Unfortunately, The Dakota is a private building. Only residents are allowed in. There’s a doorman at the entrance. The Dakota was featured in several movies like Rosemary’s Baby (1968) and The Killing of John Lennon (2006). The building was also named in Jack Finney’s 1970 novel “Time and Again”, in which The Dakota enables time travel.