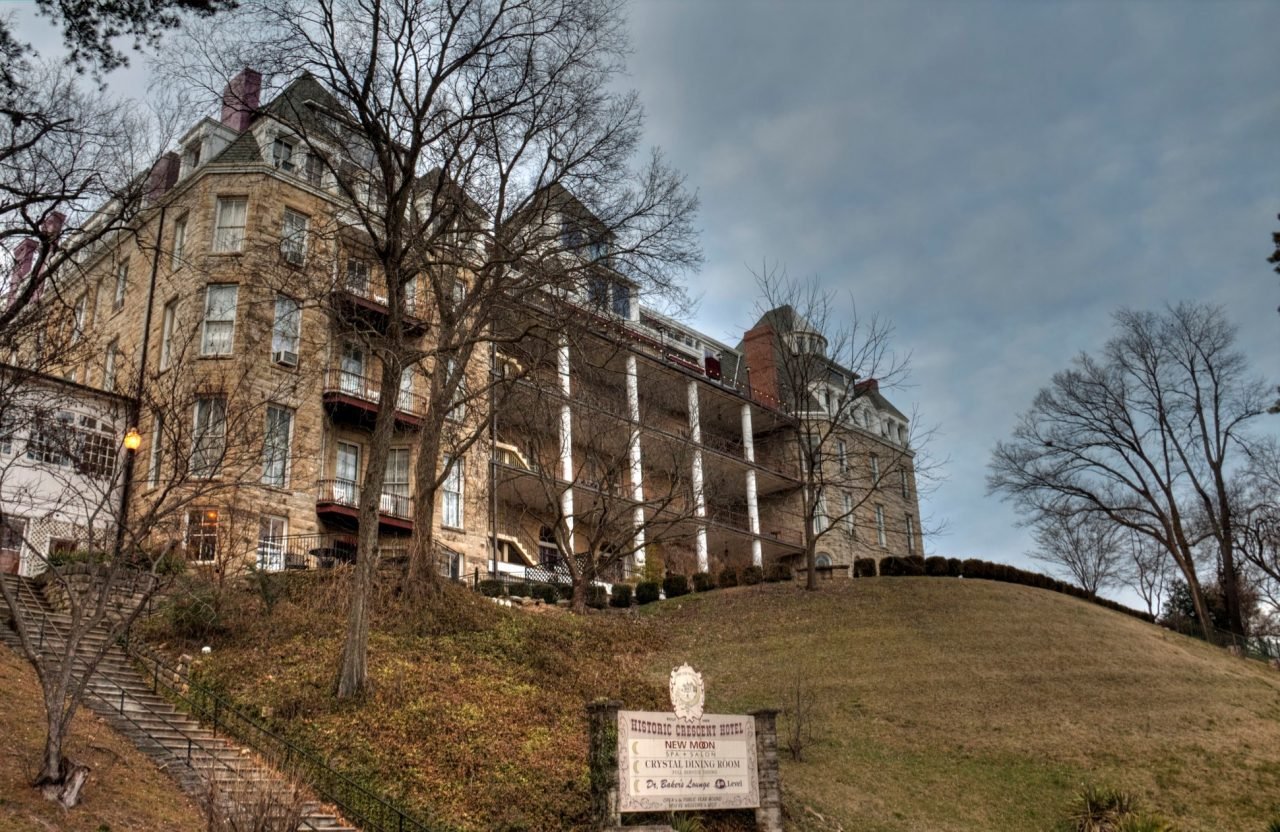 The beautiful historical Crescent Hotel can be found in Eureka Springs, Arkansas. Originally, this luxurious resort was meant for rich and famous America, but things didn’t work out as planned. That’s why it was used for other purposes like a sanatorium for cancer patients. Some of the former guests and patients never left and give today’s guests a night they’ll never forget.

The history of the Crescent Hotel

The plan of building a luxurious resort was a good idea, but in practice, nobody really needed it. It did provide work for many construction workers, electricians and plumbers. Even sculptors from Ireland were hired to give detail to the building. Eventually the costs to construct the resort were $ 249.000,-, which was an enormous amount of money back then. But, shortly after it opened, in 1886, the resort got into financial trouble, and it had to be closed again. It was empty for quite some time until it was re-opened in 1908. This time as a conservatory for young women. In the following years it was turned into a university and a summer hotel. And in 1937, a new owner came to town.

Norman G. Baker, a self-proclaimed healer, turned the resort into a sanatorium for cancer patients. Radio celebrity Baker claimed he was a doctor, although he had never set foot in medical school. He claimed he could cure cancer. All what was needed was the super healthy mineral water from the Ozark Mountains and, of course, a big purse. A few years later his deceit came to light and he was sentenced to jail for fraud and scam. So, the building stood vacant again until 1946. The new owners turned it into a hotel, which it still is today. In 1997 the hotel was completely renovated.

The sky is the limit

When it was first built, the Crescent Hotel had 78 rooms, an enormous dining hall where 500 people could eat at the same time, there was a relaxing Spa and a huge stable which could house up to 100 horses. Sadly, the mineral water didn’t seem to have the healing power people wished for, so less and less visitors came. After the re-opening in 1946, things started to look better. But in 1976, the entire fourth floor of the south wing burned down. The renovation of this tragedy and the construction of “The New Moon Spa”, cost over $ 5.000.000,-!

New guests and a couple of ghosts

Nowadays, the Crescent Hotel is a popular holiday location. Business is going well and guests love the place. But sometimes, there are some complaints. Complaints about strange things that happen to guests during their stay. Oh yeah, it’s haunted alright.

The ghost of Michael

A ghost who frequently shows up is the ghost of a red-haired Irish mason named “Michael”. This twenty-year old stonemason lost his balance while working on the roof in 1885. He crashed into the second-floor roof and was killed instantly. On this exact spot, room 218 is now located. This room is very haunted, and Michael is often seen. The staff has completely accepted this young bad boy, because he loves playing tricks on people. He likes messing with the lights and the room’s television. He also enjoys scaring people by banging the walls. Several guests claim they’ve seen a pair of hands coming out of the bathroom mirror. Yikes!

Sometimes screams followed by a loud bang are heard on the roof, as if someone falls from a considerable height. He also likes to shake people in the middle of the night. One employee once ran out of the room in terror because, out of nowhere, blood spatter appeared all over the wall. Michael is also notorious for playing tricks on housekeeping. One cleaning lady wanted to continue her job, but Michael held back the cart. She got angry with him and yelled that he should leave the cart alone. Michael eventually released the cart so she could move on to the next room. He sure sounds like a lot of fun. I guess he was a bad boy when he was still alive.

Ghosts from the sanatorium

After 11 P.M., the ghost of a nurse often is seen on the third floor. She pushes an old, squeaking hospital bed through the hallways. She disappears at the end of it. Eleven P.M. was the time for medical staff to transport deceased cancer patients. They made sure everyone was in bed, so the other patients didn’t get upset. On this floor the morgue was located as well as an enormous walk-in freezer where the deceased were kept. Some guests say they hear the squeaking bed, but they don’t see the nurse. Creepy fact: the walk-in freezer and the autopsy table are still in the hotel. You can also find the laundry room here and sometimes all the machines start washing on their own accord in the middle of the night.

The ghost of Dr. Baker

Doctor Baker himself is seen coming out of the operating theatre in the basement and on the first-floor stairs. He’s dressed in white and looks very confused. Even though he did not die at the hotel, he does haunt it. People identified the doctor by old photographs. An antique telephone switchboard hung on the wall by the entrance for a long time. It showed someone had called from the basement every day, even though the switchboards had been disconnected for years. Patients were “cured” in the basement using the mineral water there. The spirit of “Theodora” messes with the cleaning ladies in room 419. She tells them she’s a cancer patient before she disappears.

That the hotel used to be a luxurious resort for the rich and famous can be traced back to the ghost sightings. Many people claim to have seen a gentleman down the lobby dressed in Victorian clothes. He looks very wealthy and has a trimmed moustache and beard. He dislikes the living, even though he looks very much alive himself. He sits in the lobby and watches everybody with slight condescension before disappearing again. He has also been seen in room 218 where he tends to look at guests with a disgusted expression on his face. The Chrystal Dining Room was used for parties. Ghosts love to party, so it can get really crowded in there. Many claim to have seen a group of Victorian dancers who danced like they were full of life.

A well-mannered man is often seen sitting at a table near the Dining Room window. If you go over, he’ll say: “I saw the most beautiful woman here last night and I am waiting for her to return”. There’s also an enormous mirror in this room. A waitress once saw a Victorian bride and groom in this mirror. When she made eye contact with them, they disappeared. All ghosts at the Dining Room are very cheerful and they like a joke or two. At Christmas time, all the presents under the tree disappeared and were found back in another room. All the chairs were placed facing the tree as well. They also scattered all the menus around one day. A young boy has been seen in the kitchen near the Dining Room and sometimes pots and pans fly off the hooks there.

But there are more ghosts at the hotel. A Crescent Conservatory student (1908 – 1924) jumped to her death from one of the balconies. People can still hear her screams. People complain feeling dizzy and getting an earache when they use the stairs leading from the third to the fourth floor. According to the stories, a 5-year-old boy fell off the stairs being dizzy and confused because of a bad ear infection. He didn’t survive the fall. In room 424 a male spirit nearly gave a young couple a double heart attack because he floated through the bathroom wall, where they were at. In several hallways a waiter carrying a dish is seen and a playing girl is often seen near the stairwell.

The Crescent Hotel is one of the most popular hotels in the south of America. It’s a much-loved wedding venue and a perfect place to stay when travelling this mighty country. You can even look around without having a reservation to see if the legends are true about this hotel. It’s on my bucket list for sure!