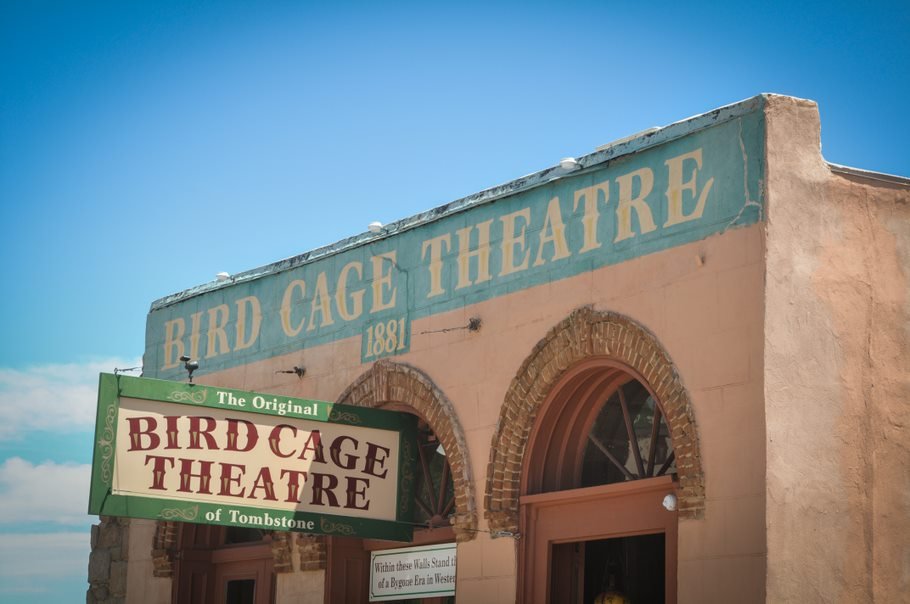 Let’s go back to the Wild Wild West, where gunfights were more regular than excepional, where men gambled away their last money and where prostitutes hoped for a better life. We’re in Tombstone, Arizona and it’s the year 1881. The silver fever is at its peak and the miners long for some entertainment after a hard day of labor in the underground mines. Welcome to the Bird Cage Theatre.

The history of the Bird Cage Theatre

The Bird Cage Theatre was also the site of the longest poker marathon ever held. This marathon lasted from 1881 to 1889! During these eight years, five months and three days poker was continuously played. The theater was open 24 hours a day during this entire time. About $ 10,000,000,- was wasted, 10% of which went to the theater itself. During the game, tempers often ran high. There are no fewer than 148 (!) bullet holes in the walls of the theater. As a result, it gained the reputation of the wildest and most deranged theater between New Orleans and San Francisco.

Gambling wasn’t the only thing people could do at the theater. Performances were given on a daily basis in the Great Hall where the stage was at. One of the first performances was given by Mademoiselle De Granville, better known as the Female Hercules with the Iron Jaw. Her shows included lifting heavy objects with her teeth. In addition to singers, comic duos and dancers, there was the show called “The Human Fly”. Women dressed in tight black clothing walked up the walls of the Great Hall. These performances were eventually canceled when one of the props came loose high in the air, causing one of the performers to fall to her death on stage, right in front of the audience.

The downfall and rebirth of the Bird Cage Theatre

After Lotti and Bill sold the theater to Joe Bignon, late 1885, the theater was renamed the “Elite Theatre”. Bignon was a true entertainer himself and his wife, Big Minni, also performed. Big Minnie, 5’6″ (1,80 m) and 220 pounds (100 kg) sang, danced and played the piano in her pink underwear. In addition, Big Minni was also a whore madam and even a bouncer. In 1886, the price of silver plummeted and the mines at Tombstone were ravaged by underground floods and fires.

All these tragic events left many miners jobless and, due to a lack of business, the theater had to close its doors in 1892. When it was reopened in 1934, the new owners were pleasantly surprised to see that nothing had changed. Even the painting of belly dancer Fatima still hung behind the bar, albeit with six bullet holes and a knife stab in it. Since then, the Bird Cage Theatre has been a tourist attraction.

The ghosts of the Birdcage Theatre

At least 26 people lost their lives at the theatre due to tragic falls during the shows, or heated discussions, accompanied by shootings, while playing poker. Also, a number of prostitutes committed suicide out of sheer desperation. Many of the people who have died inside the theater still haunt the theater today. And the new owners love that. It’s often just a feeling that creeps up on you or a strange scent that is smelled, but there are also manifestations.

Haunted areas in the Birdcage Theatre

The Great Hall is the most haunted area of the theater. The smells of cigar smoke and whiskey are most regular here. Visitors have also claimed hearing someone singing, even though there was no one performing on stage. There are claims of people hearing disembodied laughing, talking, the sound of a rolling dice and the sounds of cards being shuffled. Strange noises are coming from the balconies as well. A heavy feeling of despair is felt in certain areas as well. Apparitions in old-fashioned clothing have been seen partying in the Great Hall. A ghostly stage assistant just continues his work, even though he’s been dead for many years. He is often seen on stage wearing black and white striped pants, holding a clipboard in his hands.

Objects have the tendency to disappear and reappear again. For example, a $ 100,- poker chip was once found on the poker table in the basement. The current owners put it in a safe for further investigation, but when the expert showed up the next day, the chip was gone. The chip later reappeared in the top drawer of a desk. In the wine cellar, the ghost of a woman in old-fashioned clothes is often seen as well as a desperate man. He seems sad and confused and he seems to be looking for someone.

Wyatt Earp and the Clanton family

Do you remember the Earp’s and the Clanton’s? Perhaps you should read the story about Big Nose Kate’s Saloon first. A life sized statue of cowboy Wyatt Earp has been put on one of the balconies. The statue was standing on another balcony at first, but had to be removed quickly. Later it was discovered that this particular balcony had belonged to the Clanton family. Well, it’s safe to say that the Clanton’s and the Earp’s didn’t really get along. So, when Wyatt Earp’s statue was on their balcony, strange things started happening. For instance, every morning over a six month period, the staff would find Wyatt Earp’s cowboy hat on the floor below. One day the statue was even completely turned around! Since Wyatt’s statue was relocated, the bullying has stopped.

The theater is open to the public. Everything inside is still original, so it really brings you back to the old Wild West. Perhaps you’ll even experience some paranormal activity. According to the current owners, the ghosts at the Birdcage Theatre don’t mean any harm. They just want to have a good time!