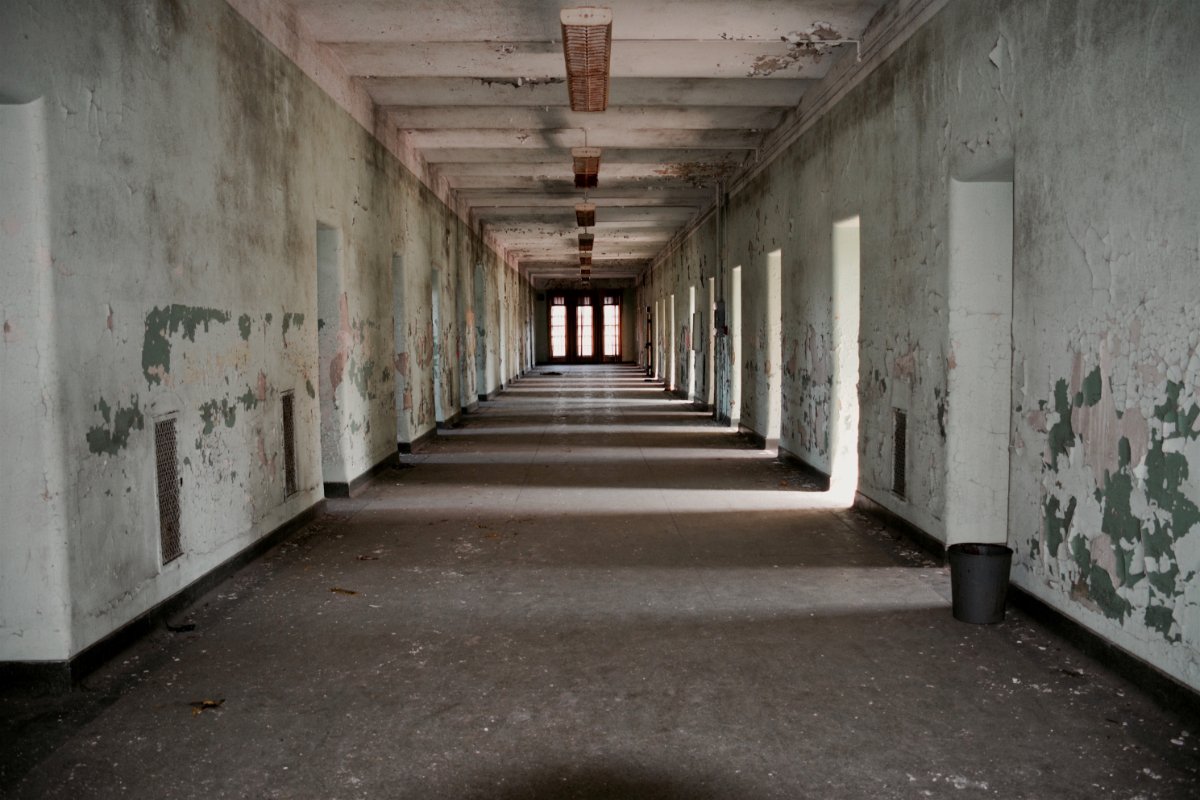 The Athens Lunatic Asylum “The Ridges”

In a city named Athens, in Ohio, you can find the former Athens Lunatic Asylum, which was built in 1868. Today, this huge building belongs to the Ohio University and offers space to the Kennedy Museum, an auditorium, an office, several classrooms, a storage facility and… a couple of ghosts. The students have gotten used to them, well, kind of.

The history of the Athens Lunatic Asylum

The first patient to be admitted to the asylum was a 14-year-old girl with epilepsy. Her parents thought she was possessed by a demon and therefore locked her away. From 1874 to 1993 this was a facility for people with all kinds of mental illnesses. People who were admitted were Civil War veterans, rebellious teenagers, homeless people, elderly people and even violent criminals. Also, tuberculosis patients were taken care of in the seven cottages which are part of this massive terrain. The asylum is about 4000 acres (400 ha) large, which can be compared to 800 soccer fields.

More and more buildings were added when the number of patients increased. When the building was abandoned, there were 78 buildings on the premises. The asylum wasn’t self-sufficient, even though it could have been. There were cattle, greenhouses, an orchard, a dairy farm, and the water came from self-dug wells. There are also three cemeteries on the premises, because where people live, people die. Today, the Athens Lunatic Asylum is named The Ridges. This name was chosen in name contest which was organized in 1984. Until then, it had at least 8 other names.

Dr. Thomas Kirkbride believed the keywords for mental patients were rest, cleanliness and regularity. Men and women were treated separately in their own wing and even had their own dining halls. The main building could house up to 572 patients, but that is double the amount Kirkbride would advise. At its peak, over 2,000 patients were being treated, which, of course, was unacceptable according to the method. The asylum created a lot of employment for people living in the surrounding area, but this medical staff was often unskilled.

This made procedures such as the much-feared lobotomy treatments risky. During these treatments, a thick needle was drilled into the patient’s skull, into the brain, through a spot right above the eye. Apart from the fact that a wrong lobotomy could lead to death, it could also lead to a condition in which the patient would be locked inside their own body forever. Another feared treatment, called hydrotherapy, was performed daily. During this treatment, the patient would be bathed in extremely cold or extremely hot water. And last but not least there was the electroshock therapy method, in which a patient was exposed to a highly dosed power surge which caused the body to convulse. Sometimes these convulsions were so intense, that even bones would break.

Reasons for patients to be admitted

Back then, there was an enormous list which was used as a manual for admitting people at an asylum. Things like the menopause, menstruation issues, alcohol abuse, epilepsy and even asthma were “illnesses” that were to be treated in an asylum back in the days. It’s hard to imagine, isn’t it? But the main reason people were admitted to the asylum was… masturbation. And this is no joke. When a family member was admitted, all contact was broken off. That was best for the patient according to the Kirkbride Method. That is perhaps why some people (700 women and 959 men) who died during their stay at the asylum were buried on the premises with only a number on the headstone.

A total of 1930 people were buried at the asylum’s cemeteries. Some patients were claimed by family members after they died and buried elsewhere, but most family members were ashamed of the fact there was mental illness in the family. They didn’t want anything to do with that person anymore. From 1943, headstones were given names and data. Unclear is what caused the change because before that, only a number was given. Over 80 Civil War veterans are buried there as well. They were eventually honored in 2000 by the NAMI: The National Alliance of Mental Illness. They organize an annual memorial for these soldiers. The cemeteries are now under the maintenance of the Ohio Department of Mental Health.

Almost all buildings have been renovated when the Ohio University moved in. All, except for “Cottage B”, one of the 7 cottages used for patients with tuberculosis. The walls and ceiling of this particular cottage were literally packed with asbestosis. This is ironic, knowing this cottage was used for people whose lungs were already very sick. The other cottages were renovated into campus for students who study at the university.

The Athens Lunatic Asylum hit the news at least twice, and not in a good way. The first time was in 1977, when multiple personality rapist Billy Milligam was admitted. He committed several felonies including armed robbery raping three Ohio State University students on campus. His attorneys claimed his other personalities committed the crimes without him even knowing it. A year later, on December 1, 1978, the Athens Lunatic Asylum was in the papers again, this time because patient Margaret Shilling had disappeared from her department.

They searched everywhere, except on the top floor of Building 20, where her decomposing corpse was found 42 days later by a caretaker. She was found naked, on her back, with her arms crossed over her chest. Prior to her death, she took off her clothes and neatly folded them and put them on a chair. According to the pathologist, Margaret died of natural causes. She had a cardiac arrest. Did she feel it coming? There are a lot of mysteries surrounding her death. When her body was taken away it left an impression on the concrete floor. Probably due to the decomposition in combination with the bright sun coming through the large windows. The stain Margaret left behind is impossible to clean, even up to this day.

Ghosts of the Athens Lunatic Asylum

Many people claim both the former asylum and the cemeteries are haunted. But there are more recent hauntings as well. The fact that part of the area used to be an Indian burial ground, makes it even more spooky. Some buildings are still vacant, so who knows what ghosts lurk there?

The main building is now called Lin Hall. Today it houses music, geology, biotechnology offices as well as the Kennedy Museum of Art. Strange figures have been seen roaming around the old floors. Others have heard disembodied voices, footsteps and screaming. Most appealing to the imagination is the basement. Some claim severely disabled patients were kept on chains in this dungeonlike place. Some say they’ve even heard chains being pulled.

There is no evidence that patients were ever chained to the walls here, but the arches in the basement sure look creepy. The ghost of Margaret Shilling has been seen looking out of the window from the place she was found, but she’s also been seen on other floors. Doors open and close by themselves and people hear footsteps when they are alone. People also “feel” the presence of others and shadow people are frequently seen. A man with a long, black coat creeps out students in the men’s room for years.

The cemeteries have been vandalized during the time the buildings were abandoned. Shadowy figures and strange lights have been seen here. In one area, the shapes of the graves form a perfect circle, which is rumored to be a witches’ meeting point.

Nearly all the buildings on the West Green are haunted. This is where the Indian burial grounds were located. Wilson Hall is no exception. This is the most haunted dormitory on the campus. This hall is also right in the middle of a pentagram formed by several cemeteries in the Athens region. Most hauntings occur on the fourth floor. Apparitions have been seen, voices have been heard and doors slam shut by themselves. A student committed suicide in a room on the fourth floor.

The Convocation Center, The Convo in short, is also located in the West Green area. This place is haunted by several ghosts, mostly in the dormitory part of the building. A Resident Assistant was supposedly killed by her boyfriend here, and she now roams the corridors. A student who died here in his sleep now tends to embrace other students while they are sleeping.

Washington Hall is in the East Green area and the dormitory is allegedly haunted by an entire basketball team of high school girls. They were killed in a bus accident after they visited the university. Students have reported hearing running feet and bouncing basketballs.

Today, the Athens Lunatic Asylum or The Ridges as what it is now called, is an operating campus. You cannot just visit it, but there are some tours that you can take. There’s the Asylum Tour provided by the Athens County Historical Society and Museum. This is not a ghost tour. They used to have ghost tours around Halloween, but they are very limited. Please note that you cannot explore the vacant buildings on your own. If you really want to experience the hauntings, there’s only one thing to do: go back to school!