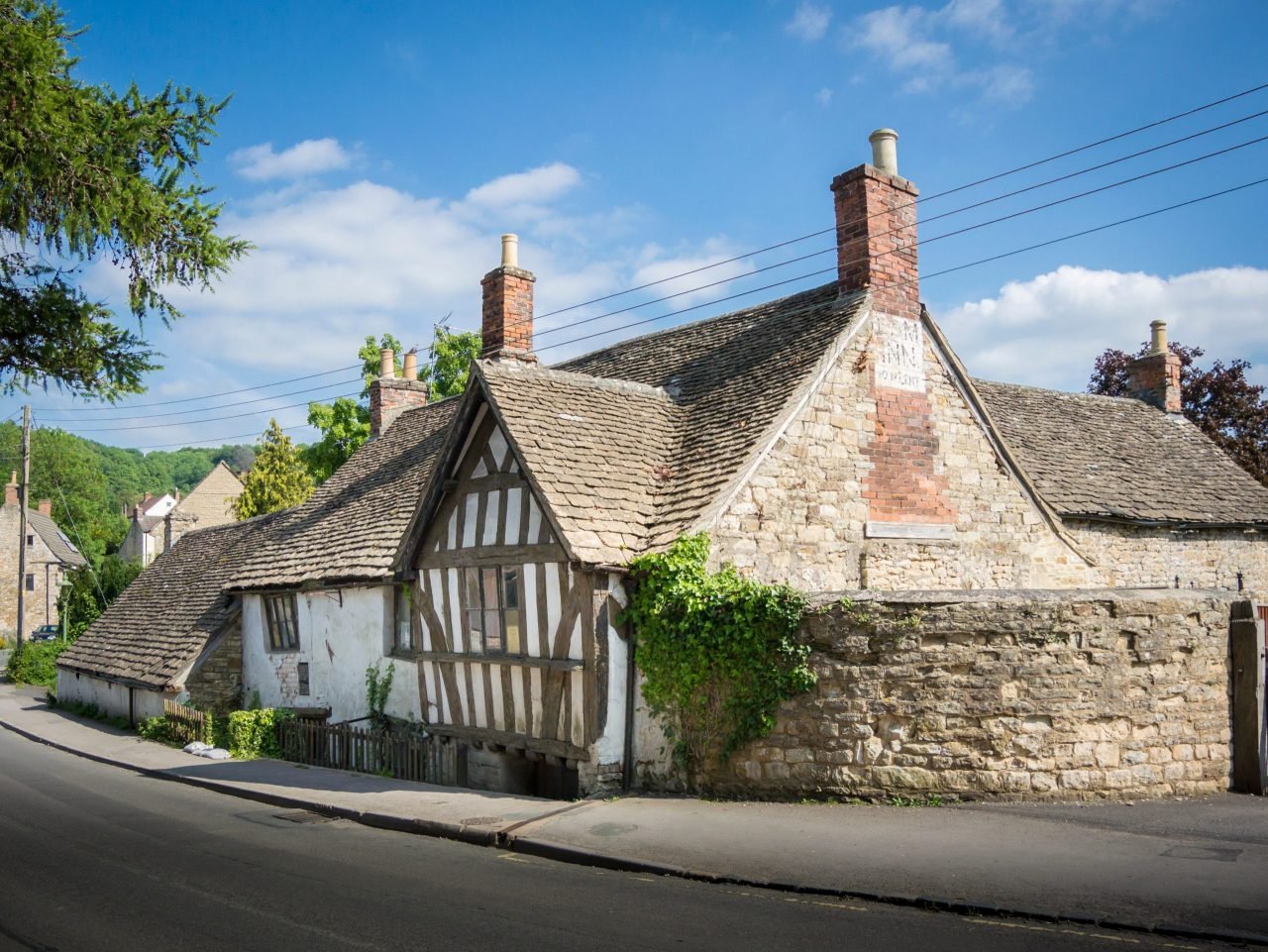 In the English county Gloucestershire, in the town Wotton-Under-Edge nearby Potter’s Pond, you’ll find an incredibly old inn. It used to be a pub, but in 1968 it was turned into a bed-and-breakfast by John Humphries, who died December 12, 2017 at the age of 89. The inn was his life, even though some of its supernatural residents didn’t mind him leaving…

The history of the Ram Inn

The Ancient Ram Inn was built in 1145 as a “keeping house” for slaves and workers who were constructing the local St. Mary’s Church. After they left, it became the home of a priest. It has had many different owners and functions ever since. From 1930 the house was privately owned. It was Maurice the Bathe who bought and restored it. The inn was sold to Mr. Humphries in 1968 for the sum of £ 2,600,-. Humphries dedicated his life restoring and preserving the inn.

First, let’s take a closer look at Gloucestershire. The Ram Inn is a haunted hotspot, but there are more places in this county where ghosts like to reside in.

The Woodchester Mansion and St. Briavels Castle are infested with ghosts as well. Coincidence? Perhaps, but there might be a connection between these three locations. Archaeologically seen, the Ancient Ram Inn lies in a very special spot. It is located directly on the crossroad of two Ley lines. A Ley line is a straight line that one can draw through several places of geological and spiritual importance. Like prehistoric burial grounds and mystical places like stone circles as well as ancient churches and cathedrals.

One of the ley lines that cross the Ancient Ram Inn, crosses the center of the Stonehenge. The other one can be traced through Glastonbury Tor. Ley lines are energy tracks. People say that the ancient energy of Stonehenge feeds the paranormal activity in the places on that line. And believe me, there’s a whole lot of paranormal stuff going on at the inn! And then there is the fact that the inn is built right on top of a 5000-year-old Pagan burial ground.

No longer suitable as bed-and-breakfast

Mr. Humphries has put his entire soul and bliss into his inn, nevertheless after a few years, the place was no longer suitable as a normal bed-and-breakfast. Simply because it had gotten far too dangerous. Only ghost hunters, mediums, and people who love the paranormal are willing to spend the night there. And you can for £ 25,- to £ 30,- a night. So, what makes staying at the inn so dangerous? Well, a truckload of angry spirits does.

Fortunately, not all the ghouls are evil at the Ancient Ram Inn. There are some good spirits, too! Like the spirit of a 15th century woman who was sentenced to death because she was accused of witchcraft. She tried to escape her destiny by taking refuge in a room at the inn. Unfortunately, she was discovered, and she was burned at the stake. She doesn’t mean any harm even though she doesn’t like to be called a witch. Her spirit still lingers in what today is called “The Witch’s Room”.

A black cat also haunts this room. It might have been the witch’s cat, but it might also be the 500-year-old mummified cat Mr. Humphries found inside a wall. Having a dead cat inside your wall was looked upon as a lucky charm. The ghost of a young girl is often seen behind this room’s window. She’s waving to everyone who sees her. Also, the spirits of former owners like hanging around in the sitting room.

During the renovation of the inn’s basement, Mr. Humphries accidentally dug up a grave with several child skeletons at the foot of the staircase. These children were probably the victims of ritual sacrifice. The broken knives were still inside their little bodies. That might also explain the sound of childlike crying throughout the entire inn. When stuffed animals were put all over the place, the crying became less, but it never completely vanished. Also, the spirit of a young girl by the name of Rosie has been seen floating through the hallways. Is this really the spirit of a child or is it something darker? The Pagan rituals might have opened a portal for dark energy, so be cautious.

Mr. Humphries himself has had some unpleasant encounters with his paranormal housemates. The very first night he stayed over, he was pulled from his bed by the arm by an unseen force. His bedroom was also terrorized by a poltergeist who kept banging on his window. The bed-dragging stopped when John Humphries placed an enormous wooden crucifix in his bedroom. The banging on the window never truly ceased, because that simply moved on to another room. His wife and daughter Caroline refused staying at the inn and they moved to another house, leaving John up there by himself. John never once thought about leaving the inn even though he was alone.

Not everyone likes antiques

Mr. Humphries loved putting antiques in his ancient inn, so when he found an antique painting of one pastor, John Wesley, he was really pleased. But when he tried hanging the painting in the stairwell all hell broke loose! Doors that had been closed for years swung open and slammed shut and there was banging on ALL the windows. His daughter’s dog didn’t even dare enter the stairwell when the painting was up. It’s unnecessary to say it didn’t hang there very long.

An Incubus and Succubus

To make things worse, there are also an Incubus and a Succubus at the inn. In fact, these demons were the reason why the inn was no longer fit as bed-and-breakfast. The Incubus is a male sex-demon who took advantage of female visitors. The Incubus feeds on female hormones while he crawls in bed with them! The Succubus is a similar demon, but female. She feeds on male hormones. Some people even jumped from the windows to escape these demons. John Humphries shared his room with the Incubus until his death.

The room of the Bishop

Warning signs and biblical passages seem to go hand in hand at the inn. The most haunted room is the Bishop’s Room on the first floor. No less than 9 entities reside here. A friendly ghost is that of a small Cavalier King Charles dog. It’s often seen in a corner of the room. The spirits of a dark monk, some bishops and nuns are also seen and ‘felt’. It is believed that Devil worship took place here. Some people claim to have been lifted by something unseen and thrown across the room.

The bed also tends to levitate. Often the screams of a man who dead because his head was pushed into the fireplace are heard. Also, the spirit of a young woman is seen. She appears from the ceiling. Upside down. Hanging by her legs. Which is quite disturbing. A Roman Centurion has appeared on horseback right through the walls of the Bishop’s Room completely terrifying two working plumbers.

The attic is haunted as well. Sounds of something heavy being dragged are heard from up there. Supposedly, a former owners’ daughter was murdered here by hanging about 500 years ago. Caroline Humphries used the Attic as her bedroom. You cannot go all the way to the back because of its unstable floor.

Even the kitchen is not a pleasant place. When an 18-year-old man entered this room during a ghost hunt he was forcefully thrown against the wall by an unseen force. This also happened to Mr. Humphries once. A young couple ran from the kitchen in utter panic when they saw the spirit of a woman come up from the kitchen floor. Later, a woman and her baby were found buried at the same spot. Behind the bar, that’s adjoined to the kitchen, another young woman is buried. She presented herself many times to Humphries’ daughter as Elizabeth. She told her she was murdered by a highwayman. The space between the roof was used as a hiding space by two highwaymen. Perhaps one of them murdered this poor woman.

The 18th century barn is haunted by a 7 ft (2 m) tall dark figure. He’s violent and aggressive towards men but favors a certain type of female. This dark shadow appears in the doorway of the barn as if it’s protecting something.

After John Humphries died in 2017, his daughter Caroline has taken over her father’s legacy. Ghost hunters and people interested in this very interesting place are welcome. Would you dare to spend the night?

A special thank you to Spooktacular Ghost Hunting Events UK LTD for the pictures!