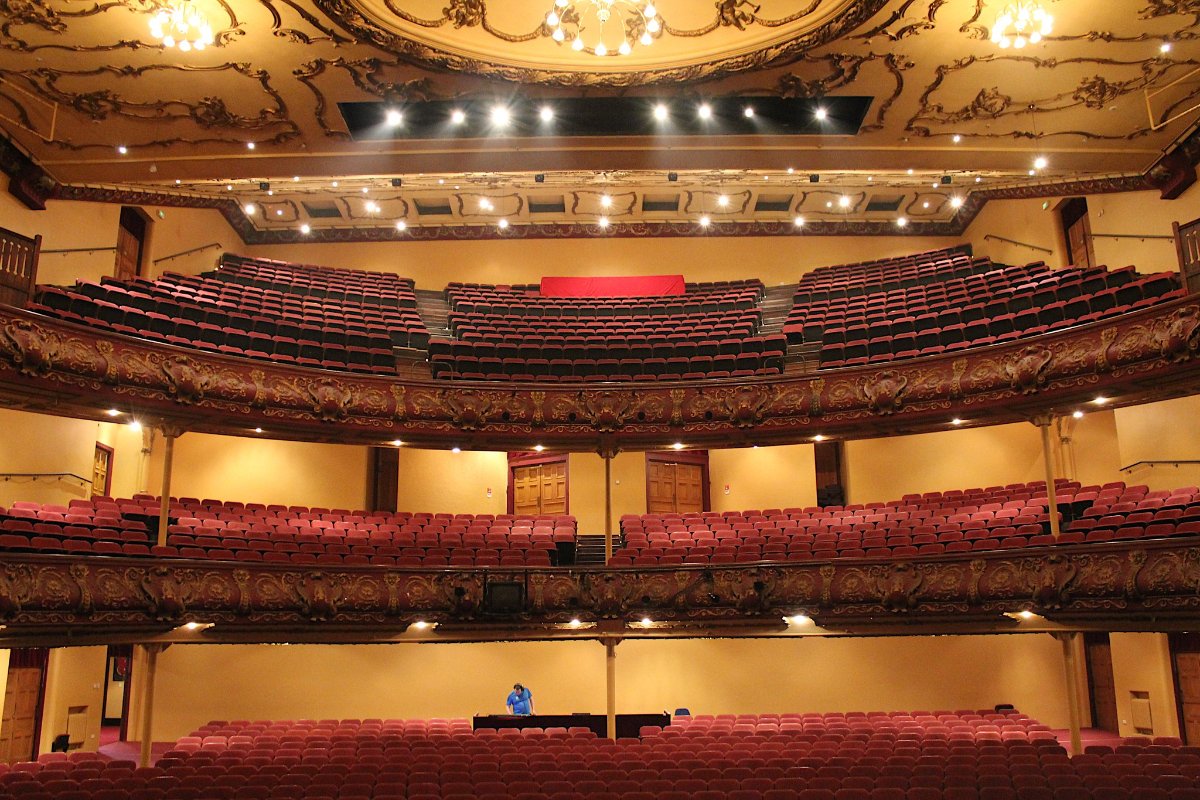 In New Zealand’s capitol Wellington, you’ll find a beautiful historic theatre: the St. James Theatre. The theatre’s long history is one of success and decline. It was nearly even demolished in the 80’s. Somehow the theatre manages to survive, even though it’s undergoing a huge renovation as we speak because the building was declared earthquake prone. How would the ghosts feel about that?

The history of the St. James Theatre

The St. James Theatre as we know it today, was opened on Boxing Day 1912. The theatre’s land used to belong to a church and a volunteer hall before being bought by the famous entertainer John Fuller in 1899. He turned the old hall into a theatre named “His Majesty’s Theatre” or simply “The Fuller”, until it was finally declared a fire hazard in 1911 and demolished. After this, Fuller vowed to build a new theatre and that it would be the best theatre in New Zealand. When the new theatre was opened in 1912, he renamed it the St. James Theatre. After Fuller’s death in 1923, the St, James had several owners. You may say the success of the theatre died along with Fuller. In 1930, the theatre was turned into a cinema, but it became a stage performance theatre again after WWII.

The decline of the St. James Theatre

In the 1970’s there was a lot of competition for the theatre. Gradually, the St. James fell into decline and at some point, it was even closed. It was sold to the Chase Corporation in 1985 and they asked for a demolition permit a year later. On May 7, 1987, the St. James Theatre played its final movie: “Wanted: Dead or Alive” for a small group. However, due to the efforts of an objecting group, the theatre was spared from being demolished and even restored in its former glory. That must have pleased the ghosts that haunt the theatre.

The ghosts of the St. James Theatre

The St. James Theatre is notoriously haunted. Some say this is caused by that fact that the former hall was built on top of a cemetery or burial ground, but there is no prove for that.

The ghost of Yuri

The most common and famous ghost of the theatre is the ghost of Yuri. Yuri is the spirit of a Russian performer who fell to his death from the theatre flies. He was killed instantly. There are even rumors Yuri was pushed by a female Russian performer named Pasha. Either way, Yuri is a friendly ghost who likes to play with the lights. He’s known for turning the lights back on when the cleaners just turned them off. Yuri also saved the life of a stage projectionist twice!

The man was looking for a light switch after the auditorium was in complete darkness and he was suddenly forcefully pushed backwards. When the lights were finally back on, he realized he would have fallen into the orchestra pit if he hadn’t been pushed. He was convinced it was Yuri that saved his life. Later, that same stage projectionist was on stage with his infant son on his arm. He suddenly heard a beam collapse right above his head. Again, he was pushed out of the way by an unseen force, and his baby son was “carried” through the air for about three meters. Both were fine!

Another ghost that people have encountered many times is that of the Wailing Woman. This ghost has been seen and heard throughout the entire theatre. She often wails and moans. According to the story, she used to be an actress who was ready to make her comeback. Unfortunately, she was booed off stage. She committed suicide by slitting her own wrists either at the theatre or at her own home. It is said that filmmaker Peter Jackson saw her. The Wailing Woman targets female actresses most of the time. Some have sprained their ankle on stage, one fell off a ladder without a reason and some actresses suddenly become hoarse on stage, unable to sing or perform. She’s kind of a jealous woman!

Other ghosts at the St. James Theatre

The American actor Stan Andrews is said to haunt the theatre. People say they can hear him wheezing in the backstage corridors. There’s also the ghost of a tall, thin man in his 30’s. He has been seen frequently as well. Perhaps the most impressive paranormal phenomena at the theatre is that of an entire boys’ choir. The choir had its final performance at the St. James Theatre during WWII before setting off on tour by boat. The boat never reached its destination, and the boys were never found. The staff hears them singing in the auditorium, but when they try to find the source of the sound, it moves to another location.

Today, the St. James Theatre is the home of the Royal New Zealand Ballet, although the building is still under construction. It’s being strengthened against earthquakes. I wonder if the ghosts miss the performers and the shows. Or perhaps they like it this way. What do you think?