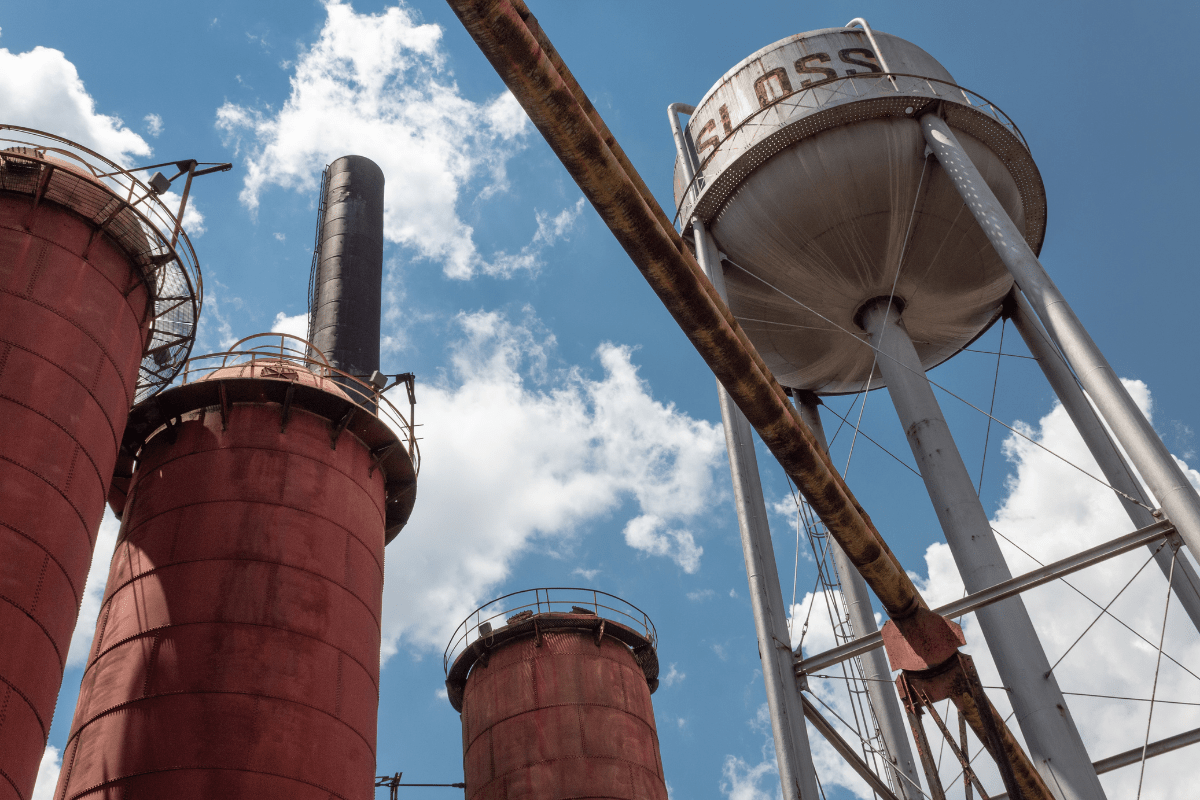 For some reason I’m into big machines, industrial places and abandoned buildings. So when I came across Sloss Furnaces during my research on haunted places, I just had to learn more about this place. I needed to write about these furnaces that have been the National Historical Face of the city of Birmingham, Alabama, since 1981.

The history of Sloss Furnaces

In 1880, Coronel James Sloss, one of the founders of Birmingham, decided to build some furnaces to create train tracks for his city. Almost 78.000 square mile (220.000m²) of land was given to him for his project. The construction was carried out by Harry Hargreaves, a recently graduated engineer. He built two types of Whitwell furnaces, each 59 feet (18 m) tall and 18 feet (5,4 m) in section. Whitwell had been his teacher. During the first year, the furnaces produced 24.000 tons of high quality iron.

In 1886, Sloss was sold to new investors that improved them even more. In 1927, a second Sloss Furnaces was built. Also, 48 tiny houses were built near the furnaces to house the manly black employees. These employees were former slaves and they needed a job. And believe me, you did have to be very desperate to want a job like this.

The downfall of the furnaces

In the 50’s and 60’s, environment and public health became more and more important. Measurements showed these furnaces caused an enormous amount of pollution. The oldest furnaces had to be closed. In 1971, Sloss furnaces were all closed for good, and donated to the State of Alabama. The State decided to use the furnaces for industrial purposes and to house a museum in it. It also became a workplace for artists who worked with iron and concerts and festivals are held on the premises. You can even get married here! But when the sun sets the echoes of the past are brought to life here.

Working in the furnaces was like working in Hell itself. Especially in the Summer, the temperatures could rise up to 120°F (49°C). The visibility was poor and the workers worked for 12 hours on end. The money the workers earned was nothing compared to the dangers the men had to face on a daily basis. And the work pressure was inhumane. Especially nightshift chief James “scum” Wormwood, was an awful person.

He made his men take terrible risks. Under his command, 47 men lost their lives and many got injured so bad they couldn’t work anymore. During an explosion in 1888, 6 of his men lost their eyesight. No other chief knew such “records” and you can imagine he wasn’t much loved. When he fell into a bath full of melted iron from the top of the highest furnace named Big Alice in October 1906, people claimed he had been pushed. But, James Wormwood’s death was documented as a tragic accident.

Wormwood wasn’t the only one who lost his life in the piping hot, liquid iron. At least three more men died the same way. Two of them tried to cut loose a piece of ore because it jammed the machine. Boiling hot steam was sprayed from the countless pipes which would boil you alive if you’d stand in the wrong path. Carbon Monoxide was a sneaky and invisable killer which lingered everywhere. One of the most horrible accidents happened when one of the workers tried to eat his lunch next to a rotating gear. He came a bit too close and his clothes got stuck in the gear. He was crushed to death in front of his co-workers.

People claim Wormwood’s ghost still roams the furnaces. Many workers claim they have been pushed near the iron baths while nobody was around. At night, the words “go back to work” are heard. The most creepy thing happened in 1971, on the verge of the closing of the furnaces. Nightshift chief Samuel Blumenthal, made one last sentimental round in the furnaces when suddenly he was face-to-face with a monster!

On his deathbed he declared the monster was half human, half demon. The monster tried pushing him towards Big Alice’s stairs, but Blumenthal refused to be pushed. He started fighting the monster with his bare fists. When he was found, he was covered in third degree burns, even though the ovens were out. He died a couple of days after his encounter with this monster.

Sloss Furnaces has been a much loved place for ghost hunters. Kevan Walden was hit in the face by an unseen force while investigating the tunnels on his own. The handprint was visible for a long time and Walden got the scare of his life in there. But he later said it was “cool” as well. Zak, Aaron and Nick, from Ghost Adventures (Discovery +), also experienced some creepy stuff. Aaron was stung in his eye, probably by the same ghost who smacked Walden and Zak and Nick heard footsteps. A ghost was seen wearing a blue overall. The workers used to wear these. Would you dare to go here at night

Do you want to read about more haunted places in America? Click here!