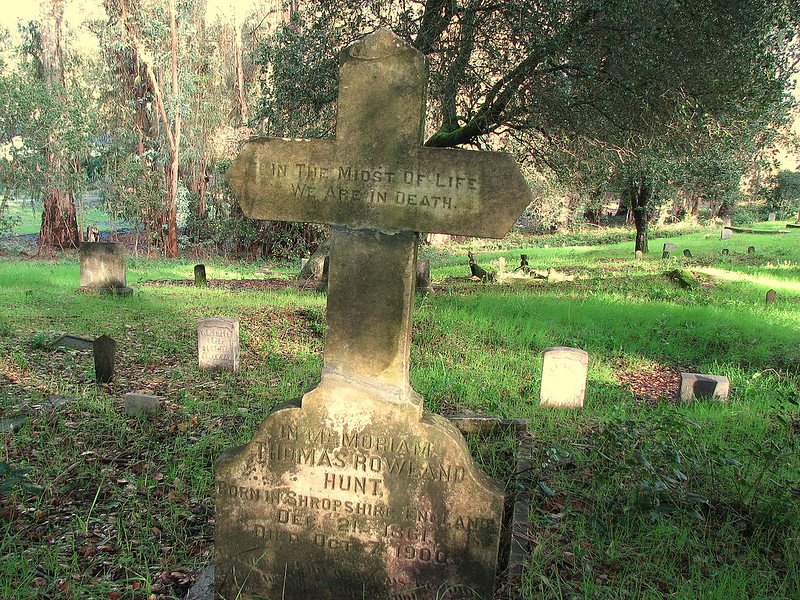 In Santa Rosa, California, you can find the Santa Rosa Rural Cemetery. At some point in history, the cemetery fell into decay. A group of volunteers decided to restore it and now organizes guided tours at the cemetery. It’s wonderful to hear about the interesting history of the cemetery, and there is a chance you’ll meet a ghost!

Santa Rosa Rural Cemetery was established in 1854, when a young father from Missouri drowned in a pond in Santa Rosa. The man was buried on land which belonged to Dona Maria Ignacia Lopez de Carrillo, one of Santa Rosa’s earliest settlers. In 1867, the land became an official burial ground.

By 1930, parts of the original land were sold and three additional cemeteries were established nearby. They were Stanley Cemetery, Moke Cemetery and Fulkerson Cemetery. All these cemeteries now form the Santa Rosa Rural Cemetery complex. Today, around 5,000 people are buried here and the cemetery is listed on the California Historical Landmarks Register.

Decay of the cemetery

Unfortunately, the cemetery complex was once forgotten and neglected. Due to a lack of maintenance and vandalism, most headstones were broken and overgrown. In 1994, a group of volunteers decided to restore the Santa Rosa Rural Cemetery. This volunteer committee is still very active today. They even provide guided tours. There’s so much history in the place that needs to be shared.

Take the Memorial of the 1906 Earthquake, for instance. Seventy-five victims of the earthquake were buried here. Also, dr. Annabel McGauhey-Stuart was laid to rest here in 1914. She was a doctor during the Civil War and became Santa Rosa’s first female doctor. The Fujimoto Tombstone honors all Asian residents of Santa Rosa. For instance: Chinese residents were barred from burials here, so they were given a spot to remember them.

The ghosts of the Santa Rosa Rural Cemetery

According to many, the cemetery is a very haunted place. Volunteers and visitors have paranormal encounters to share. Some of the Santa Rosa Rural Cemetery ghosts have been identified! Let’s take a look at who haunts this historical cemetery.

The 29-year-old Sarah Geneva “Neva” Duffin died under mysterious circumstances. The woman was admitted to Burke’s Sanatorium. Even though her illness wasn’t life-threatening, she passed away. Several months later, the head of the sanatorium, Mr. Burke, was arrested for causing the death of his mistress. He was accused of dressing her injuries with arsenic bandages after a dynamite incident. Was he also responsible for Neva’s death? Her ghost now taps people on the shoulder in the Stanley section of the cemetery. I wonder why she tries to get people’s attention. Does she want to tell them something about her death?

A long time ago, there was a tree on the cemetery where once three man were lynched. These three outlaws had shot Sheriff Jim Petray and two San Francisco detectives. The three outlaws were taken from jail by an angry mob and they were hanged in the tree. Today, on full moon nights, the bodies of the three hanging men can be seen on the site where the original tree once stood. This hanging tree was located on the cemetery near Franklin Ave.

The best-known ghost of the Santa Rosa Rural Cemetery, is the ghost of Mr. Lemmon. Allen Bosley Lemmon died of cerebral thrombosis on May 11, 1919. He was aged 71. The retired newspaperman has been seen by many. There’s even a photograph of the ghost. It shows a fog-like shadow of a tall man near Mr. Lemmon’s gravesite. mr. Lemmon is a very friendly spirit. If you want to meet him, you’d have to hang around the pillars at the McDonald Ave entrance.

As mentioned before, the Santa Rosa Rural Cemetery is open to the public. Tours are provided by enthusiastic volunteers who love to share the cemeteries’ stories with you. And there is a chance you’ll meet some of the resident ghosts!

Do you want to read more ghost stories about places in America? Click here!