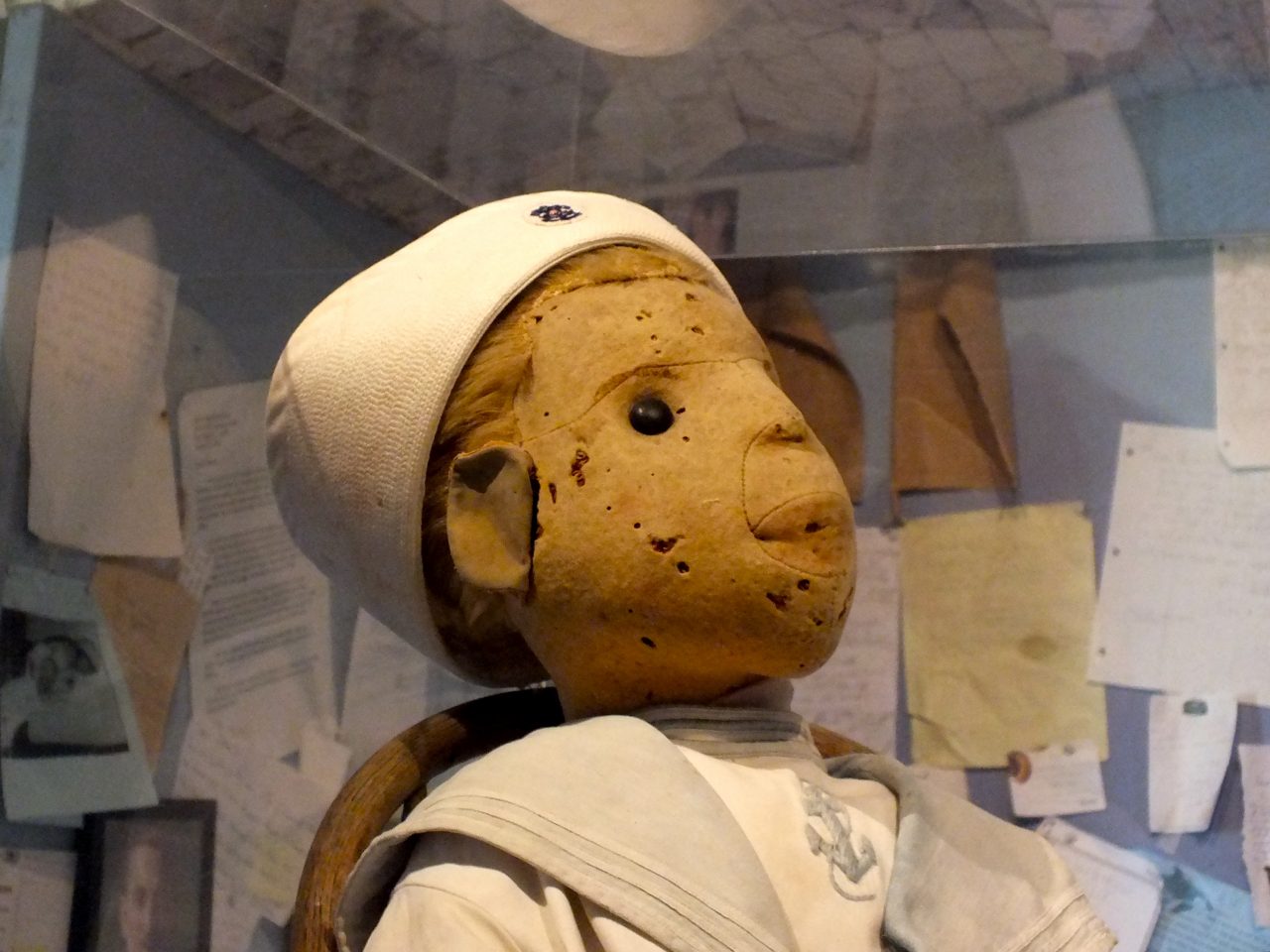 Robert is the name of an antique doll which is allegedly haunted. The doll used to belong to an artist named Robert Eugene “Gene” Otto, who was given the doll when he was a young boy. Currently, the doll is exhibited at the East Martello Museum in Florida. Want to take a picture? Make sure to ask the doll for permission first or things could get ugly.

Robert the Doll was manufactured by the Steiff Company in Germany somewhere around 1900. Gene’s grandfather bought it in 1904 while on a trip to Germany and he gave the doll to young Gene as a birthday present. The doll is wearing a sailor’s suit, something similar to what the boy would have worn when he was a child. It was normal to dress a doll in the same way as the owner back in the days.

The Otto family lived at 534 Eaton Street in Key West, in a nice house in Queen Anne style known as “The Artist House“. The house was built by Thomas Otto in 1887 and currently serves as a bed and breakfast. It didn’t take long before the first strange occurences started happening in the house. These occurences started off small with mischief which was blamed on Gene. Gene started blaming Robert the Doll, but of course, nobody believed the boy. At first.

As Gene grew older, more strange things started happening. One day, Gene’s mother found one room completely trashed and people would see a small figure pasing in front of the window when the Otto’s were out. The family had already embraced the fact the doll was haunted and soon all the bad luck and mishap was blamed on the doll. “Robert did it” was a common phrase inside the Otto home.

Haunted doll in the turret

While Gene studied arts in New York and Paris, the doll remained at 534 Eaton Street. Robert the Doll was even given his own room, up in the turret where he stayed with his little teddy bear to keep him company. Gene married Anne and they moved into Gene’s parental house. Gene died in 1974 and his wife Anne two years later. After their deaths, the house and the doll were sold to Myrtle Reuter, who owned the house for another 20 years. The current owners turned the house into a bed and breakfast and donated Robert the Doll to the East Martello Museum in 1994. The doll immediately became a very popular tourist attraction.

Innocent doll or demon in disguise?

Robert the Doll is said to be aware of its surroundings. It has supernatural abilities that allow him to move, change its facial features and even make giggling sounds. Camera’s have been said to have broken because people didn’t ask Robert the Doll for permission to take a picture. You can write him a note. You will find those notes back in the room where the doll is on display. The doll is now sitting in a glass container, but that doesn’t mean it’s harmless.

According to the legend, Robert has caused car accidents, broken bones, job loss, divorce and other misfortune. People say the doll’s supernatural powers were triggered when young Gene blamed everything that happened in and around the house on the doll. You will now think twice before blaming your dolls, won’t you?