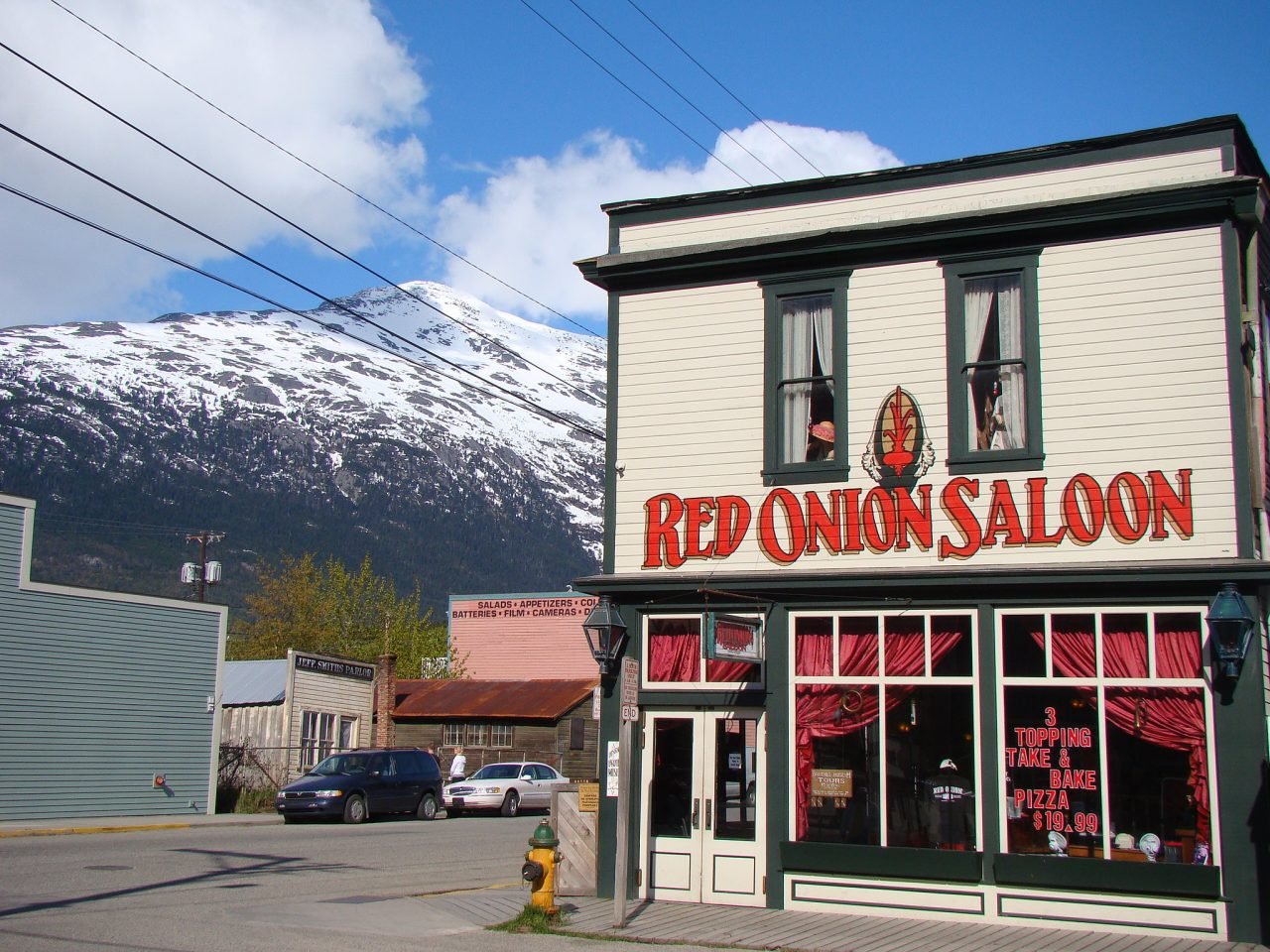 The Red Onion Saloon is a historic saloon and brothel museum in Skagway, Alaska. After the gold rush, the building served many purposes, but the upstairs brothel rooms were never touched. Today, the staff dresses up as working girls from the late 1900’s, serving food, drinks and offering tours. But, some people from the past never left.

The history of the Red Onion Saloon

The Red Onion Saloon was built during the height of the Klondike Gold Rush in 1897. It opened as a brothel in 1898, to serve lonely miners who could use a little female companionship after hard day’s labour. Captain William Moore, the founder of Skagway, personally cut the planks for the brothel. The rooms for the working girls were upstairs. There were 10 small rooms (cribs) in total and each room had several doors in case a quick exit was necessary.

The brothel had an interesting way of showing if a girl was available for work or not. They used 10 dolls which resembled the 10 prostitutes. If a customer picked out a girl, the doll resembling her was laid down. This meant that the girl was unavailable. If the job had been done, the doll was seated upright again.

The Red Onion Saloon has served many purposes through the years. It served as a popular dance hall, but it also served as an army barracks, a bakery, a laundry shop, a union hall, a gift shop and even a television station. Today the historic saloon operates as a saloon again and a brothel museum. The rooms upstairs are pretty much the same as they were back in the days. This means that it’s full of trigger objects. Like the silver dress which was found under the floorboards. These objects could attract ghosts from the past. Which is exactly what’s going on in the Red Onion Saloon.

The ghosts of the Red Onion Saloon

There are at least three entities at the Red Onion Saloon. Two women and a malevolent male spirit. The identity of the two women has been established, but it’s  not clear who the male entity was. The unknown male is not a friendly spirit. He brushes roughly past employees and guests. And he tends to move certain objects the staff needs to do their jobs. Keys and expensive drinks tend to disappear and later reappear in strange places.

The ghost of Diamond Lil

Diamond Lil is a former madam who doesn’t feel like moving on. She still keeps an eye on the Red Onion Saloon and its staff. She makes herself known to male guests only. They claim they feel hands on their legs and hear soft whispers in their ears.

The ghost of Lydia

Lydia is believed to be one of the former prostitutes that once worked at the Red Onion Saloon. Lydia has been seen wearing a long, dark dress. She’s quite hostile towards men. Some claim Lydia took her own life at the Red Onion Saloon after discovering she had a venereal disease, but there’s no evidence she died there. The smell of her perfume sometimes lingers in certain cold spots. Once, there was a great disturbance on the upper floor. The police were even called to check up on it. When they approached the stairs they saw a female figure running down the hall in the direction of the room which once belonged to Diamond Lil. Lydia was most likely seeking protection with her madam.

Today, the Red Onion Saloon still serves good food, drinks and tours. The staff is dressed in period clothes which will take you back in time. You can take one of the longer tours, but you can also go with a “quickie”: a 15 minute tour through the museum. The Red Onion Saloon is open for the public from mid April until late September. It’s certainly worth your time!