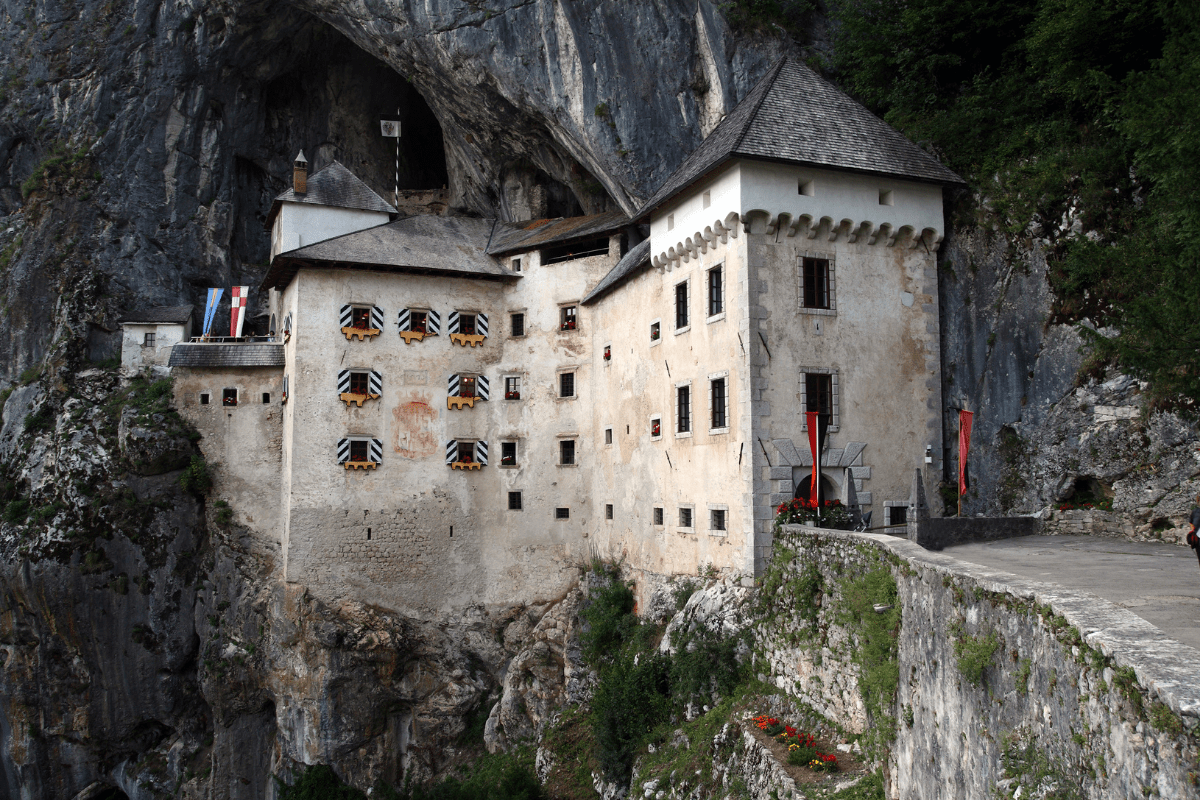 Predjama Castle (Slovenian: Predjama Grad or Grad Predjama) is an impressive castle which is built inside a cave. This makes it an impregnable medieval stronghold with an amazing history. Like, for instance, the story about the Slovenian Robin Hood. The cave under the castle is home to a colony of bats, but something else lurks here as well…

The history of Predjama Castle

Before the castle was even built, the cave itself was home to cave people during the Paleolithic era. It’s the second largest cave in Slovenia. The biggest cave, the Postojna Cave, is only 9 km (5 miles) away. The castle, which was named Castle Luegg first was first mentioned in 1274 but it was probably built in the 12th century. Slovenia then was part of the German empire. Luegg is the name of the German family who owned the castle back then. In the 15th century, one Erasmus (Erazem) Luegg (or Lueg or Leuger), ruled the castle.

During his reign, the castle got heavily damaged after having been seized by the Habsburgs for over a year. The Oberburg Family took over the damaged castle and rebuilt it around 1510. Unfortunately, the castle was nearly destroyed during a massive earthquake in 1511. In 1570, the current castle was built in the Renaissance Style, right in the middle of a 123 m (404 ft) high cliff. Right under the original medieval fortification. More recently, the castle was used as a hunting lodge for various Austrian aristocrats. The Yugoslavian government put a stop to that after WWII and it became a tourist attraction.

Erasmus Luegg, or Erazem Leuger (or Lueg), was a very clever knight and robber baron (like a Robin Hood, stealing from the rich and giving to the poor). He was the son of the imperior governor of Trieste, Nikolaj Luegg (Lueg, Lueger). He was never really a target until he killed the kinsman (Marshal Pappenheim) of Frederick III, the Holy Roman Emperor. Angering both the Roman Emperor and the House of Habsburg he fled to his castle. The Habsburgs were convinced he wouldn’t last long. They had even poisoned the water wells. But strangely, Erasmus was able to remain safe and sound for over a year.

How? Thanks to a large vertical, natural shaft behind the castle, leading out to the open on the other side of the mountain. He was able to sneak in and out without being seen, even setting out on his plundering expeditions. Servants were able to get fresh food and a rainwater conservation system provided the castle residents with fresh water. Erasmus liked to tease his attackers by throwing fresh local products at his attackers like cherries. Eventually, Erasmus was betrayed by one of his servants. He raised a flag when Erasmus was using his toilet in one of the outer (less protected) buildings and a canon ended his life. The place where Erasmus is buried is marked with a tree.

Because the castle was built to defend itself, it had some other surprises in stock as well. It has holes in the ceiling of the entrance tower for pouring down boiling oil onto intruders and a very dark dungeon. There was a space in between the walls of the dungeon made to brick people in the wall. Bones were found inside the thick wall. If you were an enemy and captured, you were brought to court.

Inside the castle there is a small courtroom which could overlook the small torture chamber. In the courtroom there is also a door leading to a deep 63 m (207 ft) vertical cave drop, so either you were tortured or executed at the spot. There was nothing in between. On the bottom of this shaft, the bones of the unfortunate souls still rest. They were never recovered. Can you imagine the fear and agony in that place?

The ghosts of Predjama Castle

The castle has been investigated by several paranormal teams and programs. According to some psychics, the ghost of Erasmus still haunts the castle looking for revenge. In 2008, Ghost Hunters International, paid a visit to the castle and paranormal evidence was found both inside the castle and in the caves behind it. Footsteps and voices are heard all around. The caves underneath the castle are mineral caves with quartz and iron. These minerals store energy like large batteries and paranormal energy simply loves that. Some say the captured souls of the people who got locked in during the 1511 earthquake still try to get out.

Predjama Castle is open to the public. A tour around the castle also includes part of the cave system, but people who are more adventurous can also take the extended cave tour. But not in the Winter, because then the bats will be disturbed. If you visit, make sure to buy a combination ticket to the Postojna Caves because they are amazing! People can even get married there!

Predjama Castle is named in the Guinness Book of Records because it’s one of the best-preserved cave castles in the world. Because it’s such an impressive building, it has been featured in several movies as well. Like the 1986 movie Armor of God featuring Jackie Chan. It also inspired George R.R. Martin for the Game of Thrones. Funny detail: in 1991, a 16th century chest full of treasure was found in the cellar. Who knows what more secrets this castle holds!