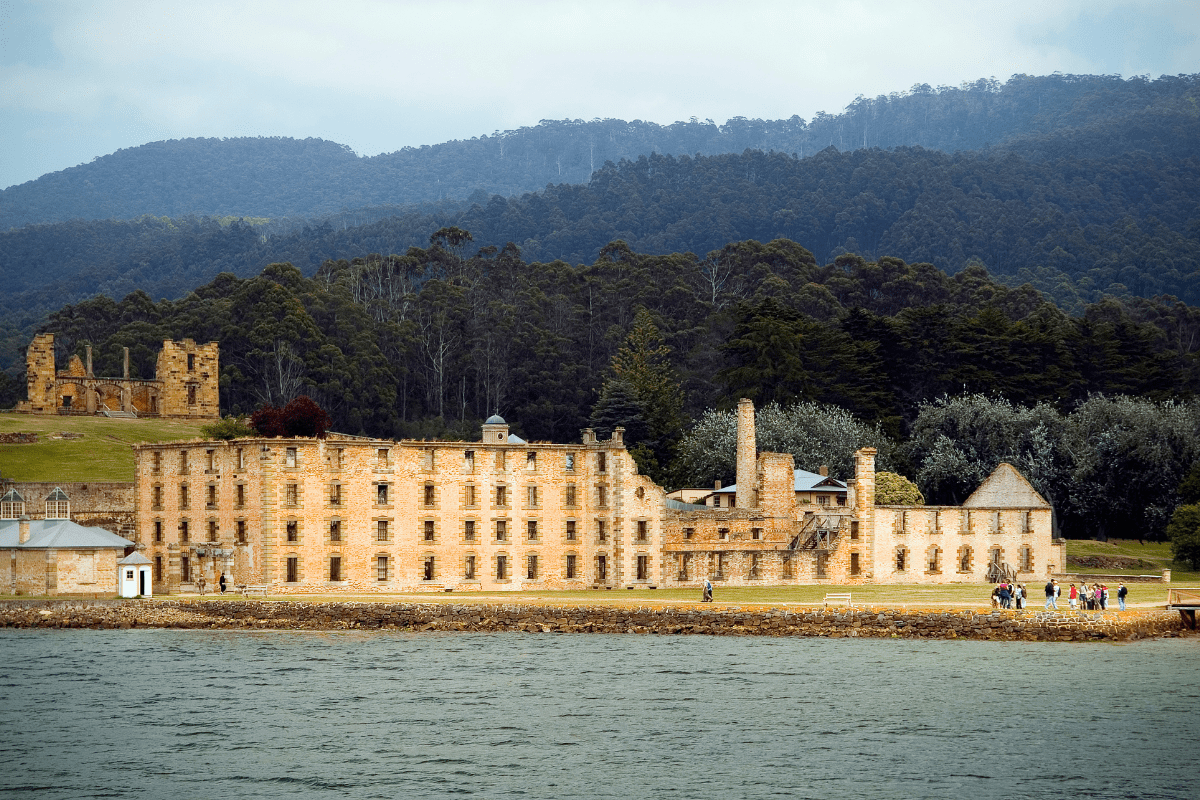 About an hour and a half drive away from the Tasmanian capital Hobart, you’ll find the historic Port Arthur Penal Settlement. It was a colonial penal settlement from 1830. The most violent and unscrupulous criminals were sent here from Britain. Port Arthur had the reputation of the most ruthless prison of the British empire.

The history of Port Arthur

After the American War of Independence, the British were no longer allowed to send their prisoners to America. Instead, they moved their prisoners to their Australian territories, such as Norfolk Island and Port Arthur. Port Arthur served as a prison from 1830 until 1877, and more than 12,500 convicts were held prison here. In 1830, Port Arthur started off as a small timber station, but between 1833 and 1850 the area was expanded. In the end, the complex consisted of 60 buildings, all built by convicts. It was self-sufficient and had beautiful gardens, also all built by convicts. To some of which, Port Arthur was Hell, and to others it was a way of learning new skills. Skills they could use after their release.

Men and women were sent to the island. One in five convicts was a woman. Children often went along with their parents. Only a few returned home. Most convicts who were sent to Port Arthur had committed crimes before. A following crime, some as little as stealing a bread, would put them on transport to the island. Mainly poor people ended up on the island. The conditions and the labour were harsh. The worst places where a convict could end up were in the underground cells of the Coal Mine or the punishment cells where convicts would spend all day in complete silence and darkness.

Murder in the church

Of course, there were incidents among convicts as well. A young man named William Riley shocked the guards when he suddenly killed Joseph Shuttleworth while working in the church. Shuttleworth was a frequent offender and an unpopular convict. Riley took his pickaxe and gave three blows on Shuttleworth’s head with it. After the murder he said he was satisfied now. Whatever his motive was is still unclear. But, Shuttleworth did have the reputation of annoying other convicts. The church still stands today. The church is unconsecrated and was built to reform Port Arthur’s convicts through a regime of religious instruction and worship.

The Isle of the Dead

The Isle of the Dead is a small uninhabited island just off the coast of Port Arthur. This was the place where dead convicts and civilians were buried after they died. Mostly in unmarked graves. More than 1,000 people died at Port Arthur during the years of operation. A man named Mark Jeffrey, was sent to the island to serve as a grave digger. Jeffrey was a convict with sudden bursts of rage and he continuously stood up for his rights. This earned him constant punishment.

At some point, the guards had enough of his rage and they sent him off to the Isle of the Dead. There he had a terrifying encounter with the Devil himself. Jeffrey claimed he came to his cottage one night and spoke to him. Jeffreys was terrified and begged if he could come back to Port Arthur to serve the rest of his time.

The ghosts of Port Arthur

Sightings of ghosts and unexplained phenomena have been reported at Port Arthur since 1870. It’s often referred to as being one of the most haunted places in Australia. Strange light anomalies, poltergeist activity and hearing disembodied footsteps are some of the accounts. Some claim to suddenly feel overcome with sadness and dread. But people have also been touched and have seen apparitions.

The apparitions of Port Arthur

A little ghost girl has been seen running between the rooms. It is known that children used to live in the complex; some were the children of the employees who lived on Port Arthur, others came with their parents who were convicts. Children’s laughter is one of the most common phenomena. Another small girl has been seen with her pale face pressed against one of the windows of the medical officer’s residence. The ghost of an older woman in a rocking chair has been seen many times as well. A soldier wearing a red uniform has been seen in Tower Cottage and a disembodied head that hovers in the dissection room.

The Lady in Grey/Blue

A Lady in Grey/Blue has been seen on numerous occasions as well. She’s wearing a long, pale dress from the waist to the ground and she’s wearing a bonnet. It is believed that she was married to one of Port Arthur’s staff members and that she lived in the penal settlement. The Lady in Grey/Blue is believed to have died during childbirth. She has been seen wandering the gardens and looking out from a door from one of the buildings.

Today, there are 30 buildings still present on the site. Some of these buildings are in ruins, some are accessible. Several tours are provided including a Historic Ghost Tour. You can even book a boat trip to the Isle of the Dead!