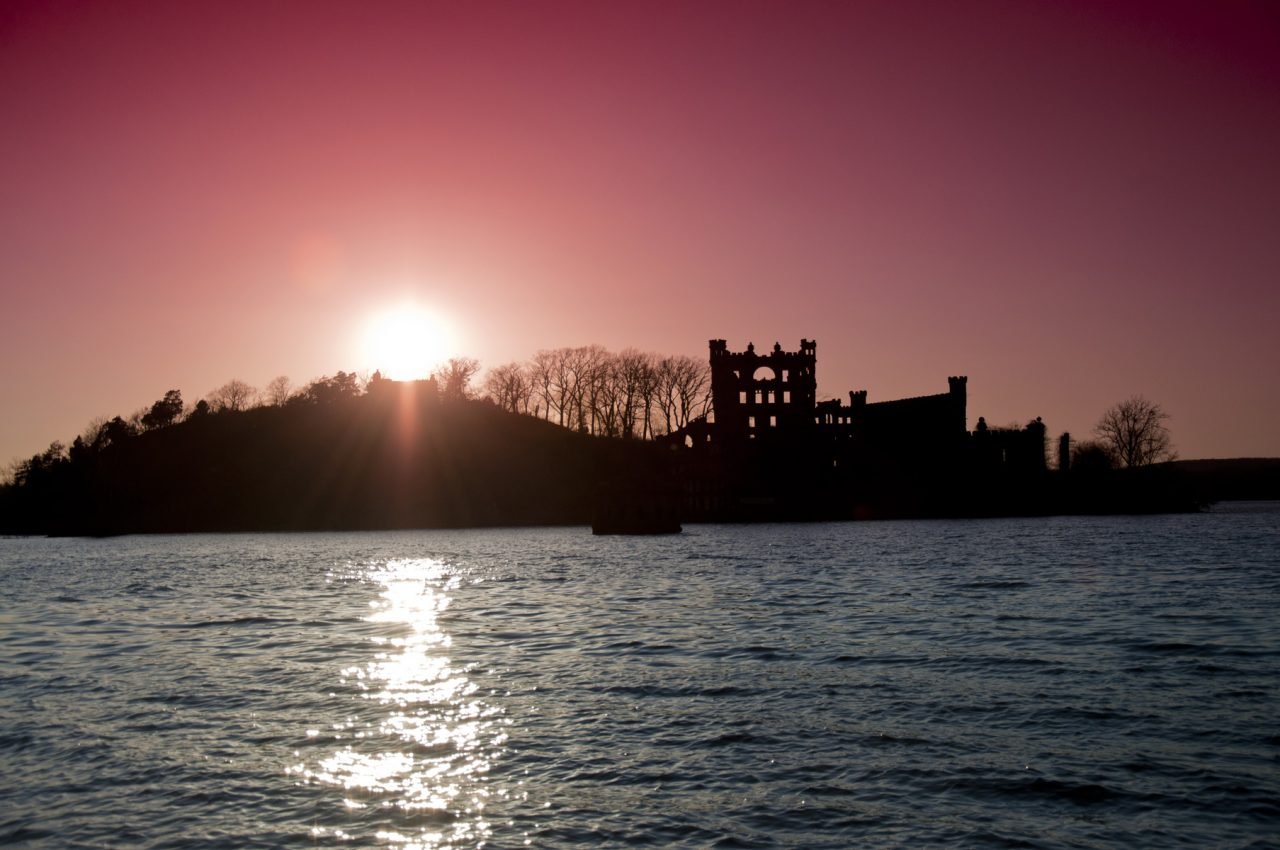 Located in the Hudson River, just off the coast of New York, you’ll find a 6,5 acres (26,000 m2) island. It’s abandoned now, but occasionally “hard hat” tours are given on this Pollepel Island. The island once housed an impressive castle-like storage facility. But, all that’s remained are some exterior walls and a lot of creepy legends.

The history of Pollepel Island

Native Americans already knew about Pollepel Island before the first Dutch settlers discovered it. They refused to enter the island after sundown, believing it was inhabited by evil spirits. The fear of the Native Americans soon spilled over to the Dutch. They feared the sudden storms that sunk many of their ships. According to them, the heavy storms were caused by The Storm King, a spirit who sent his storm ships full of murderous goblins to kill them. One thing is for sure, whoever set foot on the island was doomed for eternal tragedy.

How Pollepel Island got its name

There are several stories about why the island was called after a Dutch kitchen utensil. A pollepel in Dutch means potladle. The term “pollepel” might be traced back to these Dutch settlers. Apparently, a drunken sailor was called a Pollepel. Drunken sailors were left on the island to sober up. By the time the ship returned for them, they’d have a clear mind again. Of course, no one wanted to be left in this creepy island by himself.

Another legend says that first-timers were dropped on the island after being intoxicated to appease the awful Lord of Dunderberg, the king of the goblins. And last but not least, the island may have been named after one Polly Pell, a farm girl who narrowly escaped death thanks to the island. She and two of her admirers were playing on the ice when the ice suddenly broke and they were saved by the island’s shore.

During the Revolutionary War, Pollepel Island played an important role. Patriots attempted to prevent the British from passing upriver. They did this by placing 106 so-called chevaux-de-frises in the waters. These were logs with large iron spikes on top of them. Remains of these chevaux-de-frises can still be found on the bottom of the river. General George Washington later signed a plan to use the island as a military prison. However, there’s no evidence that this plan was ever implemented.

Francis Bannerman VI came to the USA from Northern Ireland with his family. The family moved to Brooklyn where they started a military surplus business in 1865. Francis was only 14 when he picked up the business and it grew larger and larger. In 1900, the military surplus didn’t fit in the original storage anymore, so Francis decided to buy Pollepel Island. In the Spring of 1901, he began constructing an arsenal. Francis designed the whole building. He was inspired by the large Scottish castles he had seen while visiting his Scottish grandfather. The building was so high in 1908, that it was visible from the mainland. This was the best marketing the business could have. Business was going well, until tragedy struck.

In August 1920, a large part of the construction was destroyed when 200 pounds of shells and powder exploded. This was most likely caused by a strike of lightning. Shortly after, business began to decline because of State and Federal Legislation. Military weapons were no longer allowed to be sold to civilians. In 1950, the ferryboat The Pollepel, which had served the island, sank during a big, sudden storm. Sounds familiar? After the boat sank, the island was abandoned and the buildings were left behind to decline.

After Bannerman’s Castle was abandoned, the island and the buildings were bought by the State of New York in 1967. They turned the island into a tourist attraction in 1968 and tours were given. That plan didn’t last very long, because a large fire in 1969 ruined the arsenal. Roofs and floors were destroyed, only leaving the exterior walls stand. From then on, the island was off-limits to the public. But, that didn’t keep people from entering. Vandalism, trespass, neglect and decay made things even worse. In 2009, it became so bad, that parts of the castle collapsed.

Murder on the island

On April 19, 2015, the island was turned into a crime scene. Angelika Graswald took her fiance Vincent Viafore to the island for a romantic kayak trip. Viafore, however, never returned from the island. Graswald was charged for his murder. Later, the charge was changed into “criminally negligent homicide” and she was released not much later. This, and all the other strange occurences on the island, inspired many. It has appeared in literature, movies and music.

After some work has been done on the castle and the island, it’s open for hard hat tours again. Small groups only. The once stately arsenal still stands and it’s very worth the visit. As long as you don’t fear the Storm King, that is.