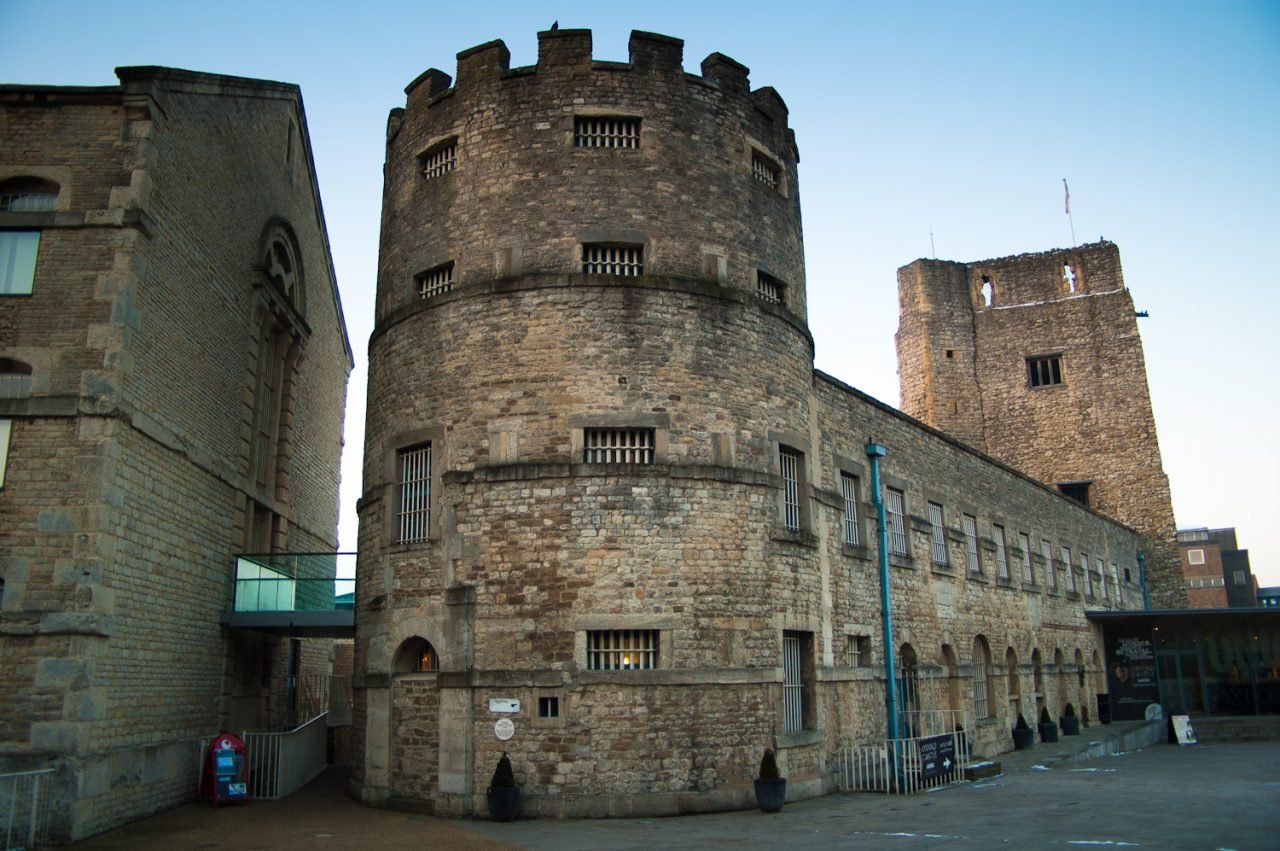 The oldest building in Oxford, England, is Oxford Castle. Initially built for defence, the castle was quickly turned into a prison. Life at prison back then was extremely hard and people were executed for crimes such as murder, but also for sheep stealing and other “minor offences”. It’s not hard to believe a place like this is haunted. And it is.

The history of Oxford Castle

The castle was built in 1071 by Robert d’Olly, a Norman baron. He was a close ally of William the Conqueror. Most of the original moated wooden motte-and-bailey castle was replaced in stone in the late 12th century. It was then that the castle was turned into a prison, but it wasn’t formally a county prison until much later, in 1531. Oxford Castle has played an important role in The Anarchy, a civil war between Normandy and England between 1135 and 1153. Let’s take a closer look at this later.

Most of the castle was destroyed during the English Civil War (1642 – 1651) when Royalists made Oxford their capital. The castle was then used as a fortification and most of the medieval stonework was replaced by more modern bastions. The oldest original part of the castle is the St. George’s Tower. The castle was rebuilt, remodelled and expanded several times. The way it looks today originates from 1876. Then it became HM Prison Oxford.

The oldest feud that’s connected with Oxford Castle is a war called The Anarchy. After Henry I’s only son, William Adelin, died in 1120, he wanted to install his daughter Empress Matilda on the throne, but his attempts failed. When Henry died in 1135, his nephew Stephen of Blois, seized the throne with help of his brother Henry of Blois, the Bishop of Winchester. In 1139, Mathilda invaded Oxford with the help of her half-brother Robert of Gloucester. With success, because Stephen was captured in 1141 following the Battle of Lincoln.

On the verge of being crowned, Matilda learned that her half-brother Robert was captured as well. The only way to free him was to swap prisoners. Stephen nearly seized Oxford Castle in 1142. Matilda, however, managed to escape one freezing night in December by lowering herself down the castle by a rope and escaping over the frozen Thames River. The war dragged on for years and Mathilda returned to Normandy which by then her husband had conquered. She left England up to her son, Henry FitzEmpress. History repeated itself when Stephen unsuccessfully tried to get his eldest son on the throne. Both Henry and Stephen were fed up with the war by then, so they negotiated peace together. During this negotiation Stephen agreed that Henry would take the throne after his death. So, Mathilda won anyway.

Oxford Castle as a prison

In the 14th century, the castle lost its military value and was turned into a county administration building and a prison. Like other prisons at that time, the owners (the Christ Church College) leased the castle to wardens who profited by charging prisoners for board and lodging. There were about 200 reasons to get one hanged. Among the prisoners there were also children. The youngest was a 7-year-old girl who was sentenced to 7 days hard labor for stealing a pram.

During the 1640’s, in the English Civil War, a man by the name of William Smith ruled the prison with an iron first. In fact, soldiers were warned to rather fight themselves to death than to fall into the hands of this cruel man. His tyranny was ended in 1646, when King Charles I fled the country and the Civil War ended in Oxford.

In 1650, a woman by the name of Anne Green was sentenced to death by hanging for killing her own infant child. It’s likely that the child had already dead at childbirth, but Anne was found guilty of killing the baby. Anne’s execution was quite brutal. Her neck didn’t snap, and her friends couldn’t watch her suffering, so they pulled her legs to finish the job swiftly. When Anne’s execution was over, she was taken down. But, she suddenly started showing signs of life. A doctor at the scene revived her and she made a full recovery! She was acquitted of her sentence and lived another 15 years. She even had three more children! Her story is similar to that of half-hanged Maggie, who survived her hanging in Edinburgh, Scotland.

On July 6, 1577, the foul-mouthed bookseller Rowland Jenkes was brought before the assize court to be tried for his allegiance to the Pope. He was found guilty and was sentenced to lose both his ears. Jenkes was furious and pronounced a violent curse on the court, the jury and the judges. Almost immediately after his trial people started to fall victim of a mysterious illness. They literally dropped to death. Around 700 people fell ill, and the infection raged until August 12. By then, two judges, the coroner, the sheriff, a clerk and many members if the jury were dead. There were no victims among women, children and poor people. This “curse” is referred to as the Black Assize.

In 1752, a woman by the name of Mary Bandy was sentenced to the gallows for poisoning her father. Mary Blandy was born in a wealthy family and raised as an intelligent woman. When her father, Francis Blandy, was worried his daughter was becoming a spinster, he found her a husband in Scotland. Captain Henry Cranstoun was the perfect candidate and Mary was very charmed by him as well. But shortly after they courted, a problem came to light. Henry was married back in Scotland, so Francis sent him away.

Mary was heartbroken but delighted when Henry sent her a package containing a love potion. The included letter told her to put it in her father’s dish so he would give his blessings to their marriage anyway. Blinded by love, Mary did what she was told, but when her father got sick the next day, she started worrying. Her father’s condition was getting worse and he finally died. The love potion contained arsenic and Mary was betrayed by a couple of servants who had seen het tampering with her father’s food. Even the press was present at her hanging.

All those different layers of history and all the human emotions within its wall make Oxford Castle incredibly haunted. The Oxford Castle & Prison now even offers ghost tours. People who work at the castle at night refuse to work by themselves. Desperate wails, poltergeist activity and horrific screams are just a few of the paranormal occurrences. A white mist frequently rises at one of the stairwells and disappears at the top and disembodied footsteps are often heard around the prison wing corridors. One prison guard got the fright of his life when he was on night patrol with his dog. His dog started to growl at something in front of them and suddenly two large shadow figures appeared. He managed to bring them to safety, but sadly the dog passed away a couple of days later, probably of fear.

Other ghostly residents of Oxford Castle

Mary Blandy has been seen walking the area where she was hanged and a woman in a white cloak, who is believed to be Empress Matilda, has been seen sitting on the stairs as if she’s waiting for somebody. She doesn’t seem bothered by living people. A monk haunts the 900-year-old crypt and the ghost of a small child has been seen walking around the prison wings. But there’s a dark presence as well…

A group of people did a séance in one of the cells in the 1970’s. They couldn’t finish their session because they were attacked by a dark, malevolent entity. A priest was called to perform an exorcism but failed to curb the wandering spirit.

Oxford Castle was used as a prison until September 7, 1996. The castle was redeveloped in 2004. A luxury hotel, several apartments, a restaurant, a bar and an art gallery were created. The oldest part of the castle was turned into a museum. And it’s open for guided haunted tours! You can have a look in St. George’s Tower, D-Wing and the first two floors of Deptor’s Tower. You can also access the well-chamber in the castle mound, the punishment cells in the exercise yard and… the mysterious crypt. You can even book a sleepover! Would you dare to spend the night?