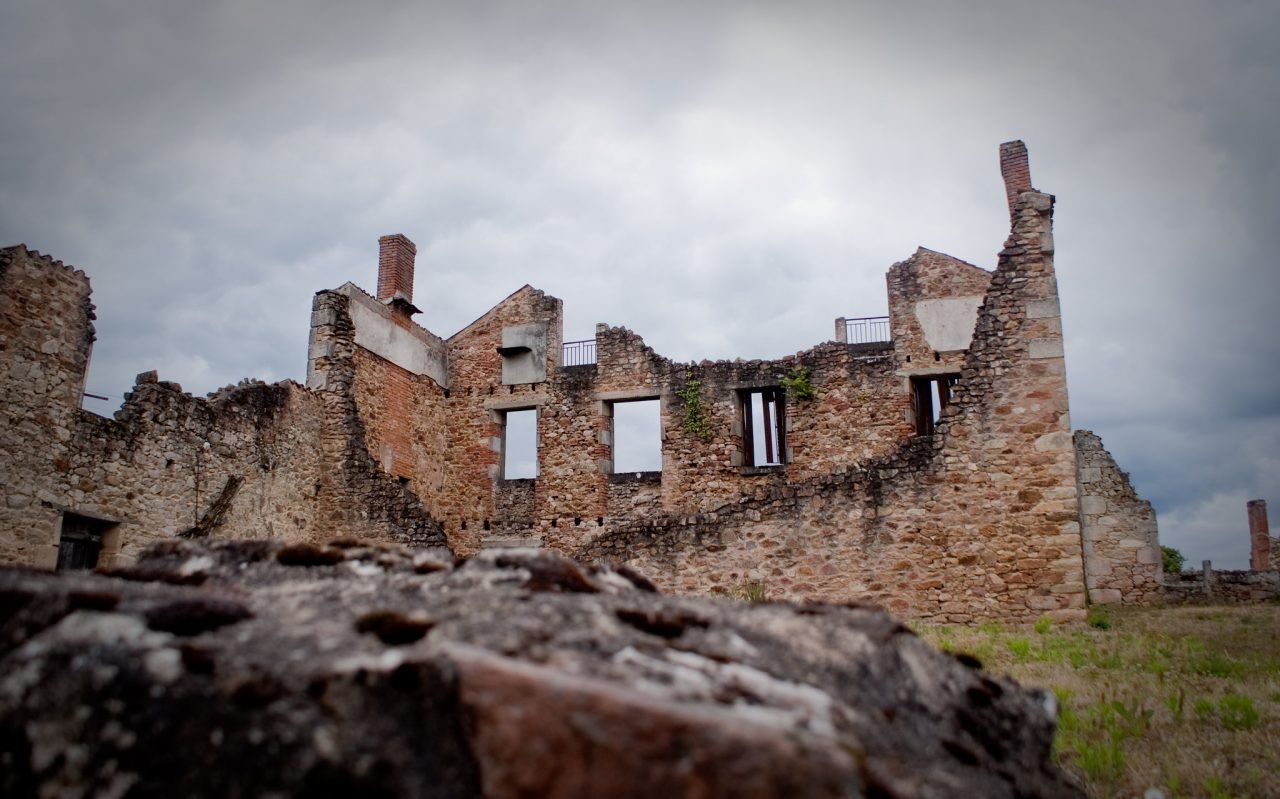 The village Oradour-sur-Glane is a typical rural village in the French Limousin region. Until June 10, 1944, the village was quiet and insignificant and would have never made it to the history books. But that day everything changed. This black day in history put the village immediately on the map. The destroyed village has never been rebuilt or demolished, because this should always remain a memory.

This Saturday started off as every Saturday in Oradour-sur-Glane. The women bought their groceries to prepare themselves on Sunday, the men were working on the land and the children were playing. Even though WWII was far from over, the residents or Oradour-sur-Glane were not bothered much by the German occupier. Sometimes they would see a German army vehicle drive by and there were some refugees from the nearby department Moselle, but that was about it. What they didn’t know was that around noon, about 10 kilometres (6 miles) away, the German major Diekmann was preparing his troops to head over to Oradour-sur-Glane.

Diekmann set up a farmhouse between Oradour and Bordes as a command post and entered the village with his column at 1:30 PM. The residents was told that this was a standard identity check, but the village was completely surrounded. All exits were blocked off. By then, the atmosphere was still relaxed. There was some grumbling because the daily routine was disrupted, but some French speaking members of the SS-Panzer Division “Das Reich” soothed and reassured the residents.

Around 3 PM, the atmosphere started to change when the column started separating the women and children from the men. This was not well received, but still didn’t cause the residents to panic. Even when the women and children were taken towards the edge of the village, where the church was standing. The group was led inside the church and locked inside along with a large wired box. Meanwhile, the German soldiers searched the homes looking for weapons.

The men were all taken to four large barns. The soldiers, who had been carrying their guns on their backs the whole time, now took them and started loading their weapons. The atmosphere changed to pure fear: what were these soldiers up to?

A nightmare inside the church

Meanwhile, panic broke out inside the church as well. Some women thought the box suspiciously resembled a bomb. It was detonated at 4 PM, but instead of blowing up the church at once, it caused a fire. Many women and children were burned alive. Mrs. Rouffanche managed to climb out of a broken window with the help of a kneeling bench. She was followed by a young woman who was carrying a baby, but the young woman was shot and killed before she managed to escape. The church had been surrounded by German soldiers who shot everyone who tried to escape. Mrs. Rouffance was lucky. Even though she was hit five times and heavily injured, she was able to hide in the bushes. She stayed there for 12 hours until she thought it was safe to get out.

The explosion was also heard inside the four barns. This was the call to action for the German soldiers. They started firing their guns at the men. Robert Hébras ended up under the bodies of his dying fellow villagers. He smelled the gunpowder and the blood. Robert recalls thinking he ended up in hell, but somehow he managed to survive the blood bath. He stayed hidden underneath the bodies until he was sure the soldiers had left. Four of his friends also survived the attack. Along with Mrs. Rouffanche, they were the sole 6 survivors. That day, 642 lost their lives: 109 men, 247 women and 205 children. The youngest was only one week old. The village was completely destroyed. It was burned down after the attack.

The reason why Oradour-sur-Glane was targeted has never been cleared. There were no troublemakers in the village and no one intervened in the war. The attack on Oradour-sur-Glane was most likely a personal vendetta. During the allied attack on Normandy named Operation Overlord, better known as D-Day on June 5, 1944, the French stood up against the German invader. Telephone poles and bridges were destroyed by the French to make it hard for the Germans. On June 8, 1944, SS-Sturmbannführer Helmut Kämpfe was killed when the railway bridge of Saint-Juniën near Oradour-sur-Glane was blown to pieces. Kämpfe was a close friend of Adolf Dietmann. He was probably just looking for a scapegoat.

On January 12, 1953, the trial against the perpetrators was set in motion. Twenty-one members of the SS, among them 14 French men from the Elzas who were forced to enlist, were given various punishments. Some were given the death penalty and  others were put on forced labour. Eventually, many of these punishments were remitted and the death penalties were commuted to life imprisonment. When the 6 survivors of the horrors in Oradour-sur-Glane heard this, they rebelled against the French Government. They no longer wanted to be part of France.

Unfortunately, the Oradour-sur-Glane drama was overshadowed by the earlier atrocities that happened in Lidice. On June 10, 1942 (yes, June 10 once more), this Czech village was destroyed and 192 men, 60 women and 88 children lost their lives. The whole world expressed its support, but Oradour-sur-Glane was completely overlooked. Shortly after the war, general Charles de Gaulle came to the village. He was deeply moved by the terrible happenings in the village and he forbade the village to be rebuilt. Instead, he erected a museum. This underground museum commemorates the horrors that took place that day. A tunnel leads the visitors above ground, right in the middle of the ruined village.

The ghosts of Oradour-sur-Glane

None of the residents of the new Oradour-Sur-Glane dare to visit the old village after dark. They say the tortured souls of the victims roam the streets at night looking for their loved ones. People claim to smell burned wood and flesh when they walk the streets. The residents of the new village regularly leave presents to appease the dead. You can visit this impressive village. There are about 300.000 visitors each year. Each house has a plaque saying who used to live here or whose shop this used to be. There were hairdressers, bakers and butchers. Even the burned Peugeot of the general practitioner is still there. A very impressive place indeed which will never be forgotten.