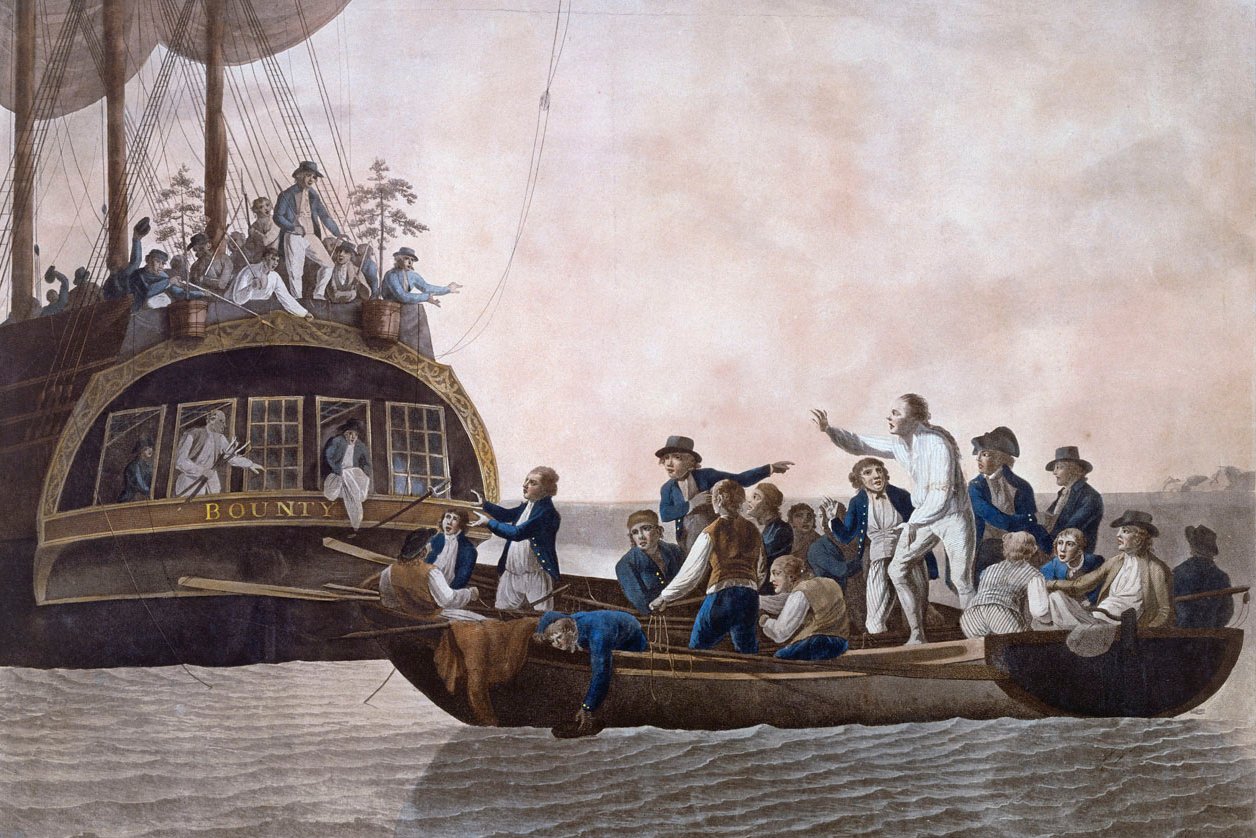 Mutiny on the Bounty

Although this following story is not paranormal, it is part of history. And it has close connections to Norfolk Island, which I have written a story about as well. We all have heard of the Mutiny of the Bounty. A story which has always fascinated me. I decided to research the story and share it with you. It’s a great adventure, I can tell you that!

HMS Bounty had left England in 1787 to set sail to Tahiti to collect and transport breadfruit plants. The plan was to take the plants to the West Indies. The ship sailed under Captain William Bligh and would stay in Tahiti for 5 months. During this period, the crew slept on the island and soon relationships under the Polynesian natives and the crew members occured. Many men became less amenable to Bligh’s military discipline.

Back on board, Bligh tried to get his men back in line. He started giving hard punishments to everyone who would undermine his leadership, he started criticizing his crew and even abused them. Fletcher Christian, the ship’s lieutenant, was particularly the target. Bligh even accused him of stealing his private stock of coconuts, punishing the entire crew by prohibiting them rum and downsizing their food rations by half.

The Mutiny of the Bounty

Christian was so fed up with his captain that he started collecting wood to build his own raft. Two young men, George Steward and Edward Young, urged him not to leave the ship. They told him more crew members had it with Bligh and that he would have enough men on his side to capture the ship and get rid of the captain. Christian thought about this long and hard and decided to take his chance in the early morning of 28 April 1789. He convinced three men to capture the captain in his hut.

He made them bind his hands behind his back and he wanted them to bring him on deck. There, Bligh and 18 of his loyalists were forced into a launch (an open boat) and off the Bounty. Christian had not been sure about his action at all. Journals from the past say he had a heavy sounding plummet hanging from his neck in case the mutiny went wrong. His plan was then to jump overboard and drown. But, that wasn’t neccesary. The Bounty set sail in the opposite direction.

Captain Bligh kept a journal during his awful hardship at sea. They set off to the nearest island, Tofua, to get supplies. The men were given a warm welcome from the natives, but that soon changed. Bligh knew he had to get his crew off the island fast. But, when they departed, the Tofuan natives held onto the boat’s rope. Bligh’s quartermaster tried to free the boat and he jumped out to get the rope, but he was stoned to death by the natives immediately. The boat was set free, but the crew was heavily shaken by the incident. Bligh tried to keep up the morale by telling tales, singing songs and also praying. That didn’t make life in that open boat easier. The weather conditions were hard: there were storms, heavy rains and it was cold. The crew was constantly soaked and exposed to the weather.

On May 17, the weather started to get better and the boat reached land. They reached Fiji! But, Bligh didn’t want to enter Fiji because of its cannibalistic reputation. Food was running scarce and the men were tired, sick and frustrated. On May 28 the launch made it to The Great Barrier Reef. They decided to dock on an island called Restoration Island where they found oysters and berries. Things were looking up a bit, but the crew did fear the hostile stares of the natives on the mainland. So, they decided to head on. When Bligh and his crew nearly gave up, they reached Kupang on June 14. Here, Bligh reported the mutiny to the authorities and wrote to his wife Betsey. Due to illness, the harsh Kupang weather conditions and just sheer exhaustion, many of Bligh’s loyalists died after all.

What happened to the Bounty?

Twenty-five men remained on board the Bounty, including some of Bligh’s loyalists who didn’t fit onto the launch. The group was divided, and that was obviously a threat to Christian. Bounty set sail back to Tahiti where a few men decided to take their chances. The other men sailed on to Pitcairn Island. After Bligh reported the mutiny on Kupang, the HMS Pandora set sail to capture the mutineers. Captain of this ship was Edward Edwards and he first set off to Tahiti. There, he captured 14 mutineers and put them in a specially constructed prison which was called Pandora’s Box. Christian’s group remained undiscovered for a long time.

The 14 captured mutineers were taken on the long journey to England. They didn’t get far, though. On August 29, 1791, Pandora ran aground on the outer Great Barrier Reef. The crew ignored the men in Pandora’s Box because they attempted to prevent the ship from sinking. At some point Edwards knew the ship would sink so Pandora’s Armourer was ordered to remove the prisoners’ shackles. The ship sank before he had finished and 4 prisoners and 31 crew members perished. Eventually the 10 remaining mutineers were taken to court. Four mutineers were acquitted, 3 were pardoned and 3 were hanged. But, what happened to Christian?

The only surviving mutineer, John Adams, was found on Pitcairn Island in 1808. Christian and the other mutineers were all killed. Some were killed by their own crew members and others by natives. No action was taken against Adams and he and the descendants of the mutineers were able to stay at the island. In 1856, they moved to Norfolk Island. In the 21th century, descendants of the mutineers of the Bounty can still be found here!