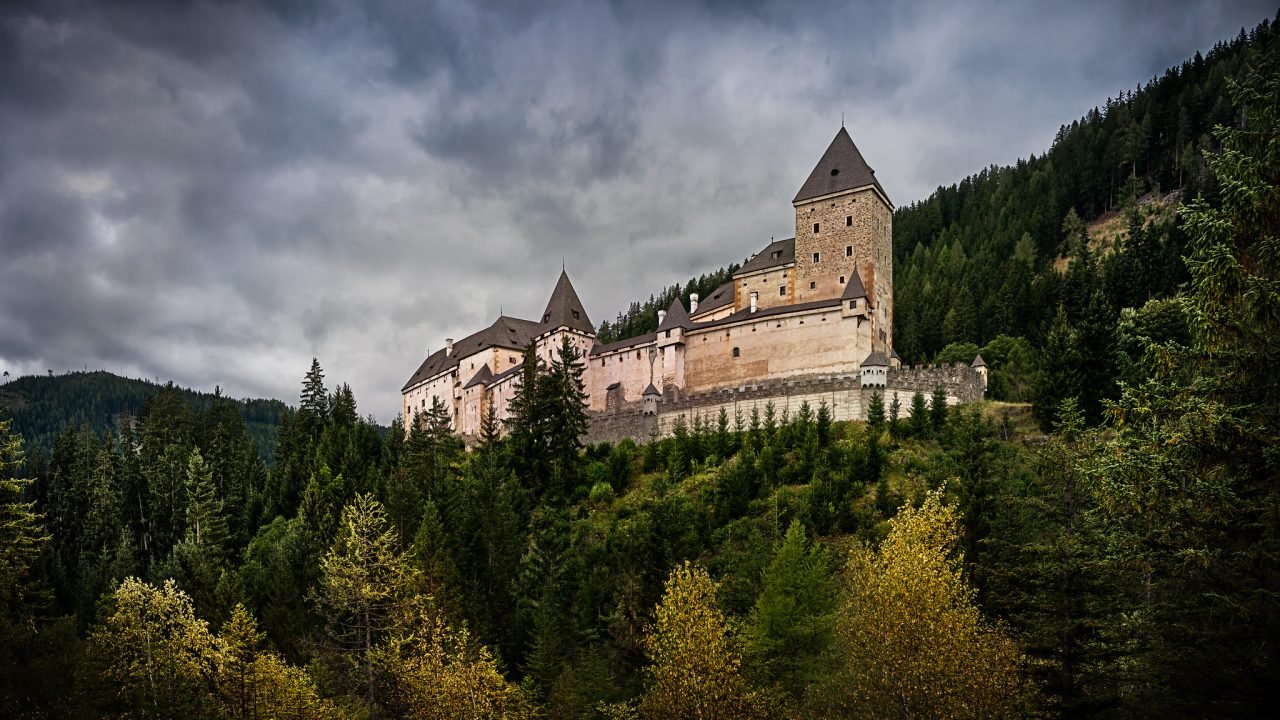 Moosham Castle or Schloss Moosham is a medieval castle in Unternberg, region Salzburg, Austria. The so-called spur castle is located on a high point, overlooking the entire area. Building fortifications on top of mountains and hills was done for defense purposes. The castle was involved in at least 45 bloody battles. But the battles are not the reason why Moosham Castle is so infamous.

The history of Moosham Castle

The castle is built on top of the foundation of a Roman fortress, but these are no longer visible. It was first mentioned in documents dating back to 1191 and it has been modernized and extended since. Moosham Castle overlooks the area at a height of 1,079 meters (3,540 ft). In 1285, Moosham Castle was seized by the Prince-Archbishop of Salzburg. Then, a long period without documentation went by until the 14th century.

During that time, Moosham Castle served as the residence of an episcopal burgrave. It was then that the castle was extended and modernized. In the 1520’s, the castle became the region’s administrative seat.

Moosham Castle was the scene of local wars, the crusades, several Austrian-Hungarian wars and the Flemish Revolt against Maximilian of Austria (1428 – 1482). The castle was besieged by peasants during the German Peasants’ War (1524 – 1525.) Archbishop Wolf Dietrich von Raitenau stayed at Moosham Castle on his flight from Salzburg in October 1611, shortly before he was captured and imprisoned for life. You could say the ground is saturated with blood, but there is one period in history that’s even more gruesome than all these wars together.

Moosham Castle is the scene of one of the most horrible witch hunts in European history. The so-called Zaubererjackl Trials (1675 – 1690) led to the execution of 139 people. The remarkable thing is that most of the executed were male. The mass-hysteria started when Barbara Kollerin was arrested for theft and sorcery in 1675. She was put on trial along with her partner Paul Kalthenpacher. During torture, Barbara confessed that her son, Paul Jacob Koller, had made a pact with Satan. Paul Kalthenpacher confirmed her story. Barbara was executed in August of that year, and the hunt for Jacob began.

In 1677, the government received the news that Jacob was dead. But, when they arrested a young beggar named Dionysos Feldner, that news was contradicted. The 12-year-old handicapped Feldner, also known as “Dirty Animal”, told the authorities that he had been in contact with Jacob shortly before his arrest. According to him, Jacob, or Jackl, was the leader of a gang of beggar children and teenagers from the slum. Feldner also claimed Jackl had taught the children black magic. His confession led to the arrest of hundreds of homeless children and teenagers.

During the interrogations, the stories about Jackl grew larger and larger. In the end, the authorities even feared the man for his bloodthirst and cruelty. They actually preferred to avoid capturing the man. So, even though Jackl was the most famous wizard in the city’s history, he was never captured. Instead, the witch hunt for homeless children and teenagers continued.

The witch trials took place on the grounds of Moosham Castle. The castle was involved in the whole process. The administration, the court, the imprisonment, the torture and the execution. Of the 139 executed, 113 were male. They were executed because they were loyal followers of Jackl. Thirty-nine were just children. The youngest, Hannerl, was only 10-years-old. Fifty-three executed were aged between 15 and 21. Twenty-one executed were of unknown ages. The oldest to be executed was Margarethe Reinberg, who was 80-years-old when she was killed.

Most of the executions, 109 in total, took place in 1681. Before the followers of Jackl were executed, they were brutally tortured. Some have had their hands cut off and had been marked on the chest with a burning iron. Some were hanged, some decapitated and some were burned at the stake while they were still alive. This really was a very dark piece in history.

After the witch hunt

The witch hunt ended in 1690, and life at Moosham Castle turned back to normal. This lasted until 1790, when the Archbishop Count Hieronymus von Colloredo dissolved the Moosham bailiwick. Without the churches’ finances, the castle fell into disrepair. Not long after this event, local deer and stock were found mutilated and killed in the area surrounding the castle. The superstitious locals soon started pointing at the remaining residents of the castle. They believed these people turned into werewolves at night, feasting on the flesh of the unfortunate animals. The locals went up to the castle, captured the residents and murdered them in their own courtyard. After this, the castle was abandoned.

In 1886, Moosham Castle was purchased by the Austrian explorer and Patron of the Arts Count Johann Nepomuk Wilzcek. He restored the castle back into its former glory. Even up to today, the Wilzcek family owns the castle. Wilczek’s extensive art collection is accessible to the public. But, the presence of this friendly family doesn’t make the creepy history disappear. Apart from the gruesome history, the building has other tales and legends to tell.

Other tales and legends of Moosham Castle

There are many tales and legends that surround Moosham Castle. One of these stories is about a bailiff named Anton. Anton ruled Moosham Castle in the mid 1800’s. He was nicknamed Schörgen-Toni and was known for his cruelty. He took pleasure in torturing his prisoners in the most horrible ways and he even mistreated his own parents. Even though Toni’s behavior was well-known throughout the entire region, he was never punished for his crimes. The locals started to believe that he had sold his soul to the devil.

One night, when a storm swept over the land, Schörgen-Toni made his final round in the dungeon. He really enjoyed seeing the wounds and pain he had inflicted during the day. Satisfied, he went up to his apartments. When he heard the terrible storm an uncomfortable thought popped up in his mind. He decided to shake the feeling off him by taking a drink and sitting down in his chair. In the meantime, a carriage drawn by four shiny black horses came closer to the castle’s gate. The gates opened for the unknown guest, as if done by magic.

The carriage stopped in the castle’s courtyard and a figure dressed in black got out of it. Toni had nearly dozed off when he was suddenly startled by a knock on the door. Who in the world would set out on a night like this? When he opened the door, he saw the figure in black. The stranger started to speak: “Good night, dear man. I come from Hell and my Prince ordered me to prepare you for your journey”. Toni started to plead. He knew this day was coming eventually, but he wasn’t ready to face his fate. But the dark figure was ruthless and dragged Toni along in his carriage and took him down to Hell. For eternity.

The ghosts of Moosham Castle

Today, Moosham Castle is in the private hands of Countess Theresita Wilczek. But, a large part of the castle is open to the public. Throughout the years, reports of paranormal incidents have been claimed. People feel as if they are being watched, touched, especially in the torture chamber, or being breathed on. Strange white mists and shadow figures have been seen in the corridors. Disembodied voices have been heard during EVP sessions, a dark presence is often felt in Toni’s Room and doors tend to open and close on their own. There are also claims of people hearing footsteps, but when they turn around there’s no one there. Banging noises are often heard as well. Yes, this is one creepy place!

Larnach Castle is often referred to as New Zealand’s only castle. In fact, the 25-room Gothic building is an historic house, also called a mock castle. It’s located on the ridge of the Otago Peninsula near Dunedin. Larnach Castle has a magnificent view: you can even see the Pacific Ocean from here! But, this was […]
The breathtaking medieval Burg Eltz, or Eltz Castle, can be found in the hills of the German town Wierschem, between Koblenz and Trier. Burg Eltz is one of the few castles in the area that was never destroyed during a siege and it can be visited today. This castle used to be the home of […]
We have seen mummies before on this page, but in the Philippines there are very special mummies. These mummies can be found in the Timbak Caves. These differ from the ones we’ve seen before. Especially the way they were conserved is unique. Not a haunted or creepy place this time, but a pretty interesting one. […]
North of the Yangtze River, on Ming Mountain in the Chinese province of Chongqing, you’ll find Fengdu, Ghost City. This city is one large collection of temples, memorials and monasteries. And they are all about life after death. But, why was it built? And for who? Let’s take a closer look.  The history of Fengdu […]