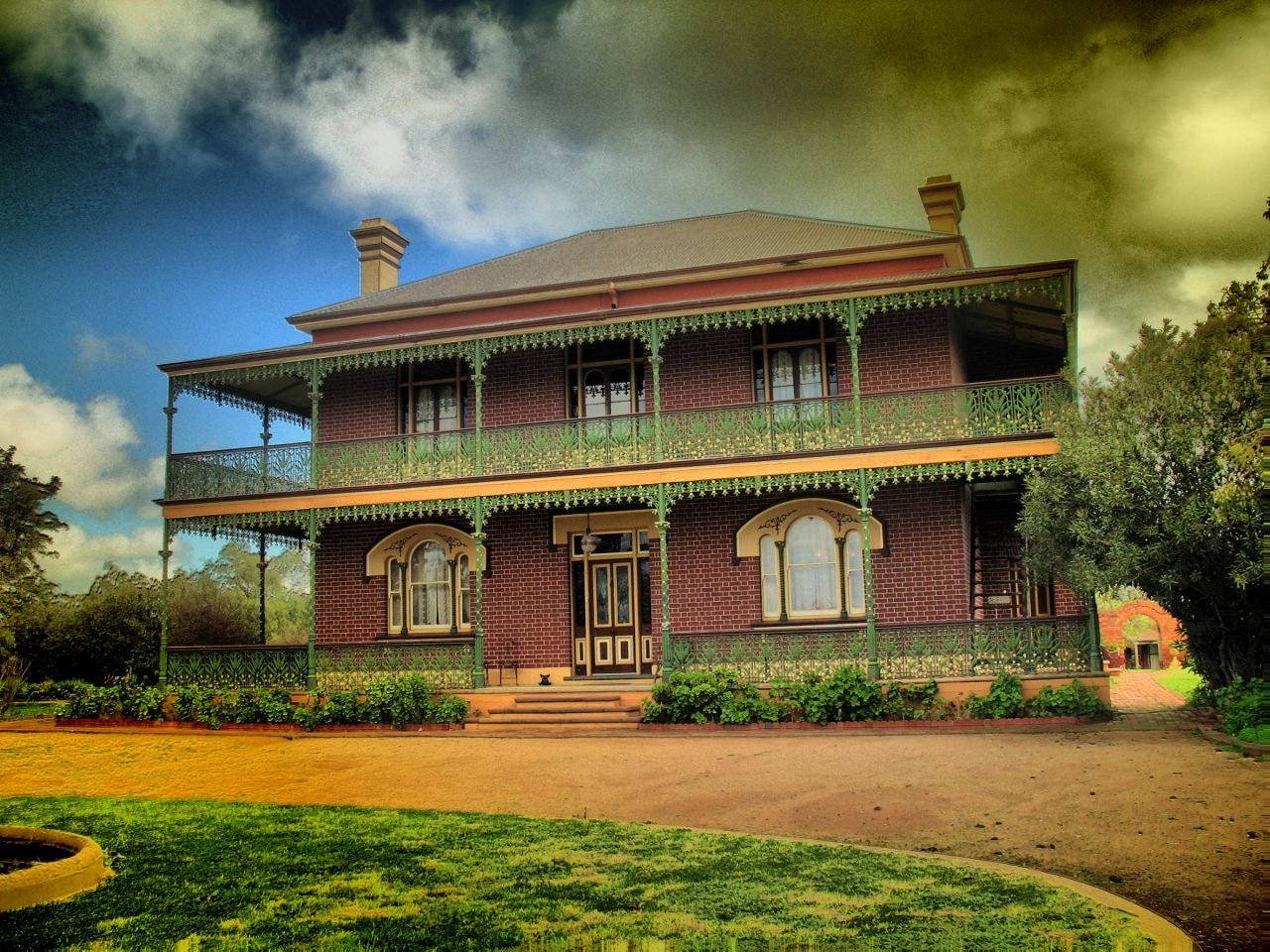 The history of the Monte Cristo Homestead

Christopher William Crawley (1841 – 1910) was a farmer who bought two parcels of land in the town Junee to build his family home. The first few years were a struggle for the Crawley’s. They lived in a slab hut and Christopher had trouble feeding his family. But his fortunes changed in 1878, when the Great Southern Railway Line opened. He scraped all the money he could find together and bought a license to build the Railway Hotel right opposite to the soon to be opened railway station. A very smart move indeed! The village of Junee only consisted of Crawley’s hotel, the adjoining Railway Store and some scattered slab huts.

The entire village benefited enormously of the travelers and agricultural trade. Crawley became very rich and at some point, he even became one of the towns founders. He was much loved for he was a generous man with a big sense of civic responsibility. This all sounds as if the Crawley’s were amazing people, so why is the place haunted the way it is? Let’s take a closer look at that later, shall we?

The built of the Monte Cristo Homestead

Prior to the construction of the new homestead (1885), the family (father, mother and 7 children) lived in a small brick cottage. The original slab hut was demolished and turned into a big stable for his prized horses. The small brick cottage, also referred to as the original homestead, still exists. That house was turned into the servant’s quarters. The new home, a two-story house built in the Late Victorian Style, became an ultimate status symbol, and because it was built on a hill, it was overlooking the entire town.

The death of Christopher Crawley

Christopher Crawley died in his own homestead on December 14, 1910, from a combination of heart failure and blood poisoning. The latter was caused by a carbuncle on his neck. It got infected from rubbing against his starched collar. His wife, Elizabeth Crawley, couldn’t cope with her husband’s death; she locked herself inside the house. She spent most of her time up in the attic where she had built a small chapel. In her remaining 23 years she only left her house twice. She died at the house at the age of 92, August 12, 1933, due to a ruptured appendix.

The last member of the Crawley Family left the house in 1948 and the house would remain empty for more than a decade. There were several caretakers at the house, trying to keep an eye on things, but unfortunately, they couldn’t prevent the place from being vandalized. All the original furnishings were taken out of the house and sold. The house remained in its poor state until the Monte Cristo Homestead was bought by Reginald and Olive Ryan in 1963.

The Ryan’s restored the homestead back to what its original state. They turned it into a museum for tours, including a doll museum. And they have an antique store in it as well. Reginald died in 2014, but his wife Olive still stands strong. When the Ryan’s moved into the homestead, they immediately noticed something strange was going on. When they went up to the house with their belongings, including their cat and dog, they noticed the animals didn’t want to go into the house. In fact, they both ran away from it. And later, when they had an evening out, they noticed all the lights were on when they approached the house, but all the lights were off when they opened the front door.

The ghosts of Monte Cristo Homestead

The homestead is haunted by at least 10 ghosts. Some of them more prominent than others. One thing is for sure: the previous owners hated animals. And they hate them in the afterlife as well. When the Ryan’s came home one night, they found all their chickens strangled to death in their poultry run. Also, their parrot was choked to death in its cage. And a litter of kittens, raised in their breakfast room, were all brutally killed.

The ghost of the Crawley Family

Christopher Crawley’s ghost now haunts the room in which he died. His spirit is as kind as ever. His wife, on the other hand, hasn’t changed much after death. She still rules the house with an iron fist, judging everyone who dares to enter her house. If she doesn’t like you, she’ll try to scare you out with ice cold air falling on your skin.

The ghosts of the two maids

Christopher Crawley is said to have gotten two of his maids pregnant. One of them committed suicide by jumping to her death from the balcony. She was pregnant when she did it. She hit the stairs and was instantly killed. Her ghost still haunts the veranda, and a ghostly bloodstain marks the spot where she met her end. The second pregnant maid gave birth to a son. She named him Harold. When Harold was a young boy, he was involved in a terrible accident on the premises. Harold was hit by a coach. The child survived the accident, but sustained head trauma which disabled him for life. The poor boy was kept on chains in the coach room.

Local children would mock him because he would scream all day. They called him a monster and the children of Junee challenged each other to find and pester him. He was eventually put away in an asylum after he was found by the authorities, chained to his mother’s bed. She had passed away for a while. He died at the asylum, but still haunts the grounds of the homestead. He makes his presence known by the sound of chains.

The coach house is haunted by a young stable boy named Morris. He didn’t feel well one day and decided to stay in bed at the coach house. His master didn’t approve the fact the boy slept in, so he decided to teach him a lesson. He put the boy’s straw mattress on fire, thinking he would jump up and get to work. But Morris was too ill, and he couldn’t get up. He died in his bed. People hear his screams up until today.

The ghost of Ethel Crawley

Crawley’s infant granddaughter Ethel died in 1917, because the nursemaid dropped her on the stairs. She claimed she was pushed by an unseen force, but she wasn’t believed. Today, children who visit the museum become irritable and upset when they enter the stairs. Some guests say they feel as if they are being pushed on their backs. Some claim to feel an ice-cold tiny hand slip into theirs when they go to the upstair rooms.

The ghost of Jack Simpson

A more recent ghost is that of Jack Simpson. He was one of the home’s caretakers and at some point, he was shot to death in 1960 on the porch in front of the house by a young man. This man had been watching Alfred Hitchcock’s movie “psycho” three times before committing his crime. The words “Die Jack, ha ha,” were carved into the shed door, where they can still be seen today.

Lights still come on and off, guests experience the feeling of nausea, overwhelming sadness and some people even faint during tours. There are disembodied whispers and unexplained mists at the house. Orbs are seen all over and there’s some poltergeist activity as well.

The house has been featured on several paranormal television shows. It has been featured in Scream Test, Ghost Hunters International and My Ghost Story. You can visit the Monte Cristo Homestead on Friday to Monday from 10 am to 4 pm. Every Saturday evening, from 6 pm, there’s a ghost tour. Brave souls can even spend the night here. Would you dare to spend a night at this beautiful historic home?

Do you want to read more haunted stories about Oceania? Click here!