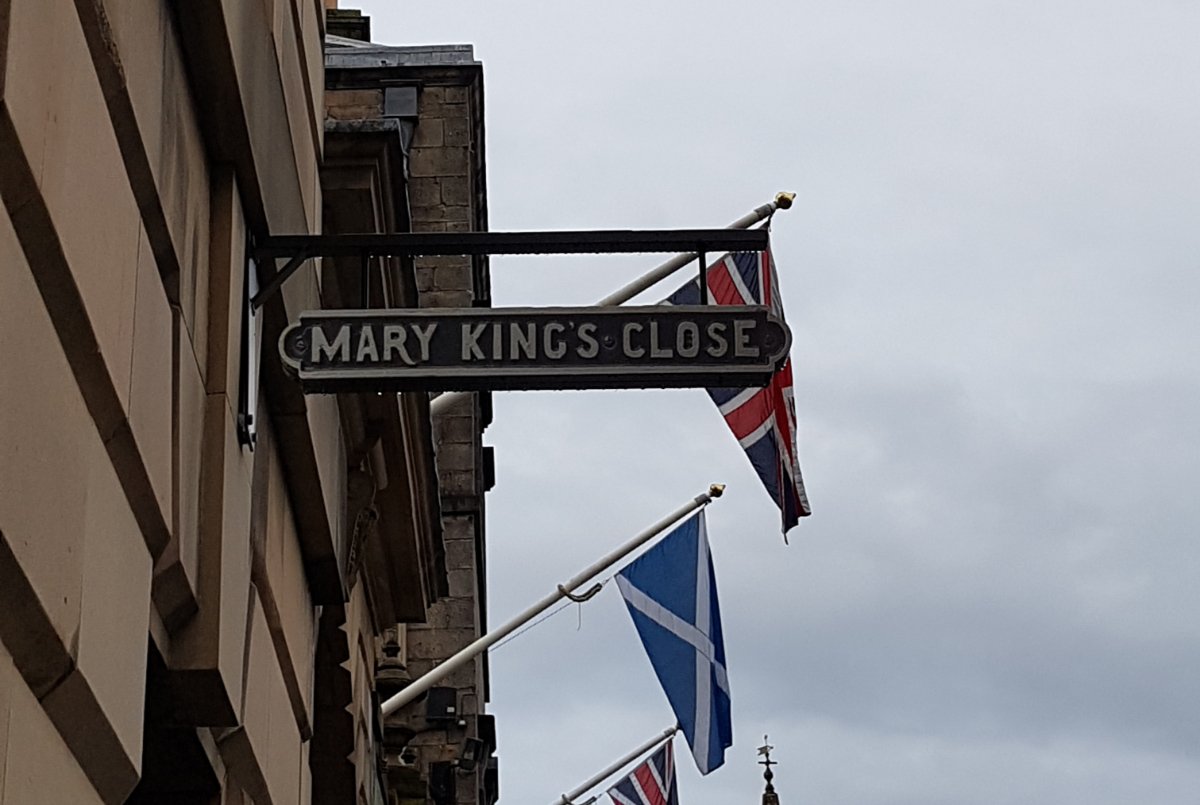 Underneath the streets of modern Edinburgh you can find and entire underground village. The Royal Mile, the historic street in Edinburgh, has many small alleys called “closes”. One of these closes is Mary King’s Close and this close not only has an interesting past, it’s also notoriously haunted. And I was lucky to visit this magnificent place in 2019.

The city of Edinburgh kind of grew around its impressive castle, Edinburgh Castle. By the 17th century, Edinburgh was the most populated city in Scotland. Back then, there was hardly any sanitation, so the streets were narrow, horribly dirty and it smelled awful. All the waste was simply thrown outside, where it would remain on street level. Houses were built vertically, some buildings were up to 14 stories high (!), making sure everyone had a house. The wealthiest people were lucky and were given houses on the top levels, the poor people had to live in the dirt.

How did the close end up underground?

A series of lanes and alleyways were formed in the crowded city and these so-called “wynds” and “closes” had gates to protect the residents from thieves (or worse) in the night. Most people lived in Mary King’s Close in the 16th and 17th century. Sometimes 21,000 at the same time! Today, Mary King’s Close is an underground village, but it wasn’t always like that. That happened somewhere during the 1750’s when the Town Council wanted to build “a covered place of exchange”. That would keep the merchants off the streets from around Mercat Cross and St. Giles.

The Royal Exchange was finished in 7 years. It cropped the tops of many buildings inside the Close and a vaulted ceiling was created, as we know it today. The merchants didn’t want their trade to be inside the exchange, so they continued outside. The Town Council later changed the Royal Exchange into the City Chambers for themselves.

Who was Mary King?

After her husband died in 1629, she and her four children moved into the close. Here, she rented a so-called turnpike house with a cellar. She also rented a shop on high street. As a widow she had to work very hard, but according to discovered papers she led a fairly comfortable life. When she died in 1644, her will was written up in a book, which was found many years later. And she had the close named after her!

Who lived at the close?

Mary King’s Close is actually a cluster of several closes, connected by small alleys and walkways. It’s very much like a labyrinth and it has 8 layers! The people who lived in the close were rich people like very successful merchants, lawyers and even doctors. They lived in the grand “high” houses. They owned a house which had several stories and a celler. The people who lived in the “low” houses was everyone from a tradesman to the very poorest. Some low houses were quite comfortable, but some were dark and lacked sanitation.

Funny fact: Sir Simon Preston, the Lord Provost of Craigmillar Castle owned a house in Mary King’s Close in the 16th century. He was one of the last people to have simpathy for the then fallen Queen, Mary. Mary, Queen of Scots spent her last night in Edinburgh in Mary King’s Close in 1567. She had just lost the battle of Carberry Hill. This was not a real battle but a series of negotiations, which she failed. Her every move was watched by guards, so it wasn a pleasant stay. She feared for her life because almost everyone wanted her dead. After that she was taken to prison in Loch Leven Castle.

The atmosphere and daily life

It’s difficult to imagine living in such extreme conditions as many did back then. I wondered what it was like living down there when I took the tour back in September 2019. The corridors were now lighted with modern day lamps, back then they used oil lamps with fish oil. The smell must have been horrible down there! And there was no such thing as indoor plumbing, either.

People threw their buckets filled with urine and feces down the street. They were allowed to do that only two times a day, before 7 am and after 10 pm. They had to call out the French words “gardez l’eau” (mind the water), but in Scottish it sounded more like: “gardyloo”! The ceilings are really low, the rooms cramped (you’d have to share with your whole family, so there was no privacy at all) and people even kept their stock inside the close!

Danger lies around each corner

The cramped, smelly streets and rooms were bad as they were, but one also had to be cautious all the time. Murderers, rapists, and thieves were also living in the close. But there were other dangers, too. Workshops, like the tanner’s, used horse urine for his leather making process, which was a danger to public health. Mary King’s Close was also located next to the Old Nor’ Loch, a heavily polluted swamp used for dumping rubbish. A poisonous biogas arose from the swamp, penetrating through the walls of the close. This gas caused hallucinations and produced a creepy greenish light, which was mistaken for ghostly apparitions. The first ghost stories from this place are dating back from the 17th century. Well, enough happened down there to awake a whole army of ghosts.

The Plague broke out

In 1644 Mary King (the merchant lady) died and four months later the Plague broke out in Edinburgh. Due to overcrowding within the city walls, the plague spread like and oil stain. Two types of plague actually hit the city; the pneumonic plague, also known as the Black Death, and the bubonic plague, which causes pus filled boils. If not treated these boils can grow the size of oranges. When these boils burst they could infect the victims blood, almost certainly leading to death.

When the Plague hit, 300 infected residents were sealed within the Close. This sounds barbaric, but was the only way to prevent more spreading. The sealed in victims weren’t left to die on their own. They were given food and ale each day and Plague Doctor George Rae was left with them for care. He wore a long, leather coat and birdlike beak filled with herbs to protect him against the illness. Rae saved many lives by cutting away the boils and burning the flesh. Painful but effective!

Nobody expected a Plague Doctor to survive, but George Rae did. The Council nearly passed out when they saw the large salary they owed him. Poor George spent 10 years fighting for his money. It is believed he died without receiving a penny. That’s really harsh. He was a hero, really.

The ghosts of the Close

Thomas Coltheart, a respected lawyer, and his wife moved into the Close in 1685. Their maidservant fled the place almost immediately, claiming the house was haunted. Later, Coltheart and his wife saw a man’s disembodied head floating through the house. Mrs. Coltheart fainted after seeing this and the apparition disappeared shortly after that. It returned back after supper with a child’s spirit and a severed arm which beckoned them. But that was not all!

A ghostly dog appeared, running through the living room, followed by a spirit cat and the whole room filled with weird little creatures, who they claimed, danced around prettily. A deep and dreadful groan filled the room and all ghosts and ghouls disappeared. I guess they must have slept quite peacefully that night… not! The dog also appeared on later accounts. It would curl up on a chair.

Another ghost at the Close is believed to be the ghost of its last resident, Andrew Chesney. He was forced to leave the Close in 1902 out of compulsory purchase. Andrew was especially proud of his “thunderbox”, also known as his toilet. He would leave the door open and he would wave at passers while he was doing his business. His spirit is seen as a worried looking man, wandering through the alleys.

The woman in black and others

Also, a woman in a black dress is seen on a frequent basis. She is believed to be the spirit of Mary King herself. Scratching sounds are heard inside the chimney, where a child sweeper supposedly died. People who were brave enough to have put their hands inside the chimney, got scratched. Footsteps and voices are heard throughout the entire Close. Sometimes an occasional stone is thrown. And then, of course, there’s Annie.

In 1992, a Japanese medium called Aiko Gibo visited Mary King’s Close. When the tour guide entered a particular room, she pulled back, claiming she couldn’t enter because “it was too strong”. Later she claimed having a heavy feeling of dread and someone tugging her trousers.  She later returned, alone, to figure out who caused this. Aiko found the spirit of a little girl, crying in the corner of the room. She told Aiko she couldn’t find her family and that it made her very sad. This girl (about 9 years old) was probably infected with the plague and abandoned by her family in fear of contamination.

She told Aiko she was also sad because she lost her beloved doll. Aiko bought the spirit, who is now named Annie, a doll and left it in her room. Many others followed her example, and now Annie’s Room is stuffed with dolls, puppets and stuffed animals from all over the world! The atmosphere in the room changed immediately and Annie promised not to bother anyone anymore, as long as she got to keep her doll. Once a year, all other puppets, dolls and toys are donated to the Sick Kids Friends Foundation. All except for the original doll.

Quite recently, the original doll (nicknamed Tartan Barbie) given by Aiko was taken from Annie’s room. A search was organised through social media under the hashtag #BringBackTheDoll”. Let’s just hope Annie will get her doll back soon.

After the Plague, life in the close continued as normal. After Andrew Chesney left, Mary King’s Close was sealed off again. The close was forgotten until it was rediscovered in 2003. You can take a tour there, organized by The Real Mary King’s Close where dressed up guides give you an impression about life underground. You need to make a reservation, because it’s very popular. I can really recommend the tour, it’s fantastic! So, if you ever get the chance, take it!

Thank you The Real Mary King’s Close for allowing me to use the fantastic pictures!