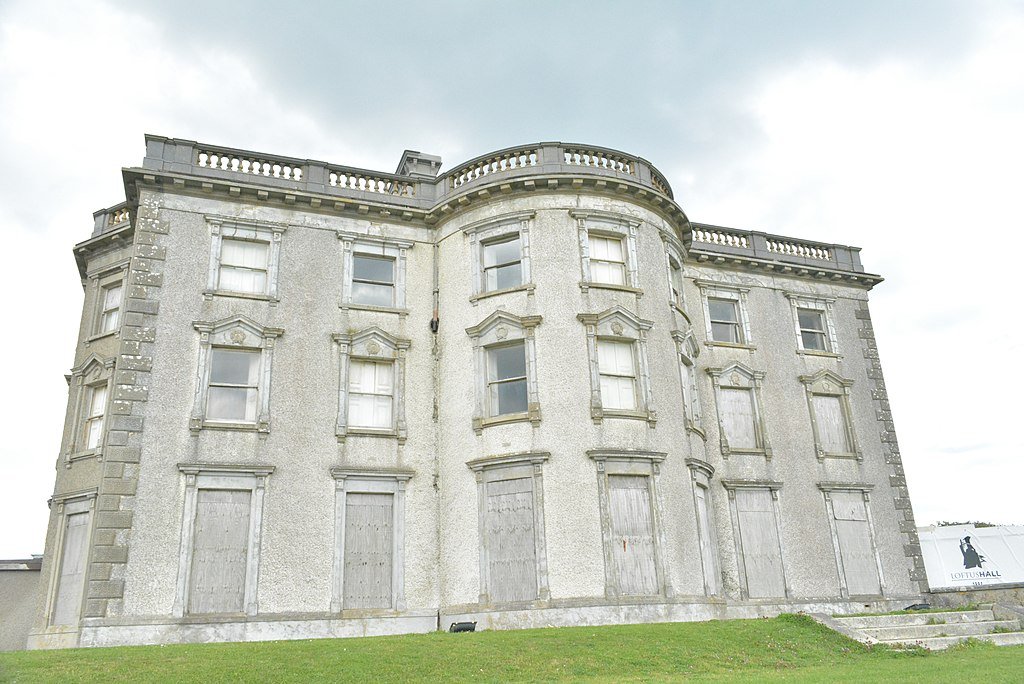 Loftus Hall is rumoured to be Ireland’s most haunted house. The large country house is built on the site where the original Redmond Hall was once located. People believe that the hall was visited by the devil himself. But his presence is not the only one that wanders the halls of this impressive building…

The history of Loftus Hall

A Norman knight named Raymond Le Gros, landed on the Irish Hook Peninsula, County Wexford in 1170. He claimed the land on which Loftus Hall now stands, and built a small castle there. He wanted to be included in Irish society and changed his name to Redmond. Redmond Hall, or simply The Hall, was built in 1350 during the Black Death.

In 1624, Redmond Hall was under attack by English soldiers. These soldiers were loyal to Charles I of England. The Hall’s owner, Alexander Redmond, made no secret of the fact that he supported the rebels during The Irish Confederate Wars (1641 – 1653). These rebels were Irish Catholics who tried to seize control of the English Administration in Ireland led by Charles I. Later, in 1649, Alexander Redmond had to defend his Hall again, but this time against the soldiers of Oliver Cromwell. He was already 69 by then.

Redmond died in 1650 or 1651 in The Hall. When he lived, Alexander Redmond had received favourable terms from Cromwell, but after his death, his surviving family were evicted from the Hall. They were only allowed to retain a third of their original estates in County Wexford.

The property and lands were shortly granted to a wealthy English family: the Loftus family. Later, the Redmond family had disputed the claim of the Loftus family in court. But without success. They had been compensated with lands in the Barony of Ballanghkeene in the north of County Wexford already in 1684. In 1666, Henry Loftus moved into The Hall. Then, it became the family’s principal residence. Henry Loftus had inscribed the words “Henry Loftus of Loftus Hall Esq. 1680” in stone at the portersgate. But, the name Loftus Hall wasn’t officially used until the end of the century. Before Henry Loftus declared the Hall his home residence, he carried out extensive repairs.

In 1800, the then owner of the Hall, was created Marquess of Ely. His descendant, the 4th Marquess, refurbished the old Hall by using the existing structure between 1872 and 1884. This resulted in the house as we know it today. It was during that renovation that they made a gruesome discovery. Inside the walls of the Tapestry Room, the skeletal remains of an infant were discovered. But, the haunting tales about Loftus Hall had already begun earlier.

When Loftus Hall was owned by Charles Tottenham, who had become lord of the manor by marrying the Honourable Anne Loftus, something disturbing happened. His wife Anne had died some time before and Charles re-married his cousin Jane Cliffe. Charles and Anne had 6 children together. One of these children, named Anne after her mother, still lived at Loftus Hall when a heavy storm stranded a ship on the shores nearby. This happened more often: the hall was near the shore, and often the people who were in trouble were invited inside to warm up, have something to eat and to get some rest. On this night in 1775, the sole passenger of the stranded ship was welcomed into the home. This mysterious stranger immediately made a huge impression on Anne.

A game of cards

Everyone in the house was fond of this stranger. He even stayed longer than just a day. One night, the family was playing a game of cards. The stranger dealt the cards, three cards each. Anne was only given two cards, but before she could mention this to the man, she saw that one card had fallen on the floor. When she picked the card up, she noticed the man had a cloven foot! Anne stood up from the table and shouted: “you have a cloven foot!” At that moment, the visitor went up through the roof, leaving behind a large hole in the ceiling. It is said that the hole was never really covered up.

Anne never recovered from her fright. She lost her mind and was locked away in her favourite room, the Tapestry Room. There she would gaze from the window all day long. She stopped eating and drinking and finally she died. It is said that Anne’s body was so stiff that she needed to be buried in a sitting position. The same position in which she died. People believe that the found infant remains were that of the child Anne had carried after a secret rendevous with the stranger. She and her parents were convinced the child was a devil’s child. The child either died by itself or they killed the child after it was born. After the child had died, it was hidden in the walls.

The ghosts of Loftus Hall

A priest named Father Thomas Broaders was hired to perform an exorcism at Loftus Hall in the 18th century. He said he sensed a demonic presence at the house. It is believed that this presence has always lingered there. People have claimed they had an uneasy feeling while being in Loftus Hall, some heard strange noises and voices, orbs have been seen and some even claim to have heard horses inside the house. There has been some serious poltergeist activity and some people have suffered panic attacks while they visited. Anne’s ghost is said to wander the halls and her image has sometimes showed up in photographs.

The many owners of Loftus Hall

Loftus Hall has had a long history of ownership. When the 4th Marquess died at a young age, the manor was in a bad financial state. It was inherited by his cousin who decided to place it on the market. In 1917, Loftus Hall was bought by the Sisters of Providence and it was turned into a convent and school for young girls who were interested in joining the order. Kay and Michael Devereaux bought Loftus Hall in 1983, and they turned it into the Loftus Hall Hotel. The hotel was closed in the late 1990’s.

In 2011, it was purchased by the Quigley family, who restored the hall and turned it into a tourist attraction. Ghost tours were given and paranormal investigators were invited to look for evidence. Ghost Adventures also visited Loftus Hall in this period. It was put on the market again in 2020 and bought in 2021, by an unknown buyer. What will happen to Loftus Hall is still unsure. Hopefully it will be open to the public once more, but

Do you want to read more stories about haunted places in Europe? Please click the link.