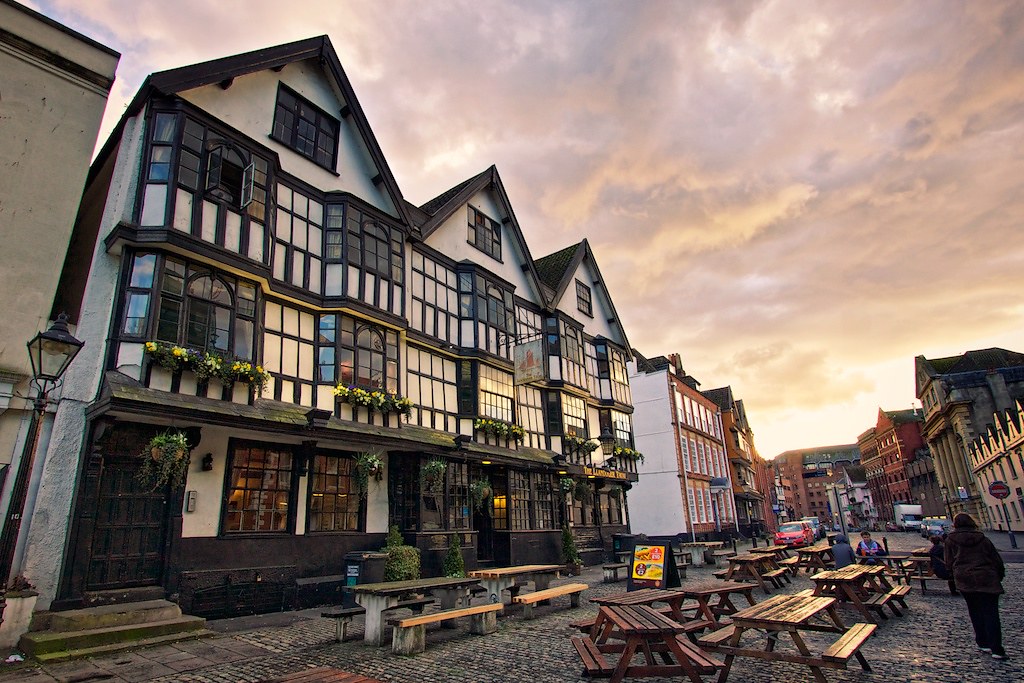 Llandoger Trow is a Tudor-style public house and pub in Bristol, England. The pub is located near the old city docks and therefore always associated with seafarers and pirates. Llandoger Trow has been the inspiration to many classic stories, but has many stories to tell on its own. No less than 15 ghosts are said to haunt this pub!

The history of Llandoger Trow

In 1664, a sailor by the name Captain Hawkins, decided to retire and exchange his long life at sea for a life on land. He opened a pub and named it Llandoger Trow. Llandogo (Wales) was the place where he was born. The small village (Welsh: Llanenddwyn) was only 20 miles from Bristol, and famous for building trows. These are flat-bottomed trading boats. In the Victorian era, the pub was associated with the Theatre Royal (not to be mistaken with the Theatre Royal in London), which is across the street.

During WWII, the Llandoger Trow was heavily damaged by a bomb. Two gables were completely destroyed. Fortunately, the gables were able to be restored into their former glory. In 1962, the pub became a Berni Inn (a chain of British steakhouses). Sadly, in April 2019, it was closed. People feared it was permanent. But, in 2020 it was re-opened as part of the Bloomsbury Leisure Group.

The Llandoger Trow has been an inspiration to at least two great novelists. Daniel Defoe met a man named Alexander Selkirk in the pub. He told him he was a Scottish privateer who was shipwrecked and spent more than four years on an uninhabited island as a castaway. Defoe was so impressed that he wrote his novel Robinson Crusoe in 1719. Another novelist who was inspired by the Llandoger Trow was Robert Louis Stevenson. In 1882, he wrote about the Admiral Benbow Inn with this pub in the back of his mind. And perhaps even The Spyglass, the Bristolian inn run by Long John Silver was inspired by the Llandoger Trow. These two places are mentioned in his novel Treasure Island.

Blackbeard was a regular

Edward Teach was a regular customer of Llandoger Trow. He’s better known as the infamous Captain Blackbeard (1680 – 22 November 1718). Blackbeard died in battle, where he sustained twenty-five injuries. Five of which were inflicted by guns. Perhaps he is one of the many ghosts that haunt the piub.

The ghosts of Llandoger Trow

The historic pub is haunted by no less than 15 ghosts. In 2007, the crew from Most Haunted Live! visited the pub and they concluded this. One of the most famous ghosts is that of a young disabled boy named Pierre. Some claim Pierre was murdered in the pub. His crippled legs were in braces and that’s why he’s limping around. In fact, the sounds of his footsteps are very distinctive because of his disability. They sound as if someone is dragging a leg along. Soft cries are also heard coming from the top floor. He is heard walking throughout the entire building, has been seen ascending the staircase and has even been spotted outside in the yard.

Other ghosts in Llandoger Trow

Little is known about the other ghosts in the pub. People have reported feeling cold spots in the Jacobean Room and the cellar. An interesting detail about the cellar: in 1962, the remains of a tunnel was discovered underneath the pub, connecting the pub’s cellar to a whole underground network. Unfortunately, these tunnels are now destroyed. At least two apparitions have been caught on CCTV camera’s after hours. And beware of the violent poltergeists that reside in the pub. They like ripping pictures off the walls and throwing around cutlery around in the kitchen.

The pub is back in business once more! Since 2009, (overnight) ghost tours have been organized. This is no doubt the most haunted location in Bristol. And even if you don’t believe in ghosts, the history of the place is incredible!