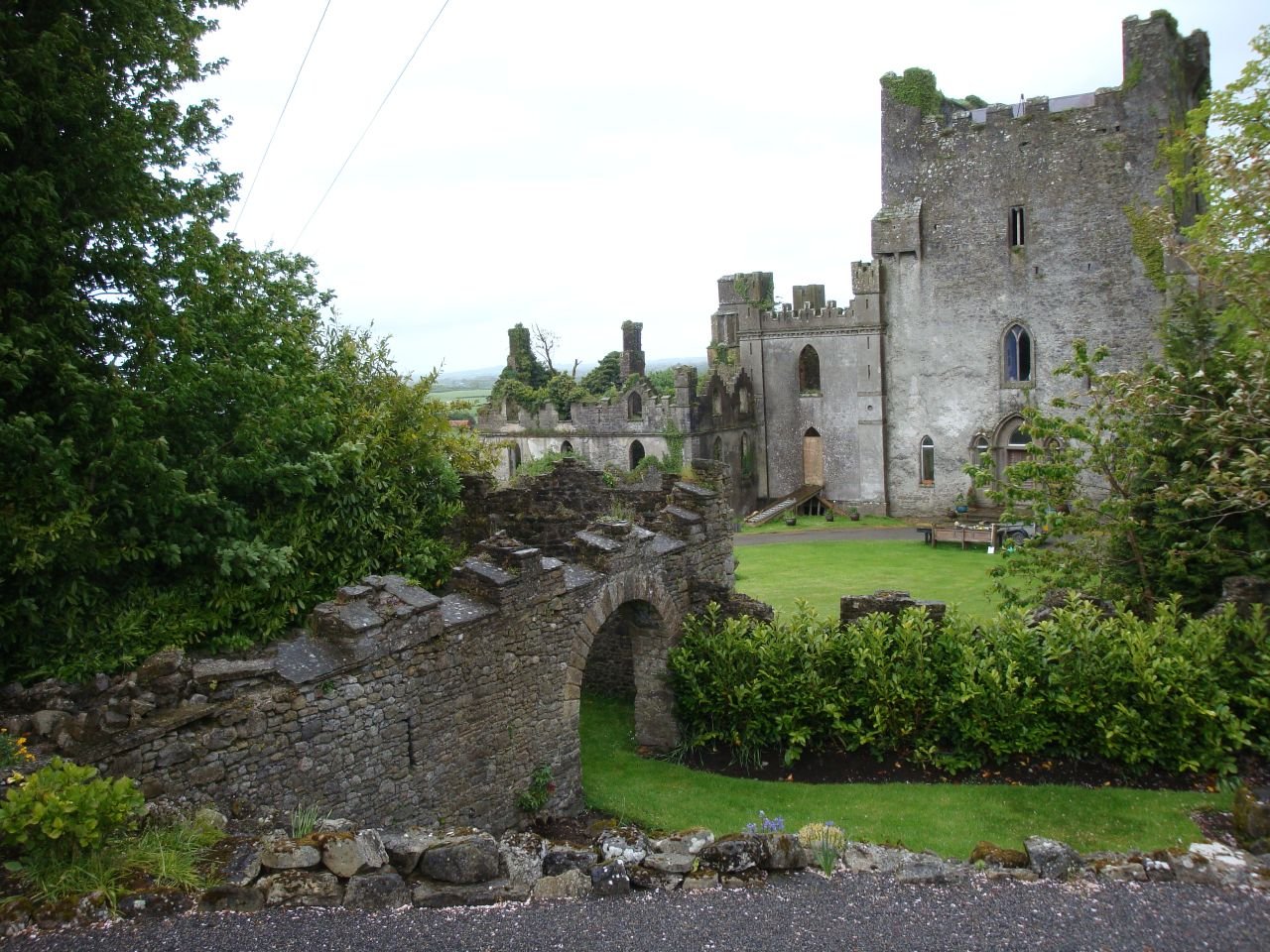 About 2 miles (3 km) from the Irish town Rocrea, you can find Leap Castle. This castle was built somewhere around 1250 and was inhabited by the much-feared O’Carroll clan. But that’s not the only thing that makes this castle so infamous. Through the centuries this castle has seen murder and death. No other place in Ireland can beat the number of ghosts that reside in this place.

The history of Leap Castle

The history of Leap Castle is a bloody one even before the castle was built. Two brothers of the O’Bannon clan challenged each other for the leadership of their clan. They were to leap off the rock where the castle was to be built. The surviving brother would claim the leadership as well as the new castle. This all happened around 1250. The castle was named “Léim Uí Bhanáin”, or “Leap of the Bannons”. The O’Bannons were powerful in the area but were the subject of an even more powerful clan: the O’Carroll clan.

The O’Carrolls liked the castle, so they simply took it from the O’Bannons. The O’Carrolls managed to keep the castle until 1649, when the castle passed to the Darby family by marriage. But the O’Carrolls had to defend the castle against others during their reign. In 1513, Gerald FitzGerald, Earl of Kildare, tried to seize the castle. Without success. He tried again three years later. During this attempt part of the castle was ruined. But this is not why it is so haunted today.

In the 17th century, the ownership of the castle passed on to the Darby family. One of the O’Caroll daughters married the English Captain Darby. Their son, Jonathan Darby, hid his treasures in the ground on the castle’s premises during the English Civil War. He made sure his secret was kept by killing the two men who helped him bury his treasure. Later, he was imprisoned for treason. When, after his release, he returned to the castle, so much had changed he couldn’t find his treasure back. Until this day, nobody knows where the treasure is hidden.

Blood on the altar

The walls of this castle have seen their share of violence, but the most gruesome murder committed here, was committed in 1532. This murder took place in the castle’s chapel, which now is referred to as “The Bloody Chapel”. Mulrooney O’Carroll (the clanleader back then) died that year and there was much disagreement on who would be his next successor. Officially, Thaddeus O’Carroll, Mulrooney’s next of kin and priest of the O’Carroll family, would take the lead, but he never got the chance. Younger brother “One-Eyed” Teige O’Carroll, pushed his blade in Thaddeus’ back during Mass. Thaddeus bled to death at the altar in front of his entire family. His ghost still haunts the chapel and he frequently lights the room.

Skeletons in the closet

Thaddeus is just one of the many ghosts of the castle. In 1922, workman made a gruesome discovery in a hidden dungeon behind a wall of the Bloody Chapel. There, in the floor, they found an oubliette. An oubliette (from the French word “oublier”, which means “to forget”) is a deep hole in the ground where prisoners would be thrown into and were simply forgotten. No less than three cart loads of human bones and skeletons were removed from it.

Over 150 human remains were discovered. Along with these skeletons, a pocket watch was found. It was dated back to the mid 1800’s, so the oubliette was used quite recently. The bodies were impaled on long, wooden spikes, which were sticking up eight feet below. Let’s just hope these unfortunate souls died instantly. Visitors sometimes feel the overwhelming urge to throw themselves down the oubliette.

But that’s not all. The O’Caroll’s hired about 40 members of the McMahon clan to train them into new war techniques. The O’Caroll’s won a battle because of their training, so they decided to throw the McMahons a feast to thank them for their help. But the food they were given was poisoned. Just so the O’Caroll’s didn’t have to pay then. This shows how brutal this clan was back then. Of course, the McMahon’s still roam the castle.

There is secret room inside the castle which is referred to as the Murder Hole Room. You’d say a Murder Hole is the oubliette, but it’s not. This room’s location is kept a secret. Legend says another member of the O’Carroll family was murdered here by another relative. This room is said to be incredibly haunted as well.

Other spirits that roam the castle

There are many more restless souls that are lurking the castle and its grounds. Some friendly, some tragic and some malevolent. Owner Seán Ryan knows them all. When he and his wife bought the castle in 1991, he wanted to restore it. But the ghosts didn’t agree. He was pulled off a ladder twice (and got hurt) and various other accidents happened to him. He decided to call upon the spirits telling him he wanted their home to be restored and that they could stay. After that, things got better.

The friendly ghosts of Leap Castle

An old man is frequently seen in an armchair near the main hall’s fireplace. Little is known about him, but he is harmless.

The Main Hall is also the domain of two little girls, although they are also spotted in other spaces of the castle. These are the spirits of Emily and Charlotte. Emily died at the age of 11 after falling from the castle’s battlements. People claim to see a young girl falling from great heights and disappearing right before she hits the ground. Charlotte is seen limping. She seems to have suffered from a deformed leg. Alongside these girls, another spirit is often seen. She is referred to as the Governess. She takes care of them. They probably all lived in the 16th century.

A monk haunts the Priest’s House, which was built in 1571. This house is a ruin since it was destroyed by fire in 1922 during the Irish Civil War. Before the fire, people were able to spend a night here. People who slept in the Priest’s House claim something very heavy (like a heavy body) was with them in their beds and it was even snoring.

A ghost also resides in the oubliette. He does no harm, but sometimes takes a walk in the lower parts of the castle.

And a terrified, scantily dressed woman is seen frequently as well. She screams twice before disappearing. Her screams are blood-curdling but she harms no one.

The tragic ghosts of Leap Castle

The spirit of the murdered O’Carroll priest haunts the Bloody Chapel. People claim to see light streaming from its windows, even though there’s no electricity here. He’s also seen on the staircase. Sometimes the smell of burning rubber is smelled there.

The Red Lady is a terrifying and yet tragic ghost. She is often seen in the Blue Room, which used to be a nursery, but she’s also seen in other parts of the castle. The Red Lady wears a long, red dress, is tall and lean and she has long brown hair. She is always seen carrying a dagger which she raises as if she’s ready to stike. There are two legends concerning this ghost. The first legend says she was a rape victim of one of the O’Carrolls. She got pregnant by him. When the child was born, the O’Carrolls killed the baby with a dagger. In this version, she managed to take the dagger and kill herself with it. In another story, she tried to flee the brutal O’Carrolls. She was chased and eventually stabbed to death.

Mildred Darby, I’ll get to her later, saw the Red Lady crying in the Blue Room.

Leap Castle also houses a dark, ancient entity, called an Elemental. This entity has never been human. Before the castle was built, the land belonged to Druids. The land was very fertile, so it was of great importance to them. The Druids might have called upon an Elemental for protection for their sacred land. Others say, Gerald FitzGerald called upon the Elemental to curse the O’Carrolls. The Elemental has powers to destroy the castle from within. The castle was partly demolished at FitzGerald’s second attempt. The Elemental doesn’t show itself unless it’s challenged. It was last seen in 2006. Mildred Darby (1867 – 1932) also claimed to have seen the Elemental. She used to perform black magic.

Mildred Darby started practicing black magic while she lived at the castle. This unleashed the primitive Elemental entity. An Elemental is unpredictable and terrifying. In 1909, Mildred gave an interview to a magazine called “Journal Occult Review” in which she claimed: “I was in the Gallery and looked at the floor when I suddenly felt a hand on my shoulder. The thing had the size of a sheep and it was thin and shadowlike. The face was human, and it was not. His decomposed eyes showed some kind of lust. At that point I smelled a horrible smell, which made me ill. It was the smell of a decomposing body”. Mildred lived to tell about it but be warned: don’t ever challenge the Elemental.

Leap Castle was burned and partly destroyed in 1922 by Irish civilians, because the castle was in English hands. The Darby’s left the castle because of this. It remained a ruin until musician Seán Ryan and his wife Anne bought it in 1991. Sean rebuilt the castle based of pictures from before the destruction. The Ryan’s have seen many spirits over time, but fortunately never laid eyes on the Elemental. They live in harmony with the many spirits of the castle. You can visit the castle daily except for Sundays. Please contact Seán before you go. Happy ghost hunting!

Many thanks to the Paranormal Searchers Ireland for letting me use their picture of the Bloody Chapel!