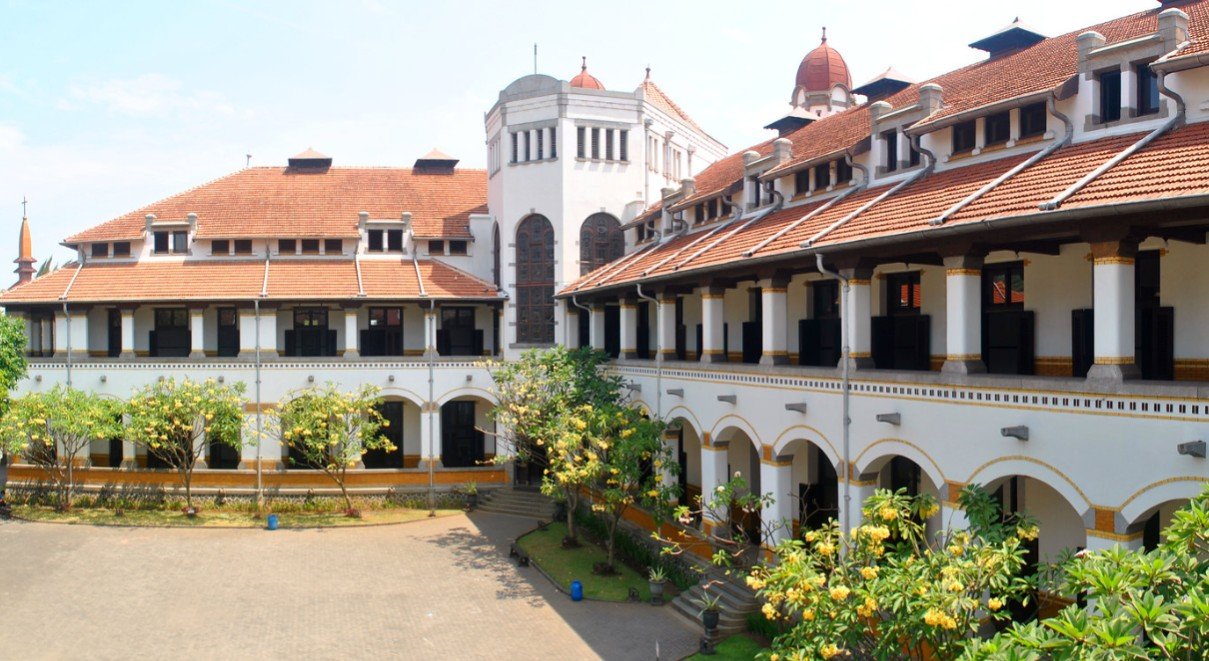 In the city of Semarang, on the Indonesian island Java, you can find Lawang Sewu. This beautiful Indonesian landmark was once home to the Dutch East Indies Railway Company. Horrible things have happened here during and after WWII. No wonder it’s incredibly haunted. There are even rumors that the building’s haunted by a Kuntilanak. But that doesn’t keep the tourists away.

The history of Lawang Sewu

In 1904, the construction of the main building of Lawang Sewu, Building A, began. This is an impressive L-shaped building that has two four story towers on each side, which were used as water tanks at first. This part was already finished in 1907, but the construction of Building B took some more time and wasn’t finished until 1919. This was probably caused by the construction of a massive basement which could be filled with water, serving as an air conditioning device.

Lawang Sewu is the Javanese word for “thousand doors”. There might not be a 1000, but there are many doors, arcs and about 600 huge windows. The labyrinth-like building seems mysterious to many. Building A can easily be mistaken for a church, complete with glass stained windows. However, these windows don’t tell biblical stories, they tell the tales of railroad success and Dutch ingenuity.

As you perhaps know, I’m not proud of the things Dutch people have done in the past, so bear with me. The Dutch had been around in Indonesia for centuries, so when a railway was to be built in Indonesia, they chose Semarang as the headquarters for their administration office.

The Dutch colonials really got in trouble during World War II, when the Japanese invaded Indonesia. They took over Lawang Sewu and turned the basement in Building B into a prison. Many Dutch colonials were imprisoned, tortured and even executed here. People claim the Japanese decapitated prisoners and threw the severed heads into the corner of the basement.

In 1945, when the Japanese army was forced out of the country, the Indonesian Government took over the complex and re-named it the National Railway Company. The Dutch, however, snuck back into the building, using the underground tunnels. A five-day battle took place, killing many Indonesian people, as well as five railway workers inside the building. But the Dutch colonials didn’t stay long.

The white paint started to flake, nature was taking over and mice, rats and black mold were the only living residents of Lawang Sewu. People knew its gruesome history and now it even started to look like a haunted house. Brave men challenged each other to explore the building and even to spend a night here. The Indonesian Government saw the decay and neglect of the building and started making plans for renovation. Lawang Sewu was declared as Cultural Property of Indonesia in 1992. Building B opened up to the public first. Plans for new offices, a food court and a gym were made, but it had to get rid of the stubborn ghost stories first.

The ghosts of Lawang Sewu

The Indonesian Government feared that tourists were afraid to enter Lawang Sewu because of the ghosts, but the numbers say otherwise. No less than 1000 visitors visit Lawang Sewu each day! The ghost stories might even attract people instead of scaring them off. The ghost of a Dutch woman is often seen. She is said to have taken her own life at Lawang Sewu. The basement still is a creepy place. People feel uneasy and there are claims of headless ghouls that are unable to find peace. The spirit of a headless Dutch woman is also said to haunt this area. She was allegedly killed by the Japanese Army during the war.

There is also an urban legend connected to Lawang Sewu. A Kuntilanak or Pontianak is said to haunt the building. This is a vampiric manifestation of a woman who died during childbirth. These creatures look like pale-skinned women with long black hair. Kuntilanak ghosts have red eyes and wear white dresses which are smeared with blood. Legend says they are able to change themselves into beautiful humans and prey on men and helpless people.

Getting rid of a reputation is hard when that reputation kicks you in the head every time. In 2007, a horror movie was released titled: Lawang Sewu, Dendam Kuntilanak. In this movie, a group of high school students from Jakarta come to Lawang Sewu to party. But instead, they are locked in and must fight the ghost of a Dutch woman, the ghost of a chained man and, of course, the Kuntilanak.

Lawang Sewu is open to the public and it’s well worth the visit when you are near. Please note that the building is closed on Wednesdays. If you catch a ghost on your camera, please share!

Do you want to read more stories of haunted houses in Asia? Click here!