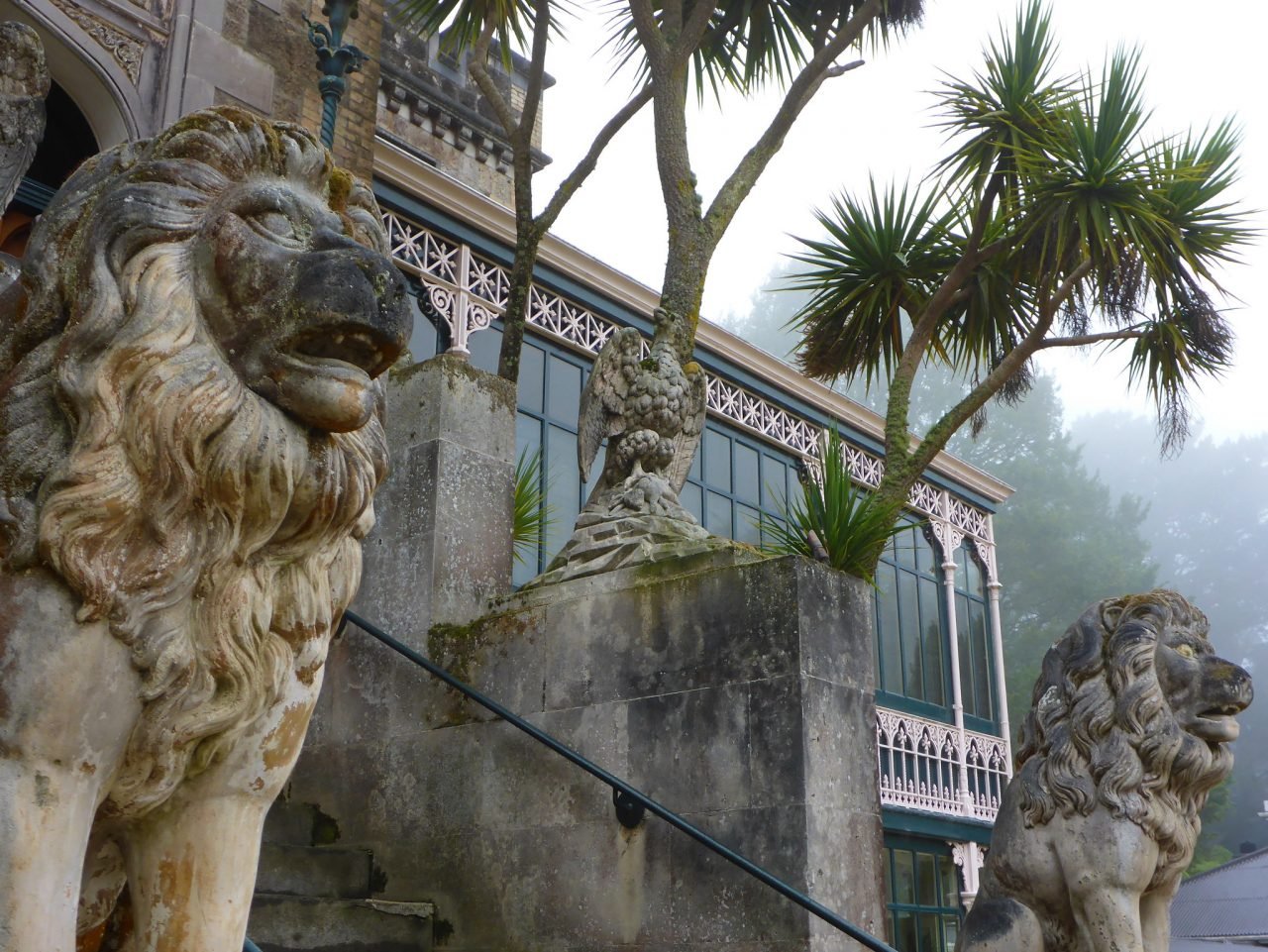 Larnach Castle is often referred to as New Zealand’s only castle. In fact, the 25-room Gothic building is an historic house, also called a mock castle. It’s located on the ridge of the Otago Peninsula near Dunedin. Larnach Castle has a magnificent view: you can even see the Pacific Ocean from here! But, this was never a happy place.

Larnach Castle (or simply the Castle) was built in 1871 by a man named William James Mudie Larnach. He was a merchant baron and politician. Larnach started his career as a banker in Melbourne. He followed the gold rush to the Australian goldfields in Ararat, where he was manager of the Bank of New South Wales. His bank building was a tent and all he was equipped with were a dog, a gun and some boxes. He did really well and this was noticed by his superiors. He was offered a new job in Dunedin where he went in 1867. One day, he went horse riding with one of his sons and discovered a spot on the ridge of the Otago Peninsula. This is where he wanted to build his dream home.

The History of Larnach Castle

Before the construction of the house could begin, the land needed to be levelled. Pegs were put into the volcano rock and salt water was poured in so that the rock could split. It took three years and 200 workmen to build Larnach Castle. It was completed in 1874. Then, he hired some skilled European craftsmen to embellish the interior. This took another 12 years to complete. Materials from all over the world were used: marble from Italy, floor tiles from England and glass from Venice and France. In 1885, a 3,000 sq ft ballroom was added. This was a birthday gift to his favourite daughter Kate, who turned 21.

William Larnach wanted Larnach Castle to be a happy family home, but tragedy struck. His beloved daughter Kate died of illness in her 20’s and he lost his first wife Eliza at the age of 38. Their youngest daughter was just a baby. Larnach married his late wife’s half-sister, but she too died at the age of 38. His third wife, Constance, was much younger when he married her. There are rumours that she cheated on Larnach with his own son. But, there were other problems. William Larnach went into politics a few years earlier, but never really let go of his banking skills. In fact, he started speculating. When Larnach was accused of dishonourable dealings he thought it was enough. He committed suicide in New Zealand’s Parliament Building in October 1898 by shooting himself in the head.

When Larnach died, he died without leaving a testament. Five of his children were sent to England for their education. This meant long sea voyages and a lot of time being from home and away from family. This had already torn the family apart, and the death of William didn’t improve this. In fact, it got worse. Eventually, Larnach Castle was sold in 1906 and it has had many owners and purposes since.

After Larnach Castle was sold by the family, it was briefly turned into a lunatic asylum until 1918. Here, people with mental disorders and shell-shocked soldiers were treated. After 1918, the Castle was abandoned and was left to decay (the ballroom was briefly used as a sheep holding pen!) until it was bought by a man named Jackson Purdie in 1927. He used the Castle as a showplace for antiques. When his health started to deteriorate, Larnach Castle was auctioned and bought by Mr. Armstrong. During WWII, over 80 US soldiers were billeted here. After the war, the Castle found a new owner, but it was in ruins by the time the current owners bought it: the Barker family.

Larnach Castle was bought by the Barker family in 1967. They were on road trip on the South Island and fell in love with the place. The first few years at the Castle were quite challenging. Larnach Castle was in ruins. The roof was leaking, entire floors were missing and there was a lot of decay. This didn’t stop the Barker family from restoring the place. They even searched (and found) a lot of the original furniture! By opening it to the public, they are able to keep restoring Larnach Castle. But, beware of the ghosts when you visit!

The ghosts of Larnach Castle

The Castle is haunted by several spirits. The current owners are aware of this, too. Halloween parties and Victorian Ghost Story events take place every year. Even though the spirits aren’t violent, they’re not always amused with all the visitors invading their space. A couple got pushed apart while entering Constance’s Room. Her wedding dress is on display here as well as many of her Victorian toiletries. The room is also much colder than the other rooms in the building. Some think it’s the spirit of Constance who still haunts her former room. Others think it’s Eliza’s spirit who’s angry because another woman took her place.

The ghost of William Larnach

William himself is said to haunt his former dream home. A male figure has been seen around the castle. It makes sense it is him. Poor William’s remains were disturbed in the family crypt in Dunedin. His skull was even stolen as a trophy. In 1972, William Larnach’s skull was found in a student’s dorm. The student showed the skull, complete with hole in the head, to his friends on many occasions. He wasn’t prosecuted because he didn’t vandalise the skull and he wasn’t the one to disturb Larnach’s bones. Even though the skull was taken back to the crypt, it did upset Larnach’s spirit. Poor man.

In 1994, one hundred were invited to the ballroom of Larnach Castle to witness a play called “Castle of Lies”. When the performance started, a strong and not predicted storm started outside. The wind was so strong it blew right into the fireplaces, causing small white particles to be blown into the ballroom. Hail began to crash onto the iron roof loudly and when the performers got to the part where William Larnach shot himself, a flash of lightning shot through the room. Many guests thought it was part of the play, but it was not.

Other ghostly phenomena at Larnach Castle

There is a lot of energy at Larnach Castle. Doors are opening and closing on their own, people feel as if they’re being watched and some guests feel as if they are being suffocated in one of the bedrooms!

The Castle and its gardens are a much-visited tourist attraction today. Tours (guided and self-guided) are provided. The gardens are not original, but they have been designated “Gardens of International Significance” by the New Zealand Trust. Larnach Castle is open to the public 7 days a week and you can even spend the night. There are three accommodation types: Larnach Castle Stables, Larnach Castle Lodge and a nearby luxury accommodation Camp Estate. That is… if you dare to spend the night here!

Christ Church Cemetery in Oistins, Barbados, was the site for a string of unusual events in the early 19th century. The mysterious events all seemed to evolve around one vault. The Chase Vault. The tomb belonged to the Chase family, a rich family with at the head Colonel Thomas Chase, a man so vicious, that […]
Chillingham Castle is said to be the most haunted castle in England. More than 100 ghosts are said to haunt it. It was built as a monastery before 1246, later transformed into a castle. You’ll find the castle in Northumberland, near the Scottish border. King Edward I used the castle as an accomodation in 1298 […]
Blarney Castle, or Caisleán na Blaran, is an Irish medieval stronghold in Cork, Ireland. Today, the castle is a very popular tourist attraction. Especially the Blarney Stone, which everybody wants to kiss. But keep your hands to yourself, and don’t even think about removing a stone from its terrain. You will be very sorry if […]