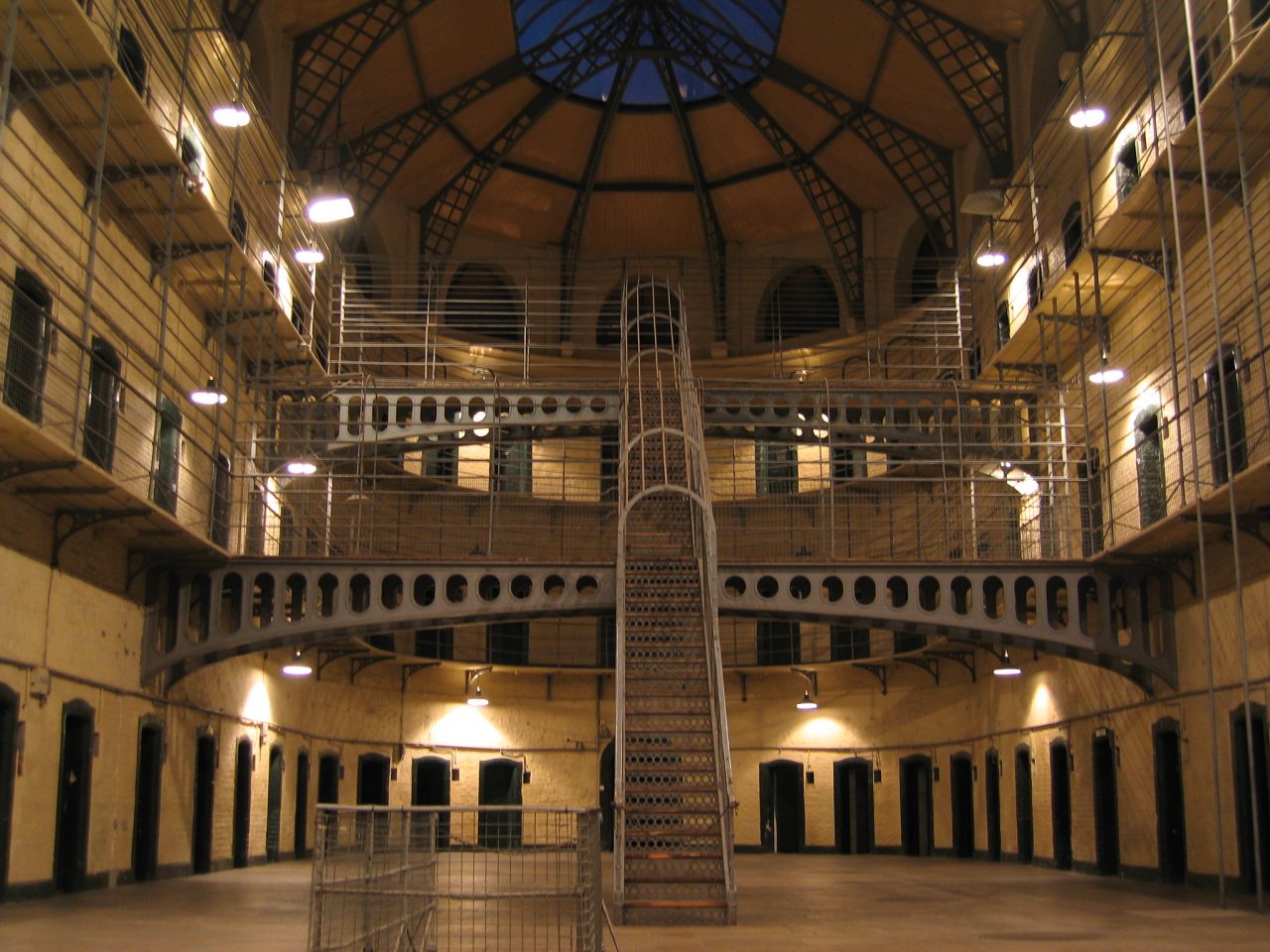 Kilmainham Gaol is a former prison in the Dublin suburb Kilmainham. This prison was often referred to as the Irish answer to Alcatraz. Many Irish freedom fighters were imprisoned and even executed here when the English had the power over this country. Nowadays it’s a museum, visited by many each year, but some prisoners never leave.

The history of Kilmainham Gaol

Kilmainham Gaol (in Irish: Príosún Chill Mhaighdean) was built in 1796 to replace the older prisons in the area. Back then, prisons were overcrowded, so the new prison was built as a response to the poor conditions. However, this prison, which was simply named New Gaol, shortly faced the same problems. As a result, men, women and children were placed together. The youngest convict was only 7 years old. People were sent to prison for small crimes like stealing food, but murderers and rapists were held in the same cells. To prevent illness due to poor hygiene, the gaol was built against a hill. Ventilation was the answer against germs, so they thought, so the wind could freely play with the convicts inside. Five people were to live in a small cell, given just one candle every two weeks for light and warmth. Can you imagine what it would have been like?

Prisoners also worked at Kilmainham Gaol. Men were put to heavy labor, like breaking stones in the Stonebreakers Yard, equipped with nothing but their own bare hands. Women were put to work in the laundry room or cleaning the cells. Children, who were sentenced to more than two weeks, were given weekly school lessons by the chaplain. Mothers, who had babies under the age of 12 months, kept the babies with them. Women were far worse off than men. When the bright and airy East Wing was built, the men were transported there. The women were to stay at the darker and older West Wing. Your social status was also a factor in how you were treated at Kilmainham Gaol. Rich and prominent? Then you’d have a comfortable cell including your personal belongings. And you had free interaction with visitors as well.

Some people wanted to be imprisoned

During the Great Famine years, food was so scarce people wanted to be put in jail. At least they’d be fed. Food rations per criminal were very low but became even less when the prison management figured this out. Due to overcrowding, other measures had to be taken. Some adult prisoners were sent on penal transports to work at penal colonies in Australia. Why Australia? Because that was remote. Men were to work at farms and women in workhouses. If your sentence was served, you were free and able to return home.

Political prisoners were also kept in Kilmainham Gaol. If you would fight for independence, you risked being jailed. Or worse, for the death penalty existed in Ireland back then. In the beginning, executions were held right outside the goal where the public could witness it. Most of the executions were done by hanging. Later, a small cell was built inside the prison where the executions took place. In 1916, a couple of leaders of the Easter Rising were executed in the Stonebreakers Yard by a firing squad. One of the leaders, James Connelly, was so badly injured he couldn’t even stand up. He was executed sitting on a chair near the entrance of the yard. A lone cross now stands on that precise spot.

The 1916 uprising and the way the leaders were executed, were the beginning of Irish independence and the ending of the prison. So many opposed to the fact the leaders were executed, that the rest of the prisoners who were involved with the Easter Risings, were pardoned of their executions. The prison was eventually closed in 1924. Kilmainham Gaol was looked upon as a place of suppression and suffering. In the 1920’s there were even plans to re-open Kilmainham Gaol as a prison, but this plan was cancelled in 1929 due to all the opposition. Demolishing the place, as was the plan in 1936, was too expensive. So, it was left to decay until 1960.

In 1960, it was decided to open the facility again, this time as a symbol of Irish Independence. It took over 11 years to get rid of all the overgrowth and renovate the place. It was opened to the public and turned into a museum. It was also featured in movies, like The Italian Job, The Whistleblower and Paddington 2 (yes, that’s right), and even in U2’s videoclip “A Celebration”.

The ghosts of Kilmainham Gaol

A place that has seen so much sorrow, fear and death must be haunted. And it is. During the restoration alone, countless sightings of ghosts were reported. Governor Dan McGrill stayed at the prison with his family to keep an eye on the restoration work. His room was right opposite to one of the chapels. He saw the lights were still on, so he walked up there to switch them off. When he was back in his room, getting ready for bed, he saw the lights were on again. This happened countless times after this. A psychic later claimed there’s an evil ghost hiding in one of the chapels. Perhaps this is the spirit of Easter Rising leader Joseph Plunkett, who got married to his love Grace Gifford in the Catholic chapel just hours before his execution.

Many workers claimed to have heard footsteps and disembodied children’s voices in the corridors. One worker had a very frightening experience while repainting the dungeon. He claimed to have been thrown through the air by a sudden gust of wind, crashing him to the wall and pinning him there for a while. A group of school children refused to enter the prison because they saw something creepy beyond the threshold. Unseen forces push people over who visit the museum. People feel as if they are being watched and there are unexplained bangs and noises.

Kilmainham Gaol provides guided tours only. The best thing to do is to book your tickets in advance because it’s a very famous tourist attraction. Haunted tours are also available. It’s a very interesting place with a very interesting history. A real must-visit while you’re in Ireland!