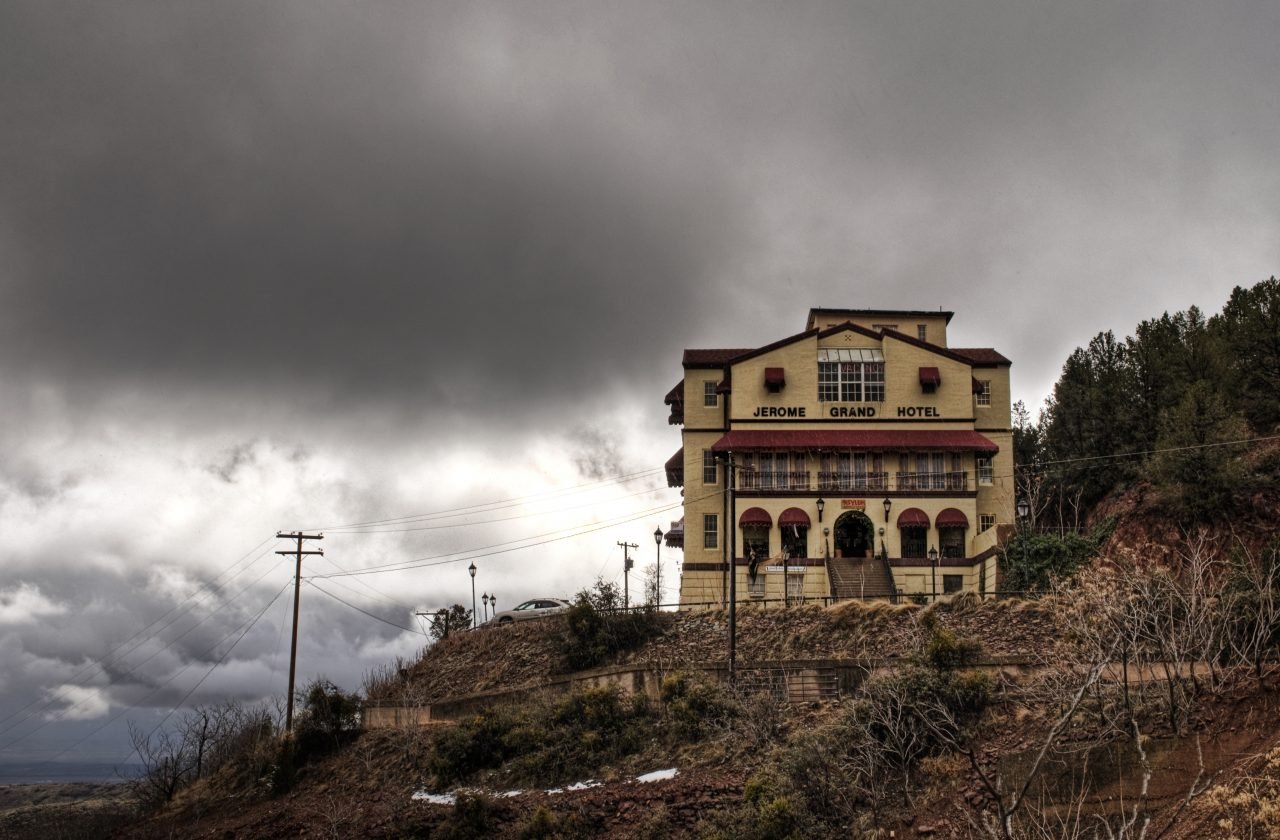 The Jerome Grand Hotel in Arizona, USA, is a historic landmark which towers above the Verde Valley. It was built in 1926 and served as a general hospital until 1950. Then it was abandoned for 44 years. In 1994, a new owner was found, and it was converted into a hotel, which still operates today. But, sleeping here might be challenging, because it’s very haunted.

The history of Jerome Grand Hotel

The United Verde Hospital, later the Jerome Grand Hotel, was built in 1926. It was the fourth and final hospital in town. It was owned by the United Verde Copper Company (UVCC) which later became the Phelps Dodge Mining Corporation. The hospital was also known as the Phelps Dodge Hospital. It was a real state-of-the-art facility, very modern and well equipped. The 1926 Otis elevator in the building, for instance, still functions. The 30,000 sq ft building contains no wood inside the structure.

It was built 100% fire- and earthquake proof. It needed to withstand the powers of nature as well as the powers of 260,000 pounds of dynamite. The United Verde Hospital was closed in 1950, due to the fact that the mining operations began shutting down. In the heyday, over 15,000 miners and their families lived in Jerome, after the mines closed in 1953, only 100 people stayed behind. And medical services were available in other hospitals. The building stood vacant for 44 years until it was purchased by Larry Altherr and turned into the Jerome Grand Hotel in 1996.

In the beginning, Jerome Grand Hotel only had 6 rooms available. The rest of the rooms were still under construction and thus empty. Claims of strange happenings started coming in almost immediately after the hotel was opened. Guests  heard voices coming from empty rooms and there were reports of what sounded like a hospital gurney riding down the hallways at night. But, no one was there.

The ghosts of Jerome Grand Hotel

There are many ghosts at the hotel, but some of them are more notable than others. When the building was operating as a hospital, many people died. There are no official records available, but according to some, over 9,000 deaths occured. Most of the deaths were caused by mining accidents, but people also died of other injuries and illnesses. Let’s have a look at the hauntings at the hotel.

Many of the “paranormal complaints” come from the third floor. This is by far the most active floor in the hotel. Guests and hotel staff have heard and seen what appears to be a 4 or 5 year old child. It’s running down the hallway, sometimes giggling, sometimes crying. This child also likes to appear at the foot of the bed. His apparition has been seen in several rooms. On both the third and fourth floor, the sound of a crying baby is heard frequently. There’s also the smell of baby powder and zinc oxide. Sometimes the sound of crying babies alerts guests who then call the reception. But, the sound always comes from an empty room. The third floor is also the domain of a “bearded man”. His identity is unknown but he makes his presence known by coughing and heavy breathing.

The most active and most reported ghost of the hotel is that of a spirit cat. Its origin is unknown. The cat has been heard meowing, hissing and scratching at doors and walls. Guests and staff have reported feeling a cat brushing against their legs, but when they look down there’s nothing there. It also enjoys sleeping in hotel beds, snuggling against a guest. Many people have also claimed seeing a cat’s imprint on the bedding. As if a cat is curled up there. The cat is most active on the third floor.

Claude Harvey was the hospital’s maintenance man. He was found pinned down by the back of the neck by the Otis elevator on April 3, 1935. Autopsy indicated he was already dead when the elevator hit him. It’s safe to assume Mr. Harvey was murdered and somebody tried to make his death look like an accident. His murder was never solved. It’s like Mr. Harvey doesn’t quite realize he’s dead, yet. He continues working as if he’s still alive in the basement which is now the laundry room.

The only known death since the hospital closed down is that of a man named Manoah Hoffpauir. He was a local man hired by the Phelps Dodge Mining Company to make sure the vacant building wasn’t vandalised. He was found hanging from a steampipe in the engineer’s office, now the boiler room. There are claims of shadow figures in this area.

Many guests have reported seeing the apparitions of two ladies, one in a white gown, and another one in a nurse’s uniform. Another ghost has been seen in a long lab coat, presumably a doctor. He’s carrying a clipboard as if he just visited a patient.

Probably the most haunted room at the hotel is Room 32. Two people committed suicide in this room. Room 32 is a former hospital’s guest room with a balcony. A miner, confined to a wheelchair because of an accident, reportedly climbed the balcony and fell to his death. A businessman committed suicide in this room by shooting himself in the head. The most paranormal incidents happen in this particular room.

Coughing, sneezing and labored breathing has been heard throughout the entire hotel. Smells such as cigars (even though smoking is prohibited), whiskey, and a strong scent of flowers are often smelled. Guests hear people pacing in the hallways as well as people going up and down the stairs all the time. The sounds of doors opening and closing are heard a lot, too. People have reported light anomalies, televisions sets turning on by themselves and electrical devices seem to be unplugged constantly. Shampoo bottles sometimes roll across the floor or even come flying across the room. Cell phones and camcorders that are lost are found back again under the bed.

Today, Jerome Grand Hotel still operates. Due to the privacy of the guests, you’re not allowed to wander the guest floors. The lobby and the hotel restaurant called “Asylum” are open to the public. There’s a notebook at the lobby desk filled with paranormal experiences of the guests. They have filled five 300-page notebooks since 1996. So, there’s definitely something going on in the Jerome Grand Hotel!