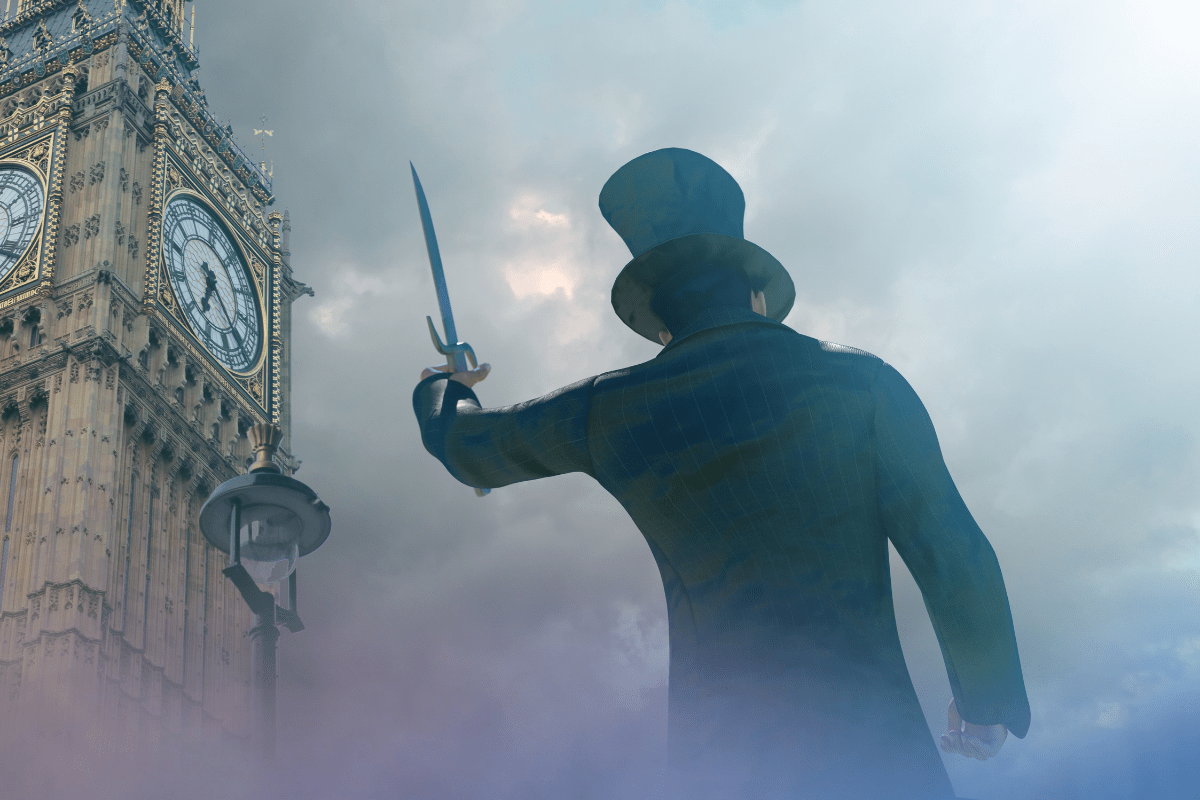 I have been fascinated by the Jack the Ripper mystery since I was 17. This was when I visited London for the first time. When I returned a couple of years later, I visited The London Dungeons, and once more I became intrigued. It’s amazing that no one still knows who was behind the gruesome killings. There are lots of theories and suspects, though.

The Jack the Ripper murders were committed in a time span of only 2,5 months. The murders happened between September* and November. This was when Queen Victoria reigned in an era which is referred to as the Victorian Era. This era is known for its beautiful mansions, specific fashion and the fascination for death. Also in this period, the differences between the rich and the poor were more evident than ever.

The London district Whitechapel was a poor and depressing place to be during the Victorian Era. Many people were drinking their problems away and robbings and murder were common. Some Whitechapel streets were dangerous to go to after dark, but some people, especially women, didn’t have many other options then to challenge them at night. Prostitution was the easiest way to make money to find a lodging for the night or more liquor to escape reality.

People had assumed that all the Ripper victims were prostitutes, but there’s only evidence two of them were selling their own bodies. Fact remains that all of the Ripper’s victims were women who were poor and addicted. Only one of the Ripper Victims had a room for herself. The others tried to find shelter in one of the many lodging facilities in Whitechapel. These shelters were extremely depressing.

In the time of the Jack the Ripper murders, lodging houses were a common phenomenon. These houses were under strict police supervision. Bed linen had to be changed weekly and all windows had to be opened at 10 a.m. to provide ventilation. But the lodging spaces were crammed and beds would be standing closely together. Some lodging houses provided only a rope where people could sleep on by lying over it. The rope would be cut the next day, and all the sleeping people would drop on the floor.

Mary Ann Nicols, nicknamed “Polly” got married at the age of 19. She had 5 children. She and her husband got seperated and her husband took 4 of the 5 children with him to move somewhere else. Mary Ann tried to find jobs, but this was hard because she was clearly addicted to liquor. She was last seen at the Frying Pan Pub (you can still find the remains) on Buck’s Row on August 29, 1888. She was found a little later with her throat and abdomen slit. Her intestines were thrown over her shoulder and her genitals were stabbed in pure rage. The murderer didn’t take any body parts with him, perhaps he was disturbed, or he developed that morbid fascination later.

Annie Chapman, nicknamed “Dark Annie”, was murdered on September 8, 1888. Her body was found on Hanbury Street 29. Annie had been married aged 28 to a man named John Chapman. They had three children together. Sadly, their oldest daughter died at the age of 12 and above that, she lost her husband in 1886. Annie struggled with life and she lost herself in rum to escape reality. Annie was found with her throat and abdomen slit open. This was the first time the killer took a souvenir: her womb was missing.

Elizabeth Stride was a Swedish immigrant nicknamed “Long Liz”. She had been married to a man named John Thomas Stride and they owned a coffee shop in East London’s Poplar. They didn’t have children. The marriage didn’t last, the shop was sold and Elizabeth was forced to prostitute herself. She was murdered September 30, 1888, but the murder was interupted by a man named Matthew Packer. He found Liz when her body was still warm. Jack the Ripper had slit her throat, but he didn’t have the time to mutilate her any further. This gave her another nickname: “Lucky Liz”. But, Jack the Ripper was not at all satisfied that night.

Catherine started drinking and had casual sex to afford lodging. She found a new man named John Kelly. Poor Catherine Eddowes was found looking as if The Ripper had punished her personally for the disturbance earlier that evening. Not only did he slit her throat, her abdomen and did he take her kidney, he also took off an ear and her nose.

Mary Kelly was the only Ripper victim who had an actual place to live. She was also the youngest victim, being only 25 when she was murdered. The other victims had all been in their 40’s. Mary Kelly’s murder was the most gruesome of all: she was literally torn apart by the killer. Her boyfriend, who had left her two weeks earlier, could hardly identify her. This time Jack the Ripper took her heart.

Even though the way Matha Tabram was murdered was not at all similar to the other victims of Jack the Ripper, she is considered a victim. His first, to be accurate. Martha was found in an alley of the George Yard Buildings, August 7, 1888, where she was stabbed 39 times. Thirty-eight of the stabbings were done with a small knife, causing enough damage, but one stab wound was made with a much larger blade. This weapon is most likely the same weapon which was used at the Jack the Ripper murders. The real Ripper probably came across the dying Martha and stabbed her to death, causing his lust for blood.

There were over 100 suspects and lots of theories over who Jack the Ripper could be. The investigation was led by chief Inspector Frederick Abberline, a man who didn’t care about the women because they were just prostitutes in his opinion. A local man, Mr. George Lusk, did care about the murdered women. He was the head of the Whitechapel Vigilance Committee. Lusk didn’t stay unnoted. not even by the Ripper himself. He sent the famous “From Hell” letter on October 15, 1888, along with a piece of kidney. This half-eaten kidney had probably belonged to Catherine Eddows.

The suspects: no hard evidence

When Annie Chapman’s body was discovered, a leather apron was found near the courtyard where her body was found by an old man. The apron led to a 39-year-old man named John Pizer who was a bootmaker. He was nicknamed “Leather Apron” because he always wore one. Pizer was a suspect for killing Annie because he had been held for a previous stabbing offence. And he was heard threatening “to rip prostitutes apart”. He was sent to prison, but had to be released due to a lack of evidence. He then sued the police department.

Francis Tumblety was a 55-year-old American-Irish quack doctor. He was also known as his alias Frank Townsend. Tumblety was known for hating women and he had been bragging about his womb-collection at home. He said he owned wombs from women from all walks of life. He had to be released.

James Maybrick was a 55-year-old cotton merchant from Liverpool. He was married and addicted to arsenic. He kept a mistress in Whitechapel and he was a former Freemason. Now this is an important thing, because some graffiti was found on Goulston Street. It said: “The Juwes are the men that will not be blamed for nothing”. The trigger people thought it was written by a Freemason, was the spelling error made on the word Juwes (Jews). They were the only group writing the word like that. The police took the graffiti off almost immediately, before it could cause all kinds of etnic problems. He also owned a pocket watch with his initials which was found at one of the crime scene. Maybrick was poisoned in 1889.

George Chapman was born as Severin Klosowski. He was a trained surgeon in Poland. He moved to Whitechapel in 1887 and became a barber. He had a violent temper and he often walked the streets at night, carrying a small bag. Chapman was later convicted and executed for poisoning three of his wives.

What do we know about Jack the Ripper?

Not much, that’s for sure, but what we do know is that he was left-handed. And he was quite skilled finding his way inside the human body. The organs were cut out with the precision of a surgeon. As you can see, no one named Jack was ever a suspect. The name came from the killer himself. He signed his “Dear Boss” letters with this name and the media adopted that.

There were some wild theories, though. One of the theories was that Jack the Ripper was the grandson of Queen Victoria. Later, his doctor became a suspect. Even novelist Lewis Carroll became a suspect. People believed the finding places of the victims were hidden as anagrams in his popular book Alice in Wonderland. The Ripper had even been a woman or it was the American serial killer H.H. Holmes, who immigrated to the States after the killings in London. Here he would have built his very own murder castle in 1893. Painter Walter Sickert was also a suspect, named by the American author Patricia Cornwell in her book “Portrait of a Killer”.

The Jack the Ripper mystery today

Jack the Ripper still remains a mystery. But, evidence is still reviewed. In 2014, a major breakthrough was made when dna pointed at the Polish immigrant Aaron Kosminski. His blood and semen were found on a scarf which had belonged to Catherine Eddowes. The fact he made a lot of spelling errors in his “Dear Boss” letters, might also conclude they were written by a non-English native. He was arrested a month after the death of Mary Kelly for another offence. But because the DNA was contaminated, the find is not conclusive. Perhaps we’ll never know!

*Even though the 5 murders directly linked to Jack the Ripper started from August and lasted until November 1888, there is a possibility the first murder took place in August that same year.