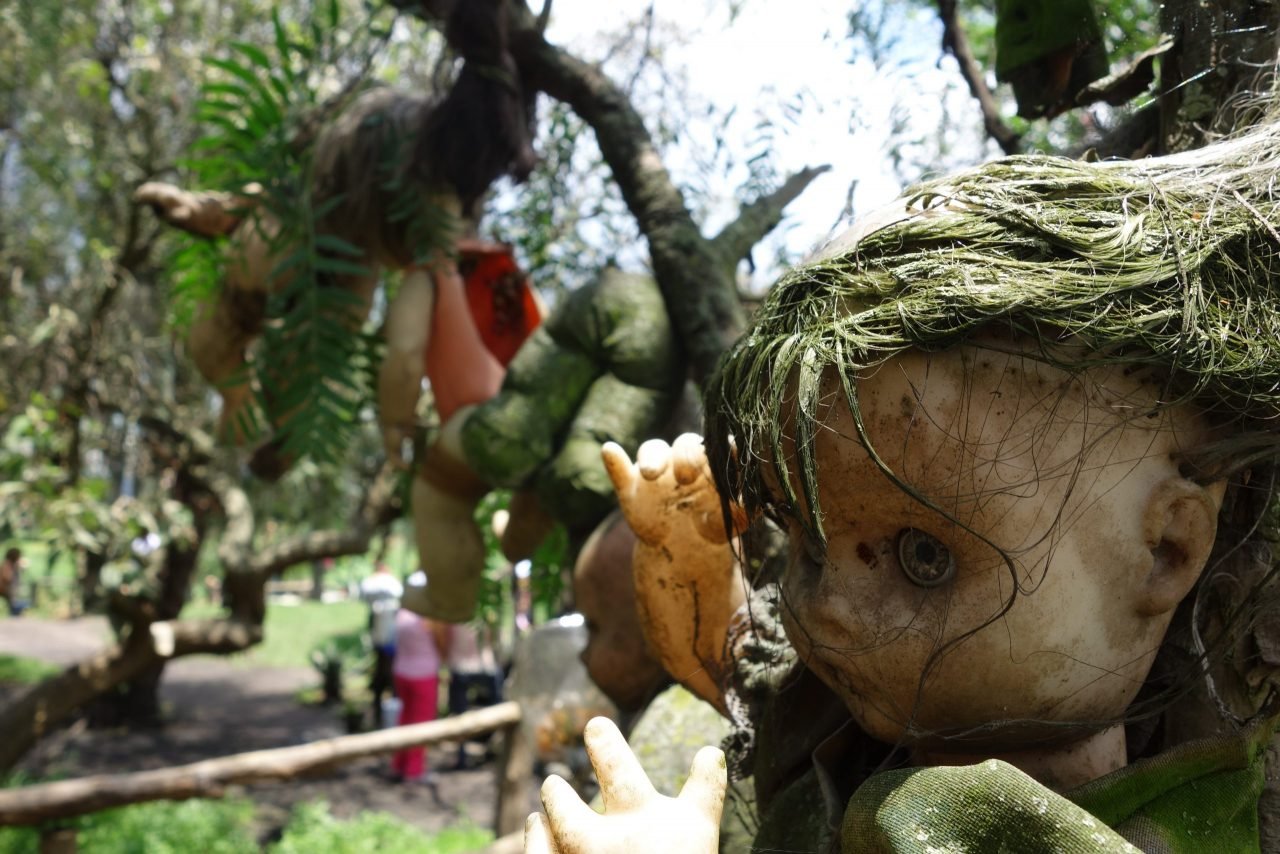 I’m not particularly keen on clowns, but I genuinely fear dolls. I didn’t even like them when I was a little girl. Why? Because there are plenty of haunted dolls in the world. And did you know there’s a small island in Mexico which is literally crowded with them? Welcome to la Isla de las Muñecas, or better known as: The Island of the Dolls.

La Isla de las Muñecas can be found in the Xochimilco canals in Mexico. The Xochimilco canals have legends of their own. During the day, the canals literally buzz with activity. The canals will be brightly colored by the many so-called trajinero’s (boats) and flower, fruit and vegetable merchants. That’s why they are called floating gardens. But after dark, locals avoid these waters. They say evil and demonic creatures lurk under the surface. Most feared are the Nahuales; dark entities who can disguise themselves as animals such as fish and black leopards. They wait beneath the surface to take the lives and souls of unexpected travelers.

Other dark entities that are said to haunt the waters are entities that can change into black eyed little girls. They try to lure their victims into the water to drown them. Victims of these entities are never found. Another spirit who roams the grounds near the canals is that of La Llorona. This is a woman who is in desperate search of her children. Legend says she killed her own children first, but now cries and weeps for them. Locals fear the canals at nighttime and don’t feel comfortable talking about them.

These ghostly legends find their origins in the past, when the Spanish conqueror Hernán Cortés visited this Aztec land. His first visit was friendly. He even got a tour around the area. But when he returned from Spain the second time, he returned with an army. He slaughtered everyone who was in the way and plundered villages. He wiped out most of the Aztec population. More than 30.000 bodies were dumped into these canals. This probably opened a paranormal pathway, allowing the evil entities to travel from their dimension into ours.

In the middle of these canals, a small island can be found. The owner of this little floating island was a man named Julian Santana Barrera. He was leading a peaceful and isolated life until he found a small girl in the water near his island. He tried to pull the child out of the water, but it was too late. The poor child died in his arms. Julian never really got over this traumatic event.

Just a few days after Julian found the little girl, he got another scare. He thought another girl was drowning at the exact same spot. But when he took a closer look, he saw that it was just a doll. Because the doll was floating at the same spot, he was convinced the doll was sent by the little girl. He even believed the girl’s soul was inside of it. So, to honor the girl, he gently took the doll out of the water and hung it in a tree.

Poor Julian couldn’t handle the fact that he hadn’t been able to safe the girl’s life. One single doll just wasn’t enough to keep her happy. So, Julian started collecting old, broken dolls and gave them a place in that tree as well. Shortly, he had collected so many dolls, that they didn’t fit in the tree anymore. So he started decorating his entire island with them.

As if dolls aren’t creepy enough, the weather conditions, jungle creatures and vegetation started taking over the dolls. Their eyes turned milky white, or simply disappeared, leaving a black hole. Their hair got tangled with huge cobwebs and limbs would come off. Black mold would eat its way into their faces, turning them into creatures from hell.

Many believe the dolls are inhabited by ghosts and not just the one from the little girl. Some have seen the dolls move their heads, wink and even talk. This happened when Zak Bagans and his Ghost Adventures crew visited this eerie island. One of the dolls started talking with its mechanical voice. It had clearly been up there for many years, so the batteries must have been dead for a while. Oh creeps, another reason to hate dolls!

The death of Julian

To make things even more creepy than they already were… Julian Santana Barrera died from drowning at the exact same spot in the canal as the girl did in 2001. Do you think he was a victim of the Nahuales? And does his spirit now live inside a doll, as well? After his death, the island was opened to the public. Would you be brave enough to visit the island?

Do you want to read more stories of haunted places in Middle- and South America? Click here!